One of the most encouraging aspects of running this site is seeing the sheer amount of information coming in every day about nonviolence. It’s often-times too much to process, at least quickly. Such was the case with an inspiring book that came out in October called Small Acts of Resistance. But with reviews still popping up even a couple weeks ago, I figured it’s not too late to add one of my own. 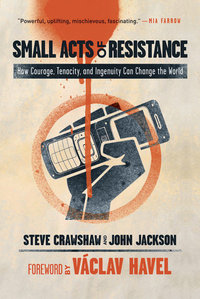 Written by seasoned social activists Steve Crawshaw and John Jackson—who now work for Amnesty International and MTV, respectively—Small Acts of Resistance is a breezy, but exciting tribute to the activist spirit. The book chronicles 90 stories from around the world—focusing mainly on the past few decades—of ordinary people taking bold, creative and often-times humorous action to defy and ultimately reverse injustice.

The authors attempt to categorize these stories into an eclectic mix of chapters, jumping from sports to censorship to eventually the end of the Cold War and the rise of digital activism. But with no real consistency to the categories, the book is mainly a loose amalgamation of short stories. As the Financial Times noted its review: “Each is only a few pages or less, sometimes leaving a sense that rough but potentially significant corners have been rubbed off.”

Rather than see this as a shortcoming, however, I think the simplification of these stories makes for a highly accessible and much-needed introduction to the field of civil resistance. It would be a great jumping-off point for beginners, providing a natural path to more in-depth discussions of both nonviolent strategies and principles.

But thankfully Small Acts is more than just a fun read for newcomers. It also packs a few surprises for those who have tried to consume as much of the literature that’s out there. For instance, did you know the word boycott comes from Captain Charles Boycott, a 19th-century tyrannical land agent in Ireland, whose servants walked out on him? Even though the action sounds more like a “strike”, I was happy to grab this nugget of information.

There are other surprisingly fresh stories, such as the one about football fans in Uruguay, who during the military dictatorship mumbled the national anthem until it came to the line, “May tyrants tremble!” Or, there’s the one about Nepalese journalists who avoided harsh censorship rules by presenting the news as entertainment and having a comedian sing it.

If these aren’t new to you, then there are bound to be others that are. That’s what’s so inspiring about this subject: there are more stories exhibiting the power of nonviolent resistance than any one person can possibly know. And that’s okay. One person doesn’t need to know all the stories. But everyone should know at least a few. Maybe Small Acts of Resistance will help in that endeavor.