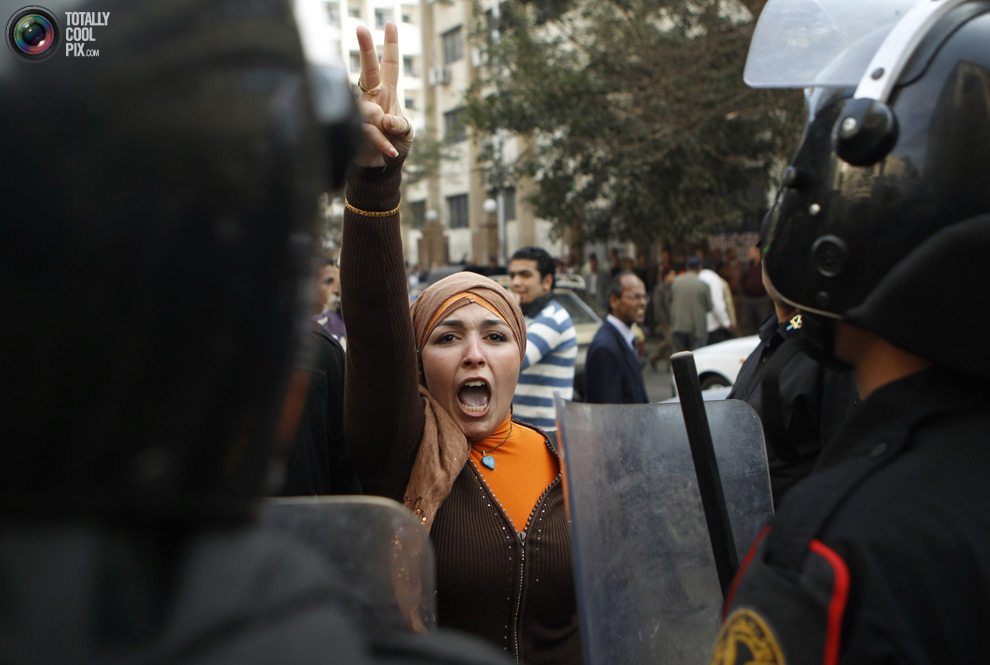 All men recognize the right of revolution; that is, the right to refuse allegiance to, and to resist, the government, when its tyranny or its inefficiency are great and unendurable.   – Henry David Thoreau (Walden and Civil Disobedience)

Like so many people around the world, it has been difficult to pull myself away from the television and internet over the past three days. The events that unfolded in Tunisia, and now in Egypt, are what many of us in the field of civil resistance have long anticipated – a nonviolent uprising of people against their corrupt and repressive rulers in the Middle East and beyond. I am elated and also nervous.

The unity evident in Egypt’s struggle is inspiring.  News reports, Facebook updates and Tweets offer clear signs of mass representation – middle class, young, old, Christians and Muslims, men and women, increasingly defecting soldiers, and most recently, members of the judiciary.  I have been encouraged by the active participation of women, although that aspect is widely unreported by the media. Essentially, people are united in the desire to see their 30-year president leave, and see a more democratic and transparent form of government for their country.

Also encouraging is the involvement of women bloggers, journalists, educators, civil society leaders, and Egyptian diaspora spokeswomen. They are making it known that their action and commitment is greater or equal to men’s. I particularly appreciate the views offered by Mona Eltahaway, an Egyptian journalist who challenged CNN’s reporting recently, and Noha Atef, an Egyptian blogger who runs the Torture in Egypt site (access currently forbidden). Noha candidly discussed recent events and helped set the record straight on women’s participation:

The women have been in this struggle from its beginning, I don’t mean just on the 25th of January 2011, but even before this, since 2005, when the chant, “Down with Mubarak” was first heard. And in the hundreds of strikes that took place between 2007 and 2010, women were both organizers and participants.

Recent reports offer evidence of another success of this popular struggle – an adherence to nonviolent discipline.  Although mainstream media are reporting looting and crime, street reports and citizen interviews offer another picture — a series of local, alternative institutions being established by citizens in the absence of a functioning police force. Egyptians have put together neighborhood watches and protection committees to guard homes and neighborhoods and prevent street crime and vandalism of historic sites.  Where government institutions are absent, ordinary people are stepping in.

Another form of creative social intervention being employed is the alternative communications systems that Egyptian citizens have developed.  When internet access was abruptly interrupted by the regime, citizens resorted to word-of-mouth organizing, paper pamphlets, and good old-fashioned landlines. Egyptians continue to overcome the news and communications blackout by creating their own grassroots mechanisms for passing information.

The character and content of the protest is overwhelmingly based on national issues, many which trickle down to local issues – social, economic and political — felt by Egyptians every day. The “spark” that ignited the protests can be debated, but there is no doubt that an uprising has been brewing for many years.  The April 6 Youth Movement was mobilized in 2008, just one among several citizen action groups that Egypt’s government has had to confront. The April 6 Movement offers solid evidence of Egyptians’ growing use of social media to mobilize around collective grievances.

The past days’ events in Egypt are incredible. What concerns me, though, is the possibility of exhaustion resulting from overuse of a single tactic – protest. Gene Sharp’s 198 methods of nonviolent action offers a lengthy list of historical instances of nonviolent struggle. Today, the list is far longer due to continued creativity of activists around the world and the continued role of technology in expanding the repertoire of nonviolent tactics.  The effectiveness of protest is evident in Tunisia previously, and now in Egypt, but it may not be sustainable over a prolonged period (weeks or months). Vigils, sit ins, work and education strikes, various creative boycotts, in other words, extensive noncooperation, could be an effective strategy to help society regroup, while maintaining persistence and riding the current enthusiasm of citizens.

Another concern is the turn the struggle could take – from a focus on national change to a rage against the West generally.  Protests are currently not directed at the West, yet there is no doubt that Egyptians are frustrated with the U.S. long-standing support of Hosni Mubarak as well as the current U.S. response to the uprising.  I fear that Egyptian frustration will shift and be derailed, from a focus on national issues to a blaming of the U.S. and Europe. This would be a major distraction and could diffuse the current goal(s), making it more difficult to sustain mass participation. Such a shift in targeting and messaging could also jeopardize the current global citizen solidarity with Egyptians. It could make it more difficult for Western governments, already awkward and tentative, to openly stand behind the Egyptian people.

This leads to another point: the importance of maintaining a very concrete vision and stated goals, and articulating them continuously and as clearly as possible.  The movement has a goal — many Egyptians have articulated very clearly their desire for a new and democratic form of government. But as time goes on, it is possible that frustration in the street could lead to a loss of focus and direction.  A great discussion with many theorists and practitioners in the field of nonviolent action on vision and strategy took place in 2008, hosted by New Tactics in Human Rights. And a downloadable volume On Strategic Nonviolent Conflict, by Robert Helvey, offers a activists a framework for thinking and planning in an orderly manner.

Finally, I worry about unwanted cooptation and a possible lack of preparation for democratic consolidation. This is connected to the previous points on vision and goals. Egyptian people must be unified and focused in what they want for their future. This means being able to articulate the kind of political system, the types of institutions, and the type of leaders who will respond to the grievances of all Egyptian people. People will have to be firm on who represents them and how leaders will be selected. This is an amazing opportunity for change in Egypt, and its citizens will have to persist far beyond these protests in order to achieve lasting change through a democratic process.  Egyptian civil society should be preparing right now.

Below, I share what I believe are some of the best resources on civil resistance. They’re worth sharing not only with Egyptians but with people in countries that are gaining confidence through Tunisia and Egypt’s people power movements.  I do not exclude my own countrymen/women in the United States from the suggested distribution, as we need to reflect, decide and plan what we want for ourselves, and understand how to effectively fight for it. U.S. citizens can also learn from our own history and scholars in civil resistance, such as Henry David Thoreau, who in his 1849 text, Civil Disobedience wrote: “I think it is not too soon for honest [wo]men to rebel and revolutionize.”  I agree. And right now, it’s Egypt’s moment.

When the people lead, leaders follow — lessons from the fight to impeach and remove Trump