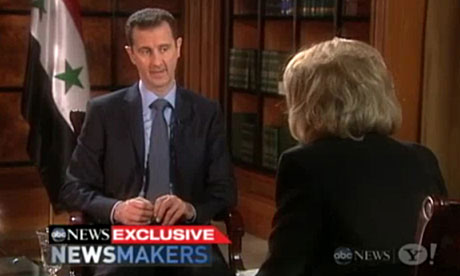 Crazy is a word ‘normal’ people throw around when they either don’t understand something, they’re totally disconnected, or wish to absolve themselves of responsibility. “We don’t kill our people… No government in the world kills its people, unless it’s led by a crazy person,” Syrian President Bashar al-Assad said this week in a recorded interview. Does Assad not understand, is he disconnected, or is he crazy? I don’t think it’s either one of those choices. And to even consider that his actions against the Syrian people can be explained by calling him crazy is an insult to the idea of what crazy really is.

Why did Assad himself use that word? I believe that it was a default response in order to buy time and to claim innocence. His audience was his supporters and the international community. How could an eloquent, educated, English-speaker dressed in a suit on international television be crazy, in the sense of being insane? Of course he’s not. Assad is deliberate, cruel, struggling to hold power, and he completely disregards the aspirations of his people. Calling him—or any other authoritarian leader trying to repress his own people with military force—crazy is a misuse of a complex and misused term.

The definition of crazy ranges from insanity to impractical to impatience to infatuated. It’s not surprising that the word ‘crazy’ is often used to describe protestors, civil movement leaders, and most recently, Occupy Wall Street activists.

Interestingly, the word crazy, has the Scandinavian root origin “craze,” 1325–75, Middle English, crasen to crush; and the Swedish, Norwegian word krasa: to shatter or crush. Shatter…. to break the mold, to break away from the old.

Fighting for injustices and challenging the status quo requires not only a level of impatience and infatuation, but also a steady determination to shatter a system.

In 1963, Dr. Martin Luther King offered justification for his lack of patience in his Letter from a Birmingham Jail. Dr. King tempered impatience with sustained analysis and planning, while justifying constructive, nonviolent tension as necessary for growth.

We know through painful experience that freedom is never voluntarily given by the oppressor; it must be demanded by the oppressed. Frankly, I have yet to engage in a direct action campaign that was “well timed” in the view of those who have not suffered unduly from the disease of segregation. For years now I have heard the word “Wait!” It rings in the ear of every Negro with piercing familiarity. This ‘Wait’ has almost always meant ‘Never.’ We must come to see, with one of our distinguished jurists, that “justice too long delayed is justice denied.

The revolutionary movements we have witnessed this year, including most recently protests in Russia that brought nearly 60,000 people to the streets, are often written off by political leaders and elites who mostly live in opulence as actions by liberal, drug-induced, crazy youth. And I suppose it’s easy to dismiss nonviolent action as crazy when you’re comfortable with things just as they are because they fit into your worldview and don’t challenge institutional learning (i.e., the markets correct themselves, wealth always trickles down, risky financial bets will always raise profits).

A Google search of “why crazy is good” will take you to many sites that assert how being crazy is positive: Why women aren’t crazy; why crazy questions are good for innovation; why are all the good teachers crazy; why crazy people make better bloggers, and so on. Those sites infer that crazy is bold and creative, that it reaches beyond “normal” and helps create a new vision.

Perhaps we should take back and embrace the word “crazy’” and transform it into the new normal. It’s certainly not a word that describes Syria’s Assad or other dictators and human rights abusers. Women, youth, union leaders, bloggers, tweeters, journalists and so many other groups in Egypt, Bahrain, Tunisia, Syria, Russia, and in New York, D.C., Los Angeles and elsewhere in the U.S.—they are crazy. They’re impatient and ready for change, they’re passionate for human rights, and they’re infatuated with the idea of freedom (from political and economic tyranny). They are shattering the narrow boundaries that have been imposed on them. And that’s not insane.

Here’s to all the crazy people who are realizing their own power and are helping shatter corrupt and unjust systems around the world. Yes, we are crazy, and crazy is good.

5 things to be thankful for this Thanksgiving