For nearly six years, the Palestinian residents of the West Bank village of Bil’in have held a weekly nonviolent demonstration against the separation wall—a barrier cutting through large portions of Palestinian land that has been declared illegal by the International Criminal Court and the Israeli High Court.

A reported 1,000 people gathered for last Friday’s weekly demonstration, declaring the last day of the decade to also be the last day of the wall on Bil’in’s land. But the pronouncement and the ensuing attempt to break through the wall were marred by the tragic death of 36-year-old Jawaher Abu Rahmah, who died as a result of being poisoned by the active ingredient in tear gas. 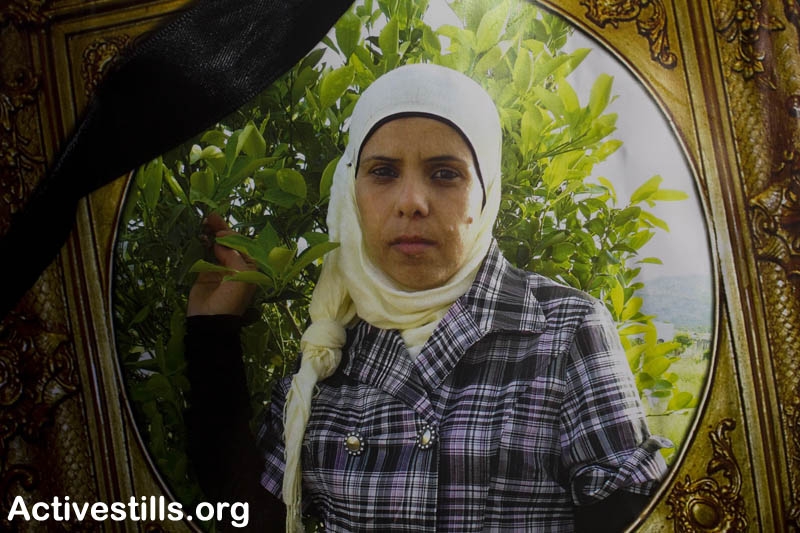 Abu Rahmah is survived by four brothers, one sister, and her mother, Subhiyeh, who also lost her son Bassem in 2009 during a demonstration in Bil’in. He was killed by the Israeli military when they shot him in the chest with a high-velocity tear gas canister. Another of her sons, Ashraf, was shot by Israeli forces while blindfolded and under arrest.

Subhiyeh has nevertheless rejected notions of revenge and instead called for joint Israeli-Palestinian resistance to the occupation in the face of the killing of her daughter:

I brought my children to the world with love and I educated them to believe in peace and not to act violently. Out of six children, I have four left. I’m not complaining because it’s not in our hands. God decides what will happen. I ask the people of Israel to take a firm stand against the occupation. They must support our just struggle against the fence and for the liberation of the lands we were robbed of, because only together we’ll be able to put an end to the tragedy of our two people.

Heeding the call of Jawaher’s mother, Israelis took to the streets in Tel Aviv on Saturday, gathering in front of the Defense Ministry, to protest the killing of Abu Rahmah. Approximately 200 people blocked a main traffic artery while publicly decrying the actions of their government. Tel Avive-based journalist Lisa Goldman described the protest:

Waving mourners’ posters emblazoned with photos of Jawaher Abu Rahmeh captioned in Arabic, and carrying placards with slogans in Hebrew and English, demonstrators chanted in Hebrew: “Citizens, awake! Fascism is already here!” “Barak! Barak! Minister of Defense! How many demonstrators have you killed today?!” ; in English: “Apartheid! Fight back!”; and in Arabic: “Min Ghaza el Bil’in, hurra hurra Falasteen!” (from Gaza to Bil’in, freedom, freedom for Palestine).

Israeli riot police unsuccessfully attempted to disperse the crowds and eventually moved to making arrests. Eight Israelis were arrested, including former member of the Knesset Mossi Rav. After 90 minutes of standing vigil at the Ministry of Defense and blocking the intersection, the protestors moved to the police station to wait for the release of those who were arrested.

In the second protest against the killing of Jawaher Abu Rahmah, 25 activists returned American-made tear gas canisters, used in the village of Bil’in, to the home of the US ambassador to Israel, James B. Cunningham. According to Jerusalem-based activist Joseph Dana:

The demonstrators also made noise throughout the ambassador’s neighborhood, informing residents of how American military aid to Israel is being used to kill unarmed and nonviolent demonstrators in the West Bank. They chanted, “one, two, three, four stop the occupation stop the war. Five, six, seven, eight end the funding (US) end the hate.” This action is one of the first by Israeli activists demanding accountability of a foreign government. Instead of targeting the Israeli public, activists did a symbolic act aimed at the United States.

Those arrested have been charged with illegal demonstration, resisting arrest, and attacking the US ambassador’s home. The police claimed that some of the tear gas canisters—which had been collected from the ground in Bil’in and then tossed onto the property of the ambassador—were unspent and therefore weapons.

The tear gas used in Bil’in is manufactured by the Pennsylvania-based company Combined Systems Inc. and has been banned due to its high level of toxicity—the lethal effects of which have even been documented in a study commissioned by the Federal Bureau of Investigation.

Jawaher Abu Rahmah is the 21st unarmed demonstrator to be killed by the Israeli military since 2005. A shocking 10 of the 21 were minors. Despite the rising death toll, many Palestinians, with the support of Israelis and internationals, remain committed to nonviolent resistance. As the deputy head of the Bil’in village council, Mohammed Abu Nizad, stated after the killing of Abu Rahmah:

“I believe in non-violent action against the fence and the occupation and in favor of peace. We will continue our struggle until the occupation leaves our lands and we establish our state and live in it in peace. We are waiting for the Israeli public to realize that apart from ending the occupation, there is no other way to achieve a life of peace and security.”

What will it take to ban the bomb?