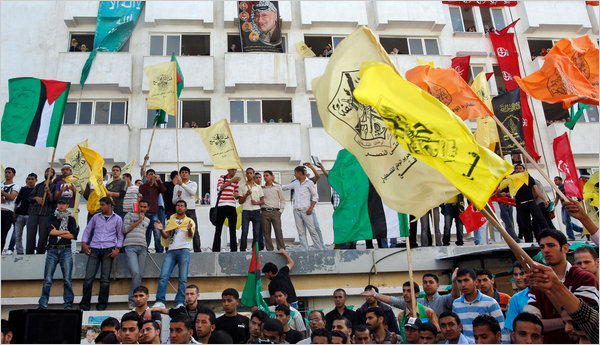 Angered by the reconciliation agreement and the possibility of Hamas gaining legitimacy, Israel quickly froze more than $86 million of tax revenues collected on behalf of the Palestinian Authority. Rather than holding Israel accountable for seizing money belonging to a foreign government, the European Union agreed to provide additional aid to the Palestinian Authority to help cover the cost of government employee salaries and welfare payments.

Predictably, most Western governments have been slow – if not, unwilling – to celebrate the joining of the Palestinian governing parties. Politicians and government spokespeople have returned to parading around worn-out rhetoric about the preconditions to be placed on Palestinians before the ‘dog-and-pony-show’ peace process resumes. Britain and the United States both made statements calling on Hamas to renounce violence and to recognize Israel (if you think Hamas is unique in this respect, please remember the Likud charter which rejects a Palestinian state), or else the Fatah-Hamas coalition may be left out in the cold. These demands are reminiscent of Obama’s words in Cairo in June 2009:

Palestinians must abandon violence.  Resistance through violence and killing is wrong and it does not succeed.

Hamas does have support among some Palestinians, but they also have to recognize they have responsibilities.  To play a role in fulfilling Palestinian aspirations, to unify the Palestinian people, Hamas must put an end to violence, recognize past agreements, recognize Israel’s right to exist.

Any mention of Israel’s need to abandon violence was absent from Obama’s speech in Cairo, as it is now absent in the statements that followed the Hamas-Fatah reconciliation agreement.  Western powers have been continually harping on Hamas, since their democratic election to power in 2006, to abandon violence and any forms of armed resistance. Even following Wednesday’s agreement with Fatah, Hamas maintains their right to utilize armed resistance, a right that happens to be supported by international law. What has changed is the new agreement that Hamas and Fatah will (theoretically) be in consultation on a variety of governance issues, including chosen forms of resistance.

The Wall Street Journal reported on the behind-the-scenes conversations between Palestinian Authority leader, Mahmoud Abbas, and Hamas’ political chief, Khaled Meshaal, regarding the issue of resistance to the Israeli occupation of the West Bank and siege of Gaza Strip:

Aides to Mr. Abbas said that in closed-door negotiations in Cairo ahead of the signing of the Egypt-brokered reconciliation agreement, Mr. Meshaal said his movement was prepared to adopt a strategy of nonviolent resistance, at least for the time being. “They accept nonviolent resistance. That’s what Meshaal said in closed meetings,” said Nabil Shath, a senior aide to Mr. Abbas who was present in those meetings. “He said ‘we cannot do violence and you do nonviolence. It does not work out.’ “

What’s important here is not the agreement itself, personally I hold little hope for change with this reconciliation because Israel continues to hold all the cards – with the necessary support of the West, specifically the United States – while Palestinian political factions continue to play with fake money. Israel is collectively punishing Palestinians, through the withholding of tax revenue, as it attempts to keep the West Bank and the Gaza Strip diplomatically severed. The United States, Israel, and other Western governments issue carbon-copy statements about the need for Hamas to renounce violence; meanwhile, Israel gets a pass as it daily uses violence to suppress nonviolent demonstrations across the West Bank.

Violence used to resist illegal occupation, land annexation, demolitions, and the transfer of Israeli citizens into occupied Palestine territory is illegitimate. Yet, violence used for the purpose of maintaining and expanding empire is legitimate, and continually defended.

It wasn’t hard to predict the West’s demand that all Palestinian political factions renounce violence and recognize Israel while asking nothing of Israel in return, but the imbalanced rhetoric helps to remind us of the hypocrisy of it all.

US activists to launch boat to Gaza