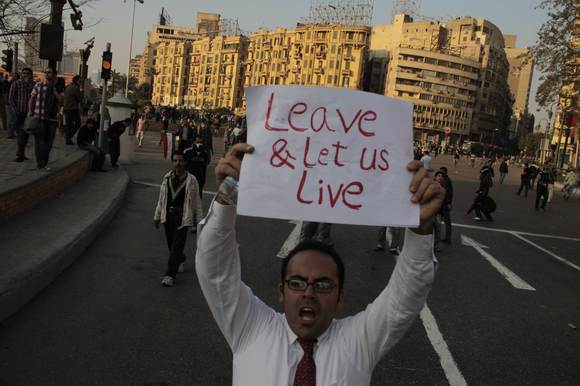 The massive anti-government protests that flared in Egypt yesterday, in which tens of thousands filled the streets of several Egyptian cities, was perhaps the most dramatic display of civil unrest the country has seen in decades. Most media sources have been quick to link the protests to the recent Tunisian uprising, hinting that it may be a sign of a domino effect taking place across the region. But how much of this early analysis is just misinformed anticipation? Jack DuVall, president of the International Center on Nonviolent Conflict in Washington DC, spoke to this concern in an interview with Waging Nonviolence yesterday:

Egypt has had what might be called the formation of an inchoate movement based on students, labor, human rights activists and traditional opposition parties—both left and right (if you can classify the Muslim Brotherhood as right). It’s been going on for several years and it would be unfair to them to say that the protests today are a function of Tunisia. Whoever called the protests today probably was expecting a response because of Tunisia, knowing there would be enthusiasm to participate. And there were a lot of people who did come out. But I don’t think one should place too much political importance just on what has been happening today and it certainly shouldn’t be attributed to what is happening in Tunisia.

Jamila Raqib, the executive director of the Albert Einstein Institution in East Boston, echoed this sentiment.

To view the events taking place in Egypt as simply inspired by Tunisia, with no attention given to an ongoing struggle for human rights and an end to Mubarak rule (that has been waged for decades) would be a mistake. What is happening has been brewing for a very long time, and what we see is a result of at least some planning. To what degree, we don’t know, and certainly the effectiveness of the struggle as it continues will depend on the degree to which planning was involved.

Rather than pinpoint the uprising in Tunisia as the catalyst, DuVall suggested more attention be paid to the recent events in Lebanon, where thousands have been protesting Hezbollah.

Lebanon needs to be looked at closely too because that could be the beginning of a long period of both traditional political instability as well as two different civilian based movements in the streets—a recrudescence of the so-called Cedar Revolution, which is based on Sunni Arabs and Christians as well as an indigenous Lebanese opposition allied with Hezbollah. Part of this is a traditional jockeying for power mirrored by supporters in the streets, but some of it is really home grown. It’s absolutely interesting because of the so-called Cedar Revolution, which forced the Syrians to get out of Lebanon and was a major accomplishment of people power. Lebanese have a fair amount of experience with people power unlike the Tunisians. So what is now beginning to happen in Lebanon may be of more importance if one is just paying attention to the history of people power than what has happened in Tunisia—not to take anything away from what the Tunisian protesters accomplished.

All potential influences and inspirations aside, the events in Egypt could not have honestly been foreseen, according to Raqib.

The events in Egypt could not have been predicted by anyone, especially in terms of how rapidly they took place. There have been predictions about a possible domino effect similar to what happened in Eastern Europe with the collapse of Communist governments, however, there were and remain too many unknown factors that prevent us from drawing any meaningful and definitive parallels.

What I am hearing and reading about is the definite spreading of a new awareness: that people are not helpless in the face of repression, that the seemingly all-powerful dictatorships in the region—against whom struggle was perceived as futile—are actually not so powerful when faced with the real power of ordinary people, and that bringing about massive change is not predicated on the use of military power by a foreign government. It can happen organically, self-reliantly, and nonviolently, and also, importantly, with less casualties than a protracted guerrilla struggle or terrorism. This change can come not only without the help of outsiders, but perhaps even in spite of their support for the opponent, or even their attempts to derail a popular movement. What an amazing realization with massive, far reaching consequences!

That awareness on its own is not enough, however.  What needs to take place is a process of careful thinking and planning. One danger is that what occurred in Tunisia (while stunning) will give the impression that people, with simple protest and no real planning or strategic thinking, can produce sweeping and long-lasting, positive political change so quickly. In most cases, it is much more complex.

Even in the case of Tunisia, affecting positive political change is still complex, as DuVall explained.

There was no movement [in Tunisia] and that’s why elements of the old regime as well as traditional opposition parties began to immediately occupy a vacuum and there is now a struggle for power in Tunisia. Movements are a struggle for power, but if there is no movement and only protest, all it is is an uprising… The best distinction that can be made is between civilian based protest and organized campaigns or movements using civil resistance in order to accomplish a more decisive political change in a country. When the latter happens, as it’s happened historically, then there can be something that you could call a revolution.

So, rather than jump to conclusions about the direction of events in Egypt, perhaps the best thing we observers from afar can do is applaud the willingness of ordinary people to resist a corrupt and dictatorial regime and encourage further use of nonviolent means. The existance of that kind of bravery is the one thing we can be sure of.

Why a movement is never a farce

Understanding the protests in Egypt