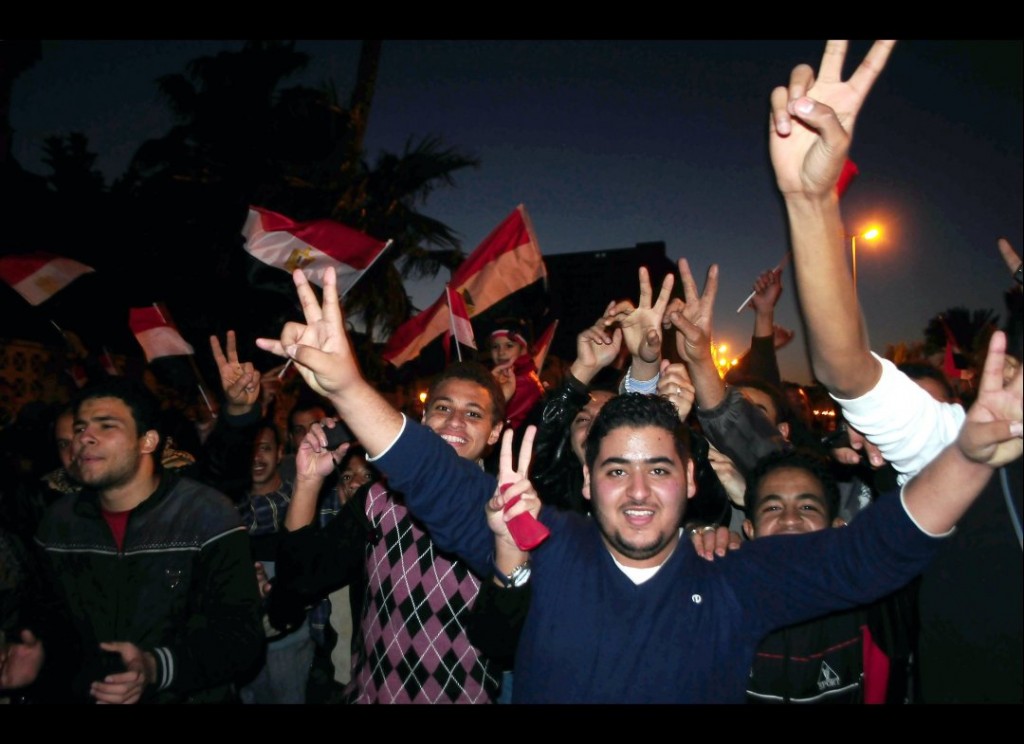 The movement that ended President Hosni Mubarak’s thirty year autocratic rule not only has created a spectacular breakthrough for Egyptian democracy, it has bequeathed a priceless gift to the rest of us in every part of the planet.

For eighteen days the Egyptian people carried out an unarmed revolution with determination, creativity, and a daring willingness to risk.  They marched, they improvised, they prayed, they connected with one another.  Most of all, they stayed put—and invited the nation to join them.

Faced with a corrupt and dictatorial police state, such a movement might have been tempted to wage armed struggle. Instead, they reached for, experimented with, and remained largely steadfast about another way: nonviolent people power.

Hence the tactics they chose: Massive demonstrations, brazen and ubiquitous use of social media, befriending the army, work stoppages, and eventually the call for a general strike.

Nonviolent people power operates on the assumption that systems of violence and injustice are not absolute and implacable.  Rather, they are kept in place by pillars of support.  These props include the police and army; the media; economic forces; cultural and ideological structures; and the general population.  The job of a nonviolent resistance movement is to remove this support.  Key to this process is alerting, educating, and mobilizing a growing number of people throughout the nation or society to withdraw their consent – and to overcome their fear of the consequences for doing so.

By staying this challenging course over the past three weeks – in the face of jailings, torture, organized thugs, demonization by state media, as well as a series of government half-measures designed to prevent real change – the Egyptian pro-democracy movement pulled down these pillars of citizen consent, economic viability, a number of elites, and even state media.  (According to an Egyptian blogger who writes as Zeinobia, one of the state television news readers today said, “We apologize, we read lies against our own will.”)

As each of these supports gave way, the Mubarak presidency, despite its hubris and long-time projection of invincibility, was rendered powerless.

The gift that the Egyptian people have placed in each of our hands is the crystal clear example of the power of ordinary people to unleash seismic social change.  It is the latest in an increasingly long line of such examples—from the labor movement and the struggle for women’s suffrage, to the Indian Independence movement and the US Civil Rights movement, to the string of breath-taking nonviolent people-power movements that have toppled dictatorial regimes, including in the Philippines, Chile, the Soviet Union, Indonesia, Serbia, Georgia, Ukraine, and Tunisia.

Each of these prior cases has been incalculably important.  What makes the accomplishment in Egypt especially valuable to the rest of the world at this time, however, is that (given the determination of the demonstrators, the stubbornness of the regime, and the ubiquity of social media and other technological innovations) many of us were able to follow this struggle step by step in real time and to therefore see in minute detail how this kind of monumental change happens.

We were able to see this campaign in slow motion: the initial call, the gathering momentum, the series of repressive attacks, the galvanizing power of Days of Prayer, the lulls, the unexpected developments (the release of Wael Ghonim, for example, and his electrifying television interview), the government’s ineffective sticks and even more ineffective carrots, the wave of strikes that began to spread across the country, the much anticipated resignation speech that turned out to be a defiant declaration of authority, and then the undoing of that authority the next day.

This eighteen day saga riveted the world.  It offered us a new, three-dimensional awareness of our power to make change through determined, nonviolent action.  And it offers us a glimmer of hope as we stand at a monumental crossroads in human history.

In a time of virtually permanent war, growing poverty, threats to civil liberties, ecological devastation, and many other problems, humanity faces the challenge and opportunity to choose powerful and creative nonviolent alternatives. We can continue to opt for the devastating spiral of violence and injustice, or we can build civil societies where the dignity of all is respected and the needs of all are met. True peace and long-term human survival depend on this.

Egypt gives us a clear and radiant example of the nonviolent option.

As President Obama said in a press conference after Hosni Mubarak’s resignation, “It was the moral force of nonviolence, not terrorism, not mindless killing but nonviolence, a moral force that bent the arc of history toward justice once more.”

For eighteen days, Egypt “mainstreamed nonviolence.”  Mainstreaming nonviolence does not mean creating a utopia where conflict, violence, and injustice do not exist. Instead, it is the process of nurturing a culture that advances nonviolent options for addressing complicated challenges in ways that are neither violent nor passive.  We have much to learn from this powerful experiment in this peaceful and determined struggle for justice.

All of us owe debt of gratitude to the pro-democracy movement in Egypt for this monumental gift that reveals for people everywhere the power and possibilities of nonviolent change in a world wracked by violence and injustice.

Another step toward mainstreaming nonviolence