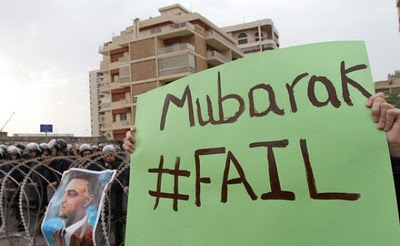 As we’ve noted on this site before, humor can be a very effective tool in nonviolent conflict. This has proven true in the ongoing uprising in Egypt as well. (Check out our comedy tab and this great conversation on the subject between activists over at New Tactics to dig deeper.)

Yesterday, Jack Shenker, one of the Guardian’s correspondents in Cairo, reported on one creative use of humor by protesters in Egypt:

A new tactic is to put out fake press releases, spoofing the official statements issued to journalists by government ministers. Take for example this announcement from newly-appointed prime minister Ahmed Shafiq on Friday (sent by the Ministry of Information):

Prime Minister: Protestors will not be forced to leave

Speaking to an Arab Satellite Channel Dr. Shafik stressed that demonstrators were free to remain in the Tahrir Square, and that no one would be arrested for participating in the protests so long as they had not committed an act of violence or vandalism.

And now the response from a group of protesters in Tahrir, sent to me this morning:

Protesters: Mubarak will be forced to leave

Tahrir – Pro-democracy activists reiterated their commitment that the existing regime would be forced to leave government.

The overwhelming consensus in the participatory, democratic arena of Tahrir Square, was that Mr Mubarak would be free to flee to the country of his choosing, and that he would not meet his just rewards, despite his prolonged acts of violence and vandalism against the country.

Not only can the use of humor be helpful for the activists involved in the midst of a heated struggle by allowing them to laugh, it can also be effective in winning the support of those on the fence and sympathy from the media. As CNN’s Ben Wedeman tweeted a few days ago:

The chants, posters, songs, dances, poems, jokes coming out of #Tahrir prove #Egypt’s most potent weapon is its wicked sense of humor #Jan25

Please feel free to share any other examples of the use of humor by protesters in Egypt that you’ve come across in the comment section.

Humor as a nonviolent weapon in Egypt