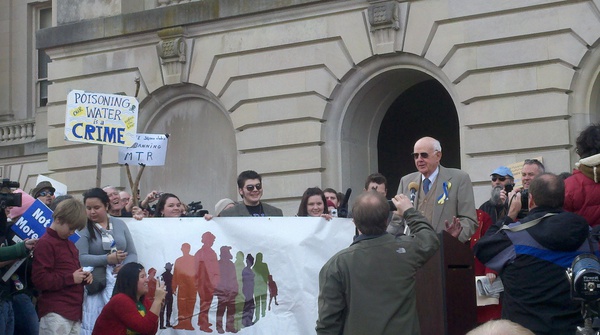 Anti-mountaintop removal activists in Kentucky spent Valentine’s Day showing their love for the Appalachian mountains. In fact, they went as far as to rename the holiday “I Love Mountains Day.”

Over 1,200 people descended on the Kentucky capitol in Frankfort yesterday morning for a march and rally to call for an end to this highly destructive form of mining and demand a transition to clean energy. At the same time, a group of affected coalfield residents, retired coal miners and bestselling authors (including the great Wendell Berry) ended a four day sit-in at the office of Kentucky governor Steve Beshear—an ardent defender of MTR.

According to the organizers of what’s been dubbed Kentucky Rising, the fourteen protesters emerged “victorious” before an excited crowd on the steps of the state Capitol.

The protesters… had been staying in the office since talks between them and Gov. Beshear came to a stalemate on Friday afternoon, when he finally agreed to meet with them after initially refusing to do so that morning. In the meeting, Gov. Beshear continued to express his steadfast support for both mountaintop removal and the coal industry.

The citizens found his position unacceptable, and refused to vacate his office. When they declined to leave, the governor instructed his security team to inform the protesters that they were welcome to stay “as long as they wanted.”

They held out until yesterday, when Beshear pledged to travel to eastern Kentucky within thirty days and personally inspect the damage caused by mountaintop removal. While this is certainly a concession worthy of celebration, it appears to have fallen short of the activists’ initial vow “to remain in his office until the governor agrees to stop the poisoning of Kentucky’s land, water, and people by mountaintop removal; or until he chooses to have the citizens physically removed.”

Wendell Berry noted this shortcoming in his address to the crowd on the Capitol steps.

We do not look upon these events as finished. We do not think of what we have done as in any sense a symbolic gesture. We’re humbled instead by the realization that our efforts cannot be carried to success by us or by any other few of us. If the adventure of the last couple days by this small company of friends is to be more than a symbolic gesture that can be only because all of you who are here, and many of our friends who are not here, will take it up, make it your adventure and your cause until this great house will become the true home of justice to all the people of this state and of faithful care for the divine gifts of land and water and of life itself.

Berry is correct to note that it will take more than the fourteen people who sat in Beshear’s office to save the mountains of Kentucky. And there’s good reason to think that that work will be taken up by the many supporters outside the Capitol building and beyond. But those people will have to at some point do what the fourteen did not: show unwavering resistance.

It is no coincidence, as Jeff Biggers pointed out, that this sit-in took place “only days since the anniversary of the historic Greensboro sit-ins in North Carolina, which triggered the Civil Rights Movement in 1960.” The organizers of Kentucky Rising are hoping their event sparks a similar type movement. If that has any chance of happening, the next step is to ensure that Beshear follows through on his pledge to tour eastern Kentucky within 30 days. Should he not, the activists know what they must do: more civil disobedience, the larger and more persistent the better.

As author Terry Tempest Williams, who lent her support to Kentucky Rising, explained, “Mountaintop removal is an act of aggression. Civil disobedience is an act of love.”

A look at the newest additions to the nonviolence canon

How international travel is changing the narrative on violence in Chicago