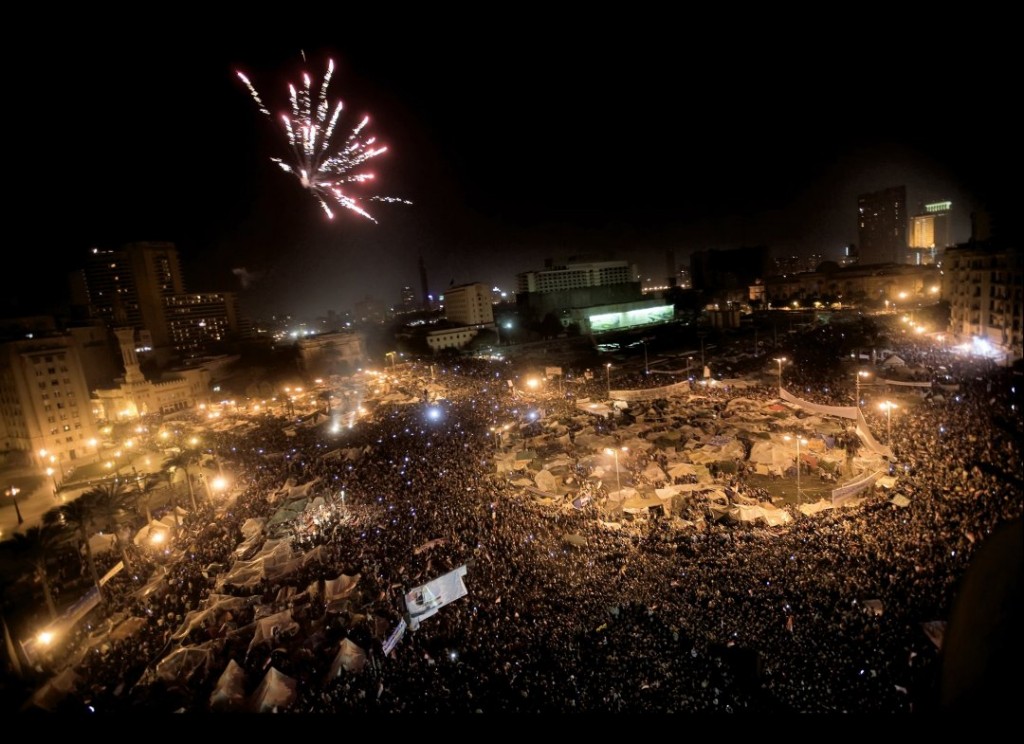 We are presenting their responses as a series over the next few days. Here is the first installment.

What first came into your mind when you saw the announcement that Mubarak had stepped down?

“I was thrilled when I heard that the dictator Mubarak had left Egypt this morning, and said to myself ‘Thank God!’ I truly believe this was the work of the God of peace and justice, moving among the people, leading them to nonviolent social change for justice and peace. From Moses to Martin Luther King, Jr. and the millions of nonviolent movements in between, the God of peace is trying to wake us up, empower us through active nonviolence, and push us to confront tyranny, dictatorship, and empire and welcome the gift of nonviolent democracy. I’m grateful to the hundreds who gave their lives and the thousands who suffered for this breakthrough. And I hope and pray that Egypt does not start a new military dictatorship, that Vice President Suleiman, director of all Egyptian torture practices will step down, that all political prisoners will be freed, that the billions Mubarak stole will be put back into the economy to feed, house and heal the poor, that the border to Gaza will be opened freely, that free elections and free media will happen soon, and that all U.S. military aid will be turned down. More, I hope and pray that the people of the world will catch the spirit of nonviolent revolution that was present in those crowds in Tahrir Square, and do what they can to end tyranny, injustice, dictatorship, torture and empire everywhere. Thank you, people of Egypt, for your courage and daring nonviolent resistance. You give us all hope.” – John Dear, author of “Living Peace” and “A Persistent Peace”

“That the new wave of nonviolent revolutions which may liberate millions and inspire tens of millions may be underway. The situation currently evolving in Egypt may very well be the most significant geopolitical event since September 11th, as within less than 2 months almost 100 million people from Tunisia and Egypt have won their opportunity to expand their freedom and build democracy. This may well result in a huge wave of nonviolent social change on the scale of which it occurred in the 1980s in Eastern Europe.” – Srdja Popovic, Founder, Centre for Applied Nonviolent Action and Strategies (CANVAS).

“In 2011, Egyptian activists arose, mightily, setting an example for the world to celebrate in their ground breaking campaign to topple the dictator, Hosni Mubarak.  Crucial comparisons must be made between the United States/NATO campaigns that ostensibly aim at delivering democracy to Iraq and Afghanistan and the means used by overwhelmingly nonviolent Egyptian activists.  Egypt’s public squares were filled by people who faced a menacing dictatorship backed up by The United States arsenals and the demands of Israel as a so-called ally.  Using multiple nonviolent means to swell their numbers, the Egyptian activists and, eventually, throngs of people brought the police state to a halt.  In contrast, invasions of Iraq and Afghanistan, to name but two of the countries to which the U.S. was determined to bring democracy, have cost hundreds of thousands of lives.  Savage U.S. attacks have destroyed neighborhoods, infrastructure, lives and livelihoods, all in the name of spreading U.S. democratic values.  The Egyptian activists who poured zeal, intelligence and careful organizing into their campaigns for a truly democratic future are rooted in ideals that are, today,emblematic of dazzling realism.  Let us savor solidarity with humility and hope.” – Kathy Kelly, Co-coordinator, Voices for Creative Nonviolence

“I was surprised.  After his statement of utter intransigence the night before I was expecting more of the same.” – Mary Joyce, Founder and Executive Director, Meta-Activism Project

“Before joining the celebration about the overthrow of Mubarak, the United States government needs to apologize to the people of Egypt for its 30 years of propping up this vile dictator with tens of billions of dollars. The U.S. did it shamelessly, well aware of Mubarak’s violence to dissenters and well aware, too, that he took our money and then used it buy weapons from U.S. military contractors.

For 30 years, one administration after another—Reagan, Bush 1, Clinton, Bush 2, Obama–were major accomplices to the crimes Mubarak was committing against the Egyptian people. For Obama to join the applause for the Cairo protestors—and no doubt Clinton and the Bushes will also be clapping their bloodstained hands—suggests that he is intellectually numb to the nasty realities of U.S. foreign policies. This should be a time when his administration would come clean and tell us what companies were profiting in arms sales to Mubarak, as well as make public all the types of oppression Mubarak visited upon his people while we kept sending him money to do it.” – Colman McCarthy, Director, Center for Teaching Peace

“It is remarkable how the world is joining in this celebration of a victory of nonviolent struggle. I am now in the midst of a lecture tour on Gandhi around New Zealand, and when Mubarak announced that he is leaving, there was an immediate reaction of joy in Wellington, especiallly, of course, among the strong contingent of peace activists here. When was the last time that people around the globe expressed such jubilation over a political event? It is a classic case of the relevance of nonviolent power. I am in awe of the determination and courage of the protesters and want to add to those of millions,  my earnest best wishes for their continuing success. They deserve the democracy that may finally be born in Egypt precisely because they have adhered to nonviolent action.” – Dennis Dalton, Professor Emeritus, Barnard College

“I was not surprised (but very pleased!). It was very clear from the first day that the movement in Egypt had planned their actions carefully and had been effective in conveying the need for both sustained pressure on the regime and strict nonviolent discipline. Despite media portrayals to the contrary, the uprising in Egypt was not spontaneous and by and large, the movement was better at strategy, discipline, adaptation, and reading the opponent than the regime. The most telling moment was how, after the first big round of repression, the resistance got even more galvanized and determined.” – Cynthia Boaz, Assistant Professor, Sonoma State University

“I thought of the tears of my friend Dr. Emad Siyam, who has been sitting in Tahrir Square since the 25th. He has been in jail 18 times, by this regime and the previous one too.” – Mohammed Abu-Nimer, Director of the Peacebuilding and Development Institute, American University

“We are poised on the cusp of a new wave of active nonviolence to effect positive social change in the world. We should expect and facilitate the energy growing out of Tunisia and Egypt to echo around the world, not only in the conventionally viewed emergent democracies but in the purportedly long standing democracies which are only more nefarious in the ways they disguise the continuing violence and costs of militarism, materialism, and racism. As 1,400 of us from 42 different nations celebrated New Year’s Eve in Tahrir Square in January of 2010 at the conclusion of that iteration of the Gaza Freedom March knew after eight days in Eqypt, this pot was on the stove and the feast was stewing. May the banquet of nonviolence continuing to nourish the world.” – Mark C. Johnson, Executive Director, Fellowship of Reconciliaton

Thailand on the brink