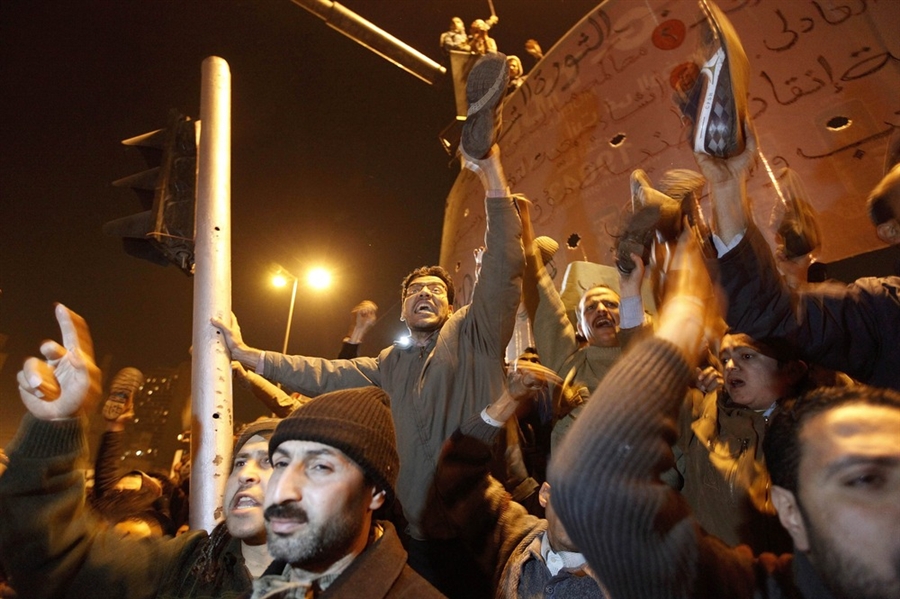 As the protests in Egypt enter their eighteenth day, President Mubarak’s comments on Thursday clearly indicate his resolve to not leave his post until elections in September.  Egypt erupted in an anger reminiscent of the “day of rage” that marked the galvanizing of this anti-Mubarak resistance into a pro-democracy movement with considerable power to dislodge the current regime.  This is crucial stage, a turning point, in the movement. Mubarak’s steadfastness – stubbornness, rather – should not be surprising.  As a dictator who enjoyed 30 years of relatively unchallenged rule through a ruthless apparatus of state violence and repression against his people, the pro-democracy movement should indeed recoil in anger but not allow itself to be subsumed by it.  The distinctly Islamic symbol of taking off one’s shoes (which are ritually considered unclean) in protest of egregious wrongs is sweeping through Tahrir square tonight in response to Mubarak’s comments.

With the unions joining the protest, boycotts affecting the tourism income, and a general strike a coalescing, the people of Egypt are a force to be reckoned.  Thursday’s announcement of Mubarak “delegating” power to recently-appointed Vice President Omar Suleiman are the last throes of an egotistical, desperate power holder seeking to save face.  The people of Egypt need to stay strong, utilize Mubarak’s anti-climatic announcement to strengthen the democratic movement by evangelizing the broader population by exposing the falsities of Mubarak and Suleiman.  The transition of power and a new government only begins once Mubarak, Suleiman, and the rest of his authoritarian cronies leave.  Use the time wisely.  Conscientize each other.  Pray with each other.  Continue to organize nonviolent trainings and create the alternative structures (meals, sanitation, security, etc.) needed to continue the occupation of Tahrir Square.  Hold meetings to clarify demands and to learn from each other about the direction of a new Egypt.

Certainly the anxieties of the Egyptian people are weighing on them in any myriad of ways.  Their bodies and spirits are stressed.  They must be wondering: “When will this end?”  “When can we go back to work?”  “Will we be attacked?”  “Are my friends and family okay?”  The nonviolent resolution or transformation of conflict requires patience and discipline.  Many popular movements, while appearing strong, have collapsed after having been waited out or overwhelmed by unexpected, violent repression.  As tomorrow might be the day of the largest protests yet, please, please do not turn to violence.  It may be painful, but not as bloody as it could be if Mubarak or Suleiman find reasons to give orders to their security forces to fight.  The Army announced today that it continues to stand behind the people, but recent reports of the Army detaining and torturing pro-democracy protesters has added to the confusion of which way the Army will through its considerable weight.  Regardless, tomorrow will be a decisive day in the future of Egypt.

How prisoners organized to elect a just DA in Philly

Church of demolished Palestinian village gets Israeli electricity for Christmas

The throwing of shoes