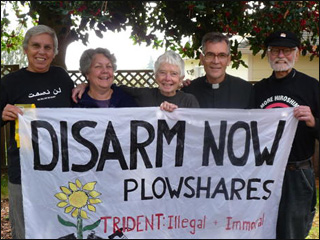 The five Disarm Now Plowshares activists who infiltrated Kitsap-Bangor Naval Base in Washington to symbolically disarm the nuclear weapons stored there received sentences yesterday ranging from six to 15 months confinement. With the action having taken place in November 2009, this decision has been a long time coming. Over the past year we’ve covered many of the major developments, from a hilarious video produced by the Seattle Times that satirized the military’s decision to prosecute 80-year-old peace activists to the more serious trial itself. But now the judge has rendered his final ruling.

According to a press release sent out yesterday:

About two hundred fifty people gathered at the courthouse to support the Plowshares activists with their presence, song, and prayer.  After the trial, they sang peace songs and processed out as a group, celebrating the beacon of hope the five activists have been for their community.Roman Catholic Bishop Thomas Gumbleton, former U.S. Attorney General Ramsey Clark, and others testified on behalf of the defendants.  Bishop Gumbleton, retired bishop of Detroit and founding president of the peace group Pax Christi, testified that the Catholic Church has spoken out very strongly against nuclear weapons, saying that no use of nuclear weapons can be justified morally.  “We must abolish these weapons before the earth is destroyed.” Ramsey Clark, U.S. Attorney General under President Lyndon B. Johnson, testified that never in his life has he encountered such unselfish people as those who participate in the Plowshares tradition of direct action against nuclear weapons.  Regarding their decision to live a life of civil resistance, he said, “Their consciences tell them they have to do it.  God will bless them for it and the courts of the United States should too.”

Speaking as part of the Disarm Now Plowshares legal team, Anabel Dwyer and Bill Quigley laid out the broader legal picture of the case. “The problem is that nuclear weapons and the rule of law can’t exist side by side,” Dwyer said.  “The other problem is, we cannot disarm nuclear weapons unless through the rule of law.  We are in a conundrum here.” Quigley submitted that lawyers are obligated to “understand difference between law and justice and to narrow that gap.”  He encouraged the judge to look back one hundred years and consider how many of the laws of that time were “legal but manifestly unjust.”  Dwyer is a Michigan attorney and Board Member of The Lawyers’ Committee on Nuclear Policy (LCNP), and an expert in humanitarian law and nuclear weapons.  Quigley is the Legal Director for the Center for Constitutional Rights in New York and Professor at Loyola New Orleans.

Each of the five co-defendants, Bill “Bix” Bichsel, SJ, Susan Crane, Lynne Greenwald, Steve Kelly, SJ, and Anne Montgomery, RSCJ, read statements in court.  They focused on the personal responsibility they feel to disarm nuclear weapons, and their desire to prevent pain, suffering, and death for “those deprived by our wars and military budget of a human way of life.”

Character witnesses spoke to the defendants’ solidarity with Native people, children, working people, and the wider Tacoma community.  Rosella Apel, age 11, said in her character witness for Steve Kelly, “I have a clear image that when I grow up I’m going to do the exact same thing that these five have.”

While this may be the end of the legal road for the Disarm Now Plowshares, it is only the beginning, as this last statement testifies, of the lasting impact their action will have on future generations and the anti-nuclear movement as a whole.

How LGBTQ people are resisting Bolsonaro’s Brazil through art

Obama’s Keystone veto is a historic, but cautious, victory

A nationwide grassroots movement led by the Gwich’in people may soon reach its long-sought goal: permanent protection of the Arctic National Wildlife Refuge.