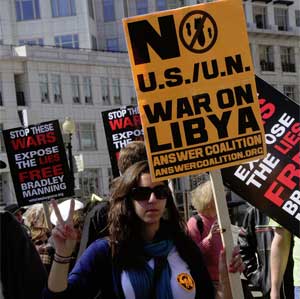 Should we or should we not support war on Libya? This question is being seriously posed by many on the left and in the progressive world, and I’ve honestly been quite surprised by who has gotten behind the use of military force.

At the end of one particularly nasty piece, after telling a story about how terrible Qaddafi is, Juan Cole, whose analysis I often like, wrote: “Payback is a bitch.” Even Phil Weiss of Mondoweiss has written of his mixed feelings on the attack.

How people who are so knowledgeable about US foreign policy can buy in to the humanitarian argument for war is beyond me. It should be abundantly clear to anyone who really pays attention that the US doesn’t ever intervene out of concern over civilians or because of our desire to uphold democracy, human rights and freedom. These nice ideals are used only to sell war to the public.

If they were our highest concern, how can you explain US support throughout history of dictators in too many countries to mention and our often successful attempts to overthrow democratically elected governments that challenged “US interests”?

How do you make sense of our military, economic and diplomatic support of the dictatorial or autocratic regimes in Tunisia, Egypt, Saudi Arabia, Yemen, Bahrain and many other countries in the region, even as their people rise up and are shot down for democracy, human rights and freedom?

The historical record is clear: in almost every case the US intervenes in other countries to protect its perceived economic or geostrategic interests. The same is undoubtedly true in Libya, which sits atop the largest oil reserves on the African continent and has largely been a hold out against neoliberalism.

On top of this question of motive, in an op-ed in the Guardian, editor-in chief of the London-based pan-Arab newspaper Al-Quds Al-Arabi Abdel al-Bari Atwan offers several other pragmatic critiques of military intervention.

To summarize, he writes that in some ways it’s likely to play into Qaddafi’s hands, that the no-fly zones didn’t work in ending Saddam’s reign in Iraq, and that:

Finally, there is the worry that the Arab spring will be derailed by events in Libya. If uprising plus violent suppression equals western intervention, the long-suffering Arab subjects of the region’s remaining autocrats might be coerced into sticking with the status quo.

In another solid piece in the Guardian, Symon Hill argues that nonviolent alternatives have not been exhausted:

Now, as then, those who raise questions are told: “We can’t just do nothing.” This is the old warmongers’ trick of pretending that there are only ever two options – violence or passivity. But pacifism is not passive. To be a pacifist is to take a stand against the dominant values of our society, and this cannot be done passively.

There is nothing more naive than believing that violence will always work. Of course, some nonviolent movements have been more effective than others. But the many successful uses of nonviolence are often forgotten, while war is applauded and written about in history books. Advocates of war rarely speak of the repeated failure of violence to achieve its aims even in the short term, let alone the long term.

As the German foreign minister, Guido Westerwelle, argued: “The alternative to military options is hardly inaction.” Suggestions for alternatives include financial assistance and intelligence-sharing with anti-Gaddafi movements, working with Libya’s neighbours to prevent the flow of non-Libyan mercenaries to Gaddafi’s forces and various economic and political pressures.

And from a more principled perspective on nonviolence, I have to say that I personally just don’t believe that war is ever the answer. It doesn’t matter whether the Arab League is supportive or whether a majority of the Libyan people are calling for foreign military intervention. Just because someone supports violence or asks for you to kill doesn’t make it right. Killing is wrong. It is immoral.

As a Christian, I believe that not only are we not supposed to kill, but we are called to love our enemies and do good to those that harm us. And while love of enemy can take many forms, I’m pretty sure that means we can’t bomb them. This of course is dangerous and difficult and could get one killed. But Jesus not only preached this, he lived it. By giving his own life on the cross and forgiving those who killed him, rather than taking up the sword to defend himself, Jesus was really the perfect embodiment of nonviolence.

How #NoDAPL united a movement for Indigenous rights

In Bolivia, being a journalist and organizer go together

Why war on Libya is wrong