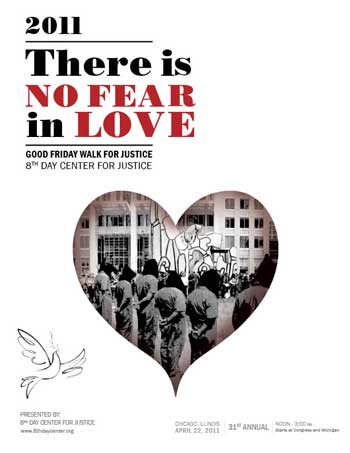 As Lent ends and the Holy Triduum begins, my mind turns to Resurrection. Perhaps a bit too soon as the Good Friday death of Jesus and his descent into darkness is still impending. But I can’t help myself. I cling to the hope of Resurrection even as I know the death-plunge is imminent – in fact, we live in its midst – in Japan, Afghanistan, the barren deserts of the U.S.-Mexico border, predominantly neighborhoods of color in my own Chicago. Each year, thanks to the good people at the 8th Day Center for Justice – a splendid, faith-based organization committed to social and environmental justice in our city, nation and world – we gather in the heart of our Sweet Home for the Good Friday Walk for Justice. Modeled after the traditional stations of the cross, community and activist organizations around Chicago present a justice issue facing the city or the wider world. In the past, I’ve participated in stations that drew prayerful attention to the war in Iraq, torture at Abu Ghraib, and the prisoners in Guantanamo.

This year, my community – the White Rose Catholic Worker – has the final station: “Occupation.” The United States is occupying Afghanistan. The stations of the cross culminate in the execution of Jesus by an occupying force. In Afghanistan, innocent children collecting firewood, communities gathered for wedding celebrations, and families headed out for a picnic are executed by drone bombings, night raids, and kill teams. I recently returned from Afghanistan where I met with many young Afghan peacemakers who, in spite of all the risks and threats, are deeply committed to a vision of nonviolence and justice for their communities and country. As a Christian, I am heartbroken that the gift of Christ’s peace that we are given to share is a rare privilege for the wealthy Christians who have grown silent and complicit in the face of injustice. The church, at least in the West, is a far cry from the community of early disciples who, because of their faith, resisted empire by sharing what they had with the poor, promoting a vision – the kin-dom of God – of society without division, and loved each other to the point of death, even death on a cross. In Afghanistan, an overwhelmingly Muslim country, I met young people who experience the reality of Jesus – a peacemaker who loved the poor, shared good news, and was executed by empire because of it.

But as Fr. Dan Berrigan, SJ, reminds us in his short but powerful essay, “The First Nonviolent Revolution,” we have much to rejoice about. “The first nonviolent revolution,” writes Berrigan, “was, of course, the Resurrection. The event had to include death as its first act. And also the command to Peter, ‘Put up your sword.’ So that it might be clear, once and for all, that Christians suffer death rather than inflict it.” If only that was the posture of the United States toward its enemies. Because in that posture, where fear has been overcome and violence defeated, space is created in our lives for us to become the Easter people we are destined to be by the nonviolence of the Resurrection.

Nonviolence for an Easter People