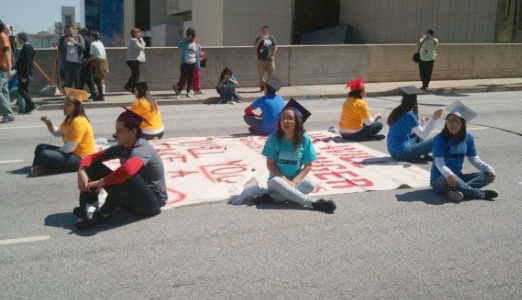 The immigrant rights movement is getting extreme.  In the past two years, in addition to some of the largest mass gatherings in the country, undocumented students and their allies have shifted their protest from street marches to civil disobedience.  There has been a preponderance of undocumented students “coming out,” announcing that they are “undocumented and unafraid.”  Some have taken an even greater risk by engaging in acts of civil resistance – a witness that can lead to harassment and deportation.  Last week, as Waging Nonviolence reported, seven undocumented students were arrested in Atlanta, Georgia protesting proposed legislation that would ban undocumented students from public universities in Georgia.

The Georgia protest follows in the footsteps of other undocumented students across the nation who have risked not just arrest and jail time for their speaking out for comprehensive immigration reform – including the DREAM Act –  but also deportation.  The courageous actions of these students originated in Tucson, Arizona – one of the epicenters in the struggle for a more just and humane approach to immigration policy – when five undocumented students occupied Senator John McCain’s office in May 2010 advocating for the DREAM Act (the DREAM Act would provide a path to citizenship for qualifying students and military members; it failed to pass the Senate in December 2010).  None of the undocumented students who have been arrested for acts of civil disobedience have yet to be deported (More information on these actions can be found at TheDreamIsComing.com).

It is likely that Immigration and Customs Enforcement (ICE) does not want the bad publicity of deporting some of America’s best-educated youth of moral character – even if they do not have papers.  And that is the point of these acts of resistance and protest; by publicly declaring one’s undocumented status and allowing oneself to be publicly scrutinized, these students are debunking the anti-immigrant rhetoric head on.  It challenges the state’s hegemonic notion that “illegals” are criminals with nonviolent action by revealing the real, ordinary human person behind the ugly label of “illegal.”  The immigrant rights movement, in humanizing the conflict, supporting these brave students and by putting more bodies on the line at ICE facilities, detention centers, and federal buildings, is finding its roots in the tactics and vision of the Civil Rights Movement’s tradition of nonviolence.

In “Letter from Birmingham City Jail,” Dr. King responded eloquently to his detractors – white “liberal” clergyman – to explain and justify the necessity of direct action as a means of struggle for just ends.  The movement, having grown tired of waiting for negotiations to give way to meaningful change, believed that “justice delayed was justice denied.”  By escalating its tactics to that of direct action, the movement hoped to put pressure on the power holders to come to the negotiating table willing to cede to the demands.  Direct action, then, for King and the movement was a responsible choice which they did not make lightly and prepared intensely for:

In any nonviolent campaign there are four basic steps: collection of the facts to determine whether injustices exist; negotiation; self purification; and direct action. We have gone through all these steps in Birmingham. There can be no gainsaying the fact that racial injustice engulfs this community. Birmingham is probably the most thoroughly segregated city in the United States. Its ugly record of brutality is widely known. Negroes have experienced grossly unjust treatment in the courts. There have been more unsolved bombings of Negro homes and churches in Birmingham than in any other city in the nation. These are the hard, brutal facts of the case. On the basis of these conditions, Negro leaders sought to negotiate with the city fathers. But the latter consistently refused to engage in good faith negotiation.

[…]
We had no alternative except to prepare for direct action, whereby we would present our very bodies as a means of laying our case before the conscience of the local and the national community. Mindful of the difficulties involved, we decided to undertake a process of self purification. We began a series of workshops on nonviolence, and we repeatedly asked ourselves: “Are you able to accept blows without retaliating?” “Are you able to endure the ordeal of jail?”

You may well ask: “Why direct action? Why sit ins, marches and so forth? Isn’t negotiation a better path?” You are quite right in calling for negotiation. Indeed, this is the very purpose of direct action. Nonviolent direct action seeks to create such a crisis and foster such a tension that a community which has constantly refused to negotiate is forced to confront the issue. It seeks so to dramatize the issue that it can no longer be ignored. My citing the creation of tension as part of the work of the nonviolent resister may sound rather shocking. But I must confess that I am not afraid of the word “tension.” I have earnestly opposed violent tension, but there is a type of constructive, nonviolent tension which is necessary for growth.

With the failure of the DREAM Act and the rise of anti-immigrant legislation like Arizona’s SB 1070 law, immigrant rights activists have coalesced into a tighter-visioned, more broadly-based nonviolent social movement that seeks to create the necessary tension to deal with the systemic problems of state and federal immigration policy. Like the Civil Rights Movement, whose student- involvement origins are popularly traced to the 1960 Greensboro lunch counter sit-ins, these small, but committed (and connected) actions for immigrant rights are just the harbingers of a larger movement that is to come.

In fact, CORE-organized (Congress of Racial Equality) student protests and sit-ins were happening as early as 1942 in Chicago.  Direct action was successfully utilized to desegregate Baltimore department stores through 1952 and 1955.  The Greensboro sit-ins started out as relatively small, local action but it served as a spark to mobilize a grassroots network of students into a larger movement engaged in more direct action.

Today, the actions of undocumented youth are commensurate to the actions of the young black students and white allies.  When King wrote in his 1936 letter, and appropriately so for the undocumented youth protests in Atlanta, of the interconnectedness of the struggles for justice, famously saying “injustice anywhere is a threat to justice everywhere,” he contributed to the canon of nonviolence a vision of solidarity that goes beyond citizenship:

I am cognizant of the interrelatedness of all communities and states. I cannot sit idly by in Atlanta and not be concerned about what happens in Birmingham. Injustice anywhere is a threat to justice everywhere. We are caught in an inescapable network of mutuality, tied in a single garment of destiny. Whatever affects one directly, affects all indirectly. Never again can we afford to live with the narrow, provincial “outside agitator” idea. Anyone who lives inside the United States can never be considered an outsider anywhere within its bounds.

When ordinary citizens are willing to risk jail (and being deported in the case of the undocumented, which would not allow them to return to their entire lives and identities: family, friends, studies, or careers), the strength and hope of nonviolent action coalesces into a movement.  Until meaningful immigration reform occurs that puts people and families at the center, the kind of movement built on nonviolent direct action that has been relegated to historical reminiscence will creep its way into the headlines and consciousness of the nation.  Sure, some may consider direct action, civil disobedience, and risking deportation, to be too extreme for individuals or civil society, but such questioning does not serve the cause of justice.  “So the question is not whether we will be extremists” as Dr. King put it to his fellow questioning clergymen, “but what kind of extremist will we be.  Will we be extremists for hate or will we be extremists for love?  Will we be extremists for the preservation of injustice – or will we be extremists for the cause of justice?”