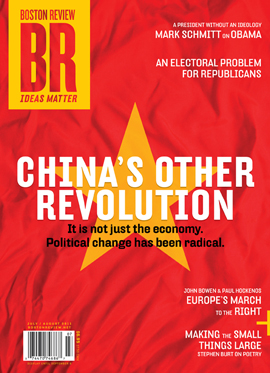 Unfolding this month at the Boston Review is “China’s Other Revolution”—an essay by MIT political scientist Edward S. Steinfeld and a series of responses, all on the subject of whether and when real democratic reform will happen, or is already happening, in authoritarian, oligarchic China.

Steinfeld is mostly dismissive of the ongoing “Jasmine Revolution,” which Ayushman Jamwal writes about today at Waging Nonviolence, claiming (incorrectly in past tense) that it “drew small crowds and little energy.” Nevertheless, he urges us not to interpret the recent spate of crackdowns and arrests by the government—including the arrest and subsequent release of the artist Ai Weiwei—as indicative that the regime’s hold on power is especially strong. On the contrary:

Those who doubt that profound change and harsh repression can coexist in China should look to the history of South Korea and Taiwan. In January 1987, just seven years after a democratic uprising was crushed in the South Korean city of Gwangju and a few months before the military-backed regime would yield to popular demands for open elections, student protestors were being summarily rounded up by the police. At least one of the students died during interrogation. That same year Taiwan’s Kuomintang government announced the end of 38 years of martial law, a key step toward the establishment of democracy there. But in the months before the announcement, dissenters were still being shipped off, often by secretive military tribunals, to the notorious gulag on Green Island. Crackdowns on opponents, extrajudicial detentions, and violence are often the last-ditch efforts of authoritarian regimes.

He goes on to detail the ways in which China’s many economic and educational reforms are pointing toward inevitable political change in the next generation or so, which is already be in the works.

The responses to Steinfeld’s essay are not so optimistic. Andrew Walder, a sociologist at Stanford, emphasizes the differences between China’s political structure and that of the other cases. What we’re dealing with here, he says, is a distinctive Soviet-style system with tendrils in all areas of public life, and which won’t take easily to gradual, liberalizing reforms.

This is not a garden-variety personal or military dictatorship. There are only four other regimes structured like China’s, in Vietnam, Laos, North Korea, and Cuba. China’s network of Communist Party organizations, its conservative leadership in a national politburo, the preeminence of Party organizations over all government institutions, its subservient legal system, and its massive and growing security apparatus are all familiar to those who recall communist systems of 30 years ago. The recent crackdown is a symptom of the survival, indeed the revitalization, of a Soviet model of governance. The continuing strength of that model is not altered by revolutionary changes in the economy or by the staffing of government institutions by younger, better educated, and more worldly administrators. China’s economy and society may remind us of South Korea’s and Taiwan’s in an earlier era, but the core political institutions, and in recent years the political attitudes of the leaders, are more reminiscent of the Soviet Union during the late Brezhnev era. This makes China a deeply paradoxical polity, presenting its leaders with a real dilemma.

Baogang He, of Deakin University in Australia, is no more hopeful. While he discusses aspects of political reform on the local level—including citizens’ “forums”—he emphasizes that the current wave of repression is strategic; its purpose is to ensure a smooth transition of power in 2012. Again, he finds it hard to see how a political system like that in China can move toward liberalization when the system itself is structured in such a way so as to err on the side of repression.

Internal debate concerning political reforms has continued amid the repression, but to little effect. Premier Wen Jiabao has made public statements in favor of reforms, and Yu Keping, a pro-reform scholar and official, has floated the concept of co-governance, which involves both government and civil society. But these discussions gain little traction outside the confines of the Party; even the phrase “civil society” has been banned by propaganda officials, making it clear that the concerns of the security apparatus trump reformist ideas.

Professor He concludes by pointing out that China’s politics is not just a concern for Chinese, but for the whole world.

The way in which the Chinese government treats its own people provides an indication of how it will behave internationally as China’s power grows and international constraints on its exercise decrease.

One need only think of countries like Burma, Sudan, Zimbabwe, and North Korea, whose egregious human-rights abuses are aided and abetted by Chinese support in various forms. But then one can also think of the United States, where the elephant in the room amidst the current Congressional posturing on the national debt is China, which owns enough of that debt to be, perhaps, the real decider.

What all the Boston Review contributors have in common, however, is a disregard for the prospects of grassroots, broad-based resistance. They write off the Jasmine Revolution as a failure—again, even while noting the widespread repression it has forced the regime to enact. They toss off figures about the tens of thousands of mass protests in China each year (or, by some accounts, hundreds of thousands), but they don’t say enough about the efforts of young Chinese like Gaius Gracchus—whom Ayushman Jamwal’s essay profiles—who are working to draw together this unrest around the country into a cohesive movement.

These scholars, who focus their attention on business and political elites, are inevitably going to be blind to the real source from which real change will have to come, in China or anywhere: from below, from ordinary people.

Why I went to Guantánamo, again

Is a revolution in China around the corner?