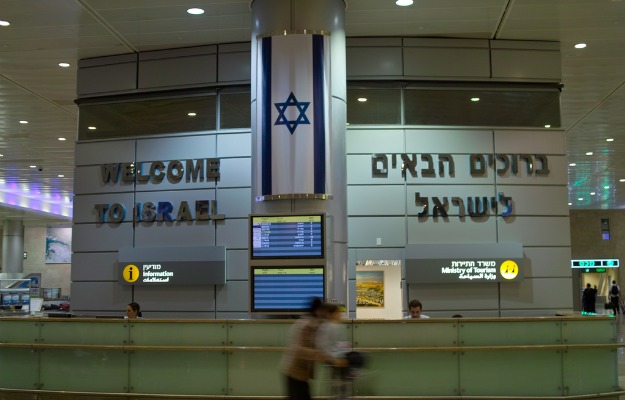 While Greece continues to block ships taking part in the Freedom Flotilla to the Gaza Strip, hundreds of pro-Palestinian activists are planning another way of entry into the territories—this time, by air. More than 300 foreign nationals on 50 flights will attempt to arrive at Ben-Gurion ariport in Tel Aviv on Friday and ask to enter the West Bank. The initiative, which is called “Welcome to Palestine,” seeks to confront an Israeli policy that forbids visitors coming in solidarity with the Palestinians. Already dubbed the “air flotilla” or “flytilla” by local media, this action will not be an easy one to pull off.

According to Haaretz, “Around 600 police officers will deploy at Ben-Gurion International Airport to stop the hundreds if not thousands of pro-Palestinian activists arriving on flights today.” The police will likely be undercover and not wearing anti-riot gear or carrying weapons—as a measure to prevent the kind of negative publicity received from last year’s storming of the Mavi Marmara.

Israel is also pressuring airlines to turn over their passenger lists, which will make it easier to stop anyone who has been previously screened by Israeli forces from boarding any planes. According to Haaretz, the names of 300 activists have already been identified by police.

As a French activist involved in the campaign explained in an email that was passed along to me:

Israelis have sent a list of several hundred names of passengers to all the airlines of the world asking to prevent them from boarding so that they cannot reach the West Bank. Some of these airlines have called a few of our participants to try to convince them not to leave.

We are calling all participants to the mission—their friends, families and supporters—to go to all the departing airports tomorrow morning where Israel is trying to intimidate the airlines and push them to violate the rights of their passengers. We must demand to board these planes and demand that our rights be respected. None of you must go missing tomorrow. The mobilization must be so general that more people and more journalists be present.

Any activists that are able to get on planes bound for Tel Aviv will likely be detained upon arrival before being sent home. So, there is almost no chance of anyone reaching the West Bank. But that’s not point. The point is to further expose how life in the territories is seperate and not equal. This is a dilemma for State of Israel. The more it continues to clamp down on people who simply want to support the human rights of the Palestinians, the more the activists are able to prove the direness of the situation.

With the crisis of Kavanaugh’s confirmation comes opportunity

Coming out as an activist