For those of you with access to HBO, there are two really solid labor documentaries available on demand this month. Coincidentally, both take place in New York, but in very different times.

Triangle: Remembering the Fire commemorates the 100th anniversary of the Triangle Shirtwaist Factory Fire in which 146 garment workers in New York City were killed. The film features some moving interviews with descendants of the victims, as well as the grand-daughter of the factory owner—who is torn between loving her grandfather and feeling shame.

Despite the passing of several generations, the tragedy seems almost contemporary. And how could it not? On the one hand, as the film points out, the fire’s aftermath exposed horrific labor practices that led to the decent labor practices we thankfully enjoy in America today. On the other hand, horrific labor practices still exist in developing countries where America buys the majority of its goods. As one historian noted, “You want to know what a world without regulation looks like? Look at the Triangle fire.” 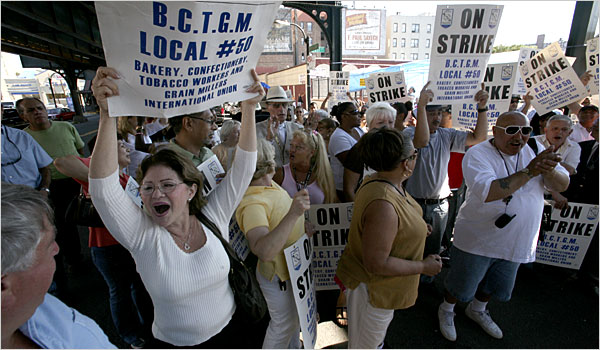 No Contract, No Cookies: The Stella D’oro Strike tells the story of Bronx factory workers who went on strike for 11 months to protest unfair wages imposed by the private equity company that bought the once family-owned business in 2008. Emmy Award winning filmmakers Jon Alpert and Matthew O’Neill offer a sympathetic, yet honest, look at how life has changed for a group of first-generation Americans, who gave their all to a company that ultimately turned its back on them.

It almost doesn’t matter how the strike ended (and I won’t say, in case you haven’t heard). The real outcome is the sense of unity and community that grew out of the struggle. In short, it’s a story about the intangibles of working together for a cause.

Labor action in New York, past and present