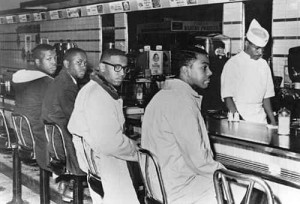 On this date in 1960, the Woolworth’s store in Greensboro, North Carolina that had been the site of the famous lunch-counter sit-ins just months earlier dropped its segregation policy. It’s as clear a testament as any of the power social movements possess when they engage in planning and maintain strict nonviolent discipline, as well as unity.

Recently, however, the Greensboro sit-ins have been used to highlight another point in an emerging debate as to the driving force in social-movement building. Author Malcolm Gladwell says it’s strong ties forged through personal connections—not the weak ties we form online between our friends and followers on Facebook and Twitter. Last year, writing for the New Yorker he argued:

The evangelists of social media don’t understand this distinction; they seem to believe that a Facebook friend is the same as a real friend and that signing up for a donor registry in Silicon Valley today is activism in the same sense as sitting at a segregated lunch counter in Greensboro in 1960… Facebook activism succeeds not by motivating people to make a real sacrifice but by motivating them to do the things that people do when they are not motivated enough to make a real sacrifice. We are a long way from the lunch counters of Greensboro.

These words sparked a lot of backlash—not the least of which was to simply point out the difference between social media evangelists and social media advocates. The latter recognize that social media aren’t perfect. But they have serious potential and they aren’t going to disappear anytime soon. So why not figure out how we can best use them. Perhaps there are ways in which they can actually inspire the type of action that leads to a sit-in.

Chris Taylor of the popular tech news blog Mashable thinks so. In a piece for CNN.com last week, Taylor wrote about several recent cases where social media rallied people to do more than just click a button in support of a cause.

Exhibit A in this argument, as you might expect, is the Middle East, circa spring 2011. But I’m not just talking about the Facebook-based protests that toppled governments or the social media campaign organized by brave women posting YouTube videos of themselves defying Saudi Arabia’s ban on female drivers.

There’s a more prosaic but no less illustrative example in Israel, where the three main dairies all decided to increase the price of cottage cheese by 75% last month.

That seemed like just another grumble-inducing rise in the cost of living until 25-year-old Itzik Alrov started a Facebook campaign calling on his fellow Israelis to let cottage cheese “stay in the stores and spoil until the price comes down.”

The group gained 105,000 adherents by month’s end. (Not bad for a nation of 7 million.) Suddenly, opposition MPs were dumping tubs of the stuff on the prime minister’s desk, and the finance minister was talking about importing cheaper foreign cheese.

The dairy companies promptly cut their prices. Here’s a tellingly bemused quote from one of their CEOs: “Something happened here, and it changed the rules of the game.”

It’s also happening in the US—although, admittedly, not quite as dramatically.

This month a woman in a Detroit suburb faced the prospect of 93 days in jail for growing vegetables in her front yard, in apparent violation of a local ordinance. Then a Facebook page supporting her went viral, thousands of strangers from across the U.S. signed her petition, and the town planners dropped the charges.

This last example reminds me of the story of the stolen smart phone that Gladwell chides in his New Yorker piece. The phone was recovered by its owner after he created a viral campaign that basically shamed the police into arresting the thief. To Gladwell, this story shows that “the instruments of social media are well suited to making the existing social order more efficient. They are not a natural enemy of the status quo.” And to a certain extent, he’s right. Websites run by for-profit corporations were not designed to challenge the status quo. But that doesn’t mean they don’t end up getting used that way.

In short, we’re still figuring out the limits of social media’s potential. Maybe it doesn’t create the same kind of strong personal bonds that lead to the type of personal risk-taking that desegregated lunch counters in the South. Or maybe it does and the relationships that formed in Egypt through Facebook during the lead-up to the revolution are proof of that. It’s still hard to say definitively and perhaps that’s the point. It’s not a black and white issue. In same cases, social media only encourages people to make the minimal effort for a cause that’s not exactly controversial. At the same time, there are CEOs and police departments buckling under its power.

This weekend, a one-stop-shop to militarize your town

Taking that next step: when social media turns commenters to protesters