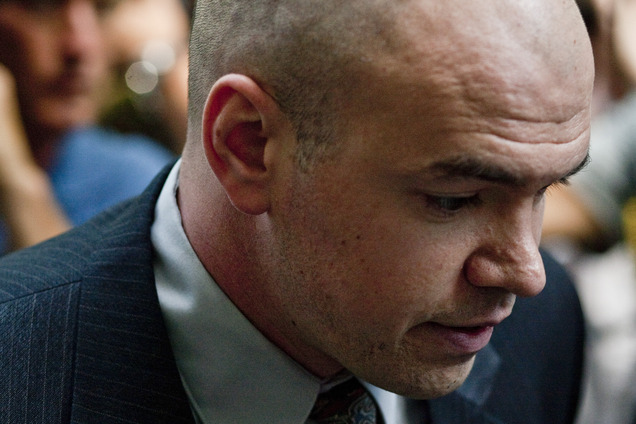 Environmental activist Tim DeChristopher was sentenced today to two years in prison and a $10,000 fine for disrupting a federal oil and gas lease auction in 2008 that was later deemed illegal. But don’t cry for him. Having met the man, I can confidently say the last thing he wants is pity.

At a speaking engagement earlier this year, someone asked Tim how we could keep him from going to prison. He quickly responded, “I’m not sure keeping me out of prison is a good thing. I’d rather think about having you join me.” After all, he didn’t do it for himself.

As Bill McKibben points out in a piece published on Huffington Post earlier today, “If you sweated through last week’s record heat, if your crops are withering in the southwest’s epic drought, if you watched the Mississippi swallow your town — then Tim DeChristopher acted for you. And it’s time for you take the same kind of responsibility.”

McKibben recommends traveling to Washington DC next month for two weeks of civil disobedience against the proposed Keystone Pipeline that will carry oil from the tar sands of Alberta down to the Gulf of Mexico.

This action won’t be as risky as Tim’s. People are signing up to come to DC for three days. On the first they’ll attend nonviolence training, and on the second they’ll sit down in front of the White House. No one knows for sure how the police will react, but the legal experts say jail time will likely be measured in hours, not years. Still, it’s a very real way to say to President Obama (who will make the Keystone decision all by himself) that this is the great moral issue of our time.

For motivation, consider what DeChristopher read before he was sentenced this afternoon:

The successes and failures of South Africa’s student movement

A conversation with the editors of “Remaking Radicalism” — a collection of writings from one of the most underrepresented periods of leftist organizing.

Unparalleled in its size and variety of actions, the last and largest national anti-Vietnam War demonstration offers lessons for challenging U.S. militarism today.

Daniel Berrigan and his fearless nonviolence, at 100

Meet Mariame Kaba, the organizer at the center of the movement for police and prison abolition

GOP seeks to shut down protests

The father of environmental justice isn’t done yet