In what’s believed to be a first for any United States government agency, San Francisco’s Bay Area Rapid Transit forestalled a planned protest on Thursday against the latest police shooting of an unarmed man by cutting cellphone service. The action has raised all sorts of questions regarding free speech and the right to assemble peaceably. As Gene Policinski, executive director of the First Amendment Center at Vanderbilt University told the Christian Science Monitor:

“I think you can on the one hand argue it was a momentary discomfort for somebody who has other means of communication,” says Professor Policinski. “On the other hand, it’s a very disquieting development. Here you have a government agency indiscriminately closing down all kinds of speech in order to prevent a perceived possibility of violence.” 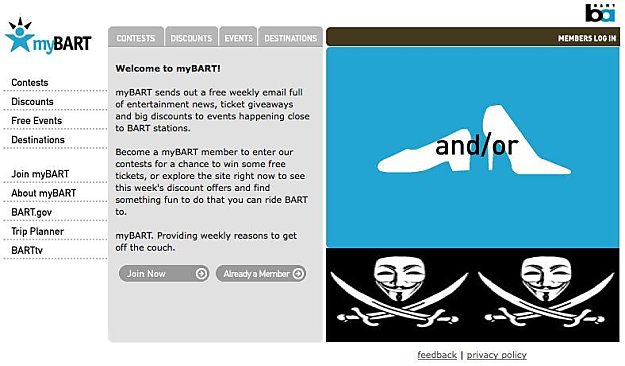 The hacktivist group Anonymous has certainly sided with the latter opinion. On Sunday they broke into a BART’s website and posted company contact information for more than 2,000 customers. The group also urged its members and followers to bombard BART with emails and faxes, as well as file complaints with the FCC. A physical protest is also being planned for later this afternoon at the Civic Center BART station.

It will be interesting to see how BART responds to all this. It claims to have shut down cell service because July protests against BART police shootings had turned violent. But doesn’t that sound like a convenient excuse to snuff out any and all protest—the majority of which are peaceful? Do Americans, as some have argued, want to see their government go down the same road as Egypt’s Hosni Mubarak or other authoritarian leaders who have attempted to squash dissent by cutting communication services?

Ultimately, though, the bigger question on activists’ minds should be how to get around this kind of suppression. While it’s important to challenge the legitimacy of such action, activists shouldn’t expect to rely on government benevolency in order to be effective. Nor can they rely on technology alone. Systems and strategies need to be developed in order to anticipate crackdowns and enact workarounds that allow for protest to go on unimpeded.