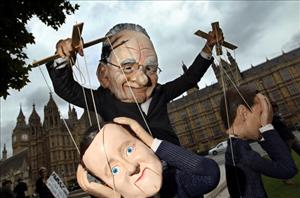 The news cycle may have started shifting away from the News Corporation hacking scandal, but social media activists aren’t about to let Rupert Murdoch off the hook. In the past few weeks, new campaigns have been emerging on the web which are raising awareness about the scandal, advocating a boycott of News Corp holdings, and monitoring its corporate practices.

Before James Murdoch announced the closure of News of the World, a campaign against the paper was launched on Twitter by Melissa Harrison (@The_Z_Factor). It encouraged Twitter users to tweet News of The World advertisers to reconsider their contracts, providing a list of tweets directed at those companies. One example is, “Dear @VirginMedia, will you be reconsidering your advertising spend with #notw given that we now know they hacked Milly Dowler’s [2002 murder victim] phone?” In an article in the Guardian, Harrison recalls that the campaign developed over time, growing from rants against News Corporation to a strategy to target advertisers as more people started exchanging tweets. British corporations like Morrisons, The Co-Operative, and Virgin Holidays pulled their advertising from News of The World before the paper was shut down. It isn’t clear yet what role Harrison’s campaign played in this.

A Facebook page titled “Boycott News International (@BoycottMurdoch on Twitter), currently has almost 9,700 members. It calls for people to boycott Murdoch properties like The Sun, The Times, The Sunday Times, and Sky television. Of course, it’s easier said than done to avoid Murdoch’s media, especially the websites associated to his papers and channels. Yet the web itself can offer some help. The Google Chrome web store now has an add-on called Murdoch Block, which blocks websites owned and operated by News Corporation. Similarly, there is a MurdochAlert add-on for Firefox, which displays a warning box whenever the browser accesses a Murdoch-controlled site: “MurdochAlert identifies the domains that may place users at risk for Murdoch-related hacking.”

Some Web activists are going the extra mile, resorting to online sabotage. The hacker group LulzSec hacked The Sun’s website on the 19th of July and set up a fake news article announcing the death of Rupert Murdoch. The article was titled “Media moguls body discovered” and elaborates that Murdoch “ingested a large quantity of palladium” before “passing out in the early hours of the morning.” The article adds, “Authorities would not comment on whether this was a planned suicide, though the general consensus among locals and unnamed sources is that this is the case.”

Britain’s netizens also launched a campaign through the online activist portal Avaaz.org against Rupert Murdoch’s bid to gain 100% ownership of BSkyB, the parent company of the Sky news channels in the UK. For years, News Corp has been criticized for undermining media plurality in the United Kingdom, and the phone hacking scandal has heightened sentiments against the bid.

Active online participation with these campaigns depends on a high level of public knowledge of the scandal. YouTube has become a repository of knowledge, where the channel NOTWPhoneHacking, has uploaded hundreds videos of news and panel shows, chronologically showing the progress of the investigation and developments in the media debates and discussions.

Thanks to campaigns like these, public and political pressure has resulted in important arrests, resignations, and the announcement by the British Trinity Mirror media group to review its editorial controls and standards. But as mainstream media focus fluctuates, the new media is playing a key role in the campaign against illegal corporate journalism, and for a reassessment of the democratic duties of the British media.

Ayushman Jamwal is a master's student in political communication at Cardiff University.

#BlockTheBoat prevents Israeli goods from docking in Oakland and Tacoma

In Hollywood, WikiLeaks is a whole lot less interesting than in real life

Britain’s new media keeps up the pressure on Murdoch