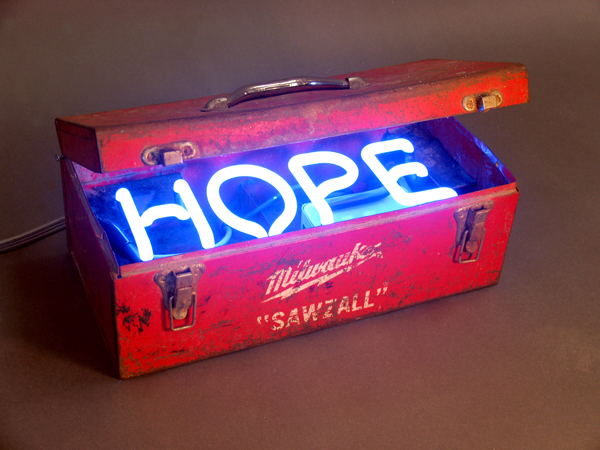 Most people remember Pandora’s box as a source of all the troubles in the world. In the original version, however, there’s an intriguing element: one thing remains in the box, for which the Greek word is elpis meaning “expectation” or “hope.” With the presidential elections of 2012 already heating up, many of us may well be asking ourselves, what happened to the high hopes that floated our spirits after the last one. In the words of Langston Hughes, “What happens to a dream deferred?”

The myth may give us a partial answer: hope is still there, but we’ve been looking in the wrong place. It’s not to be found in a politician elected to high office, for however good a person he (or she—God forbid!) may be. That person will be constrained by an extremely corrupt and even vicious system. It is hidden inside the box of human potentials where we have not been able to see it through the crowd of troubles fluttering around the lid.

In other words, there is no dearth of hope, even in this benighted world, if you know where to look for it—not a hope that things will come together by themselves, to be sure, but hope that if we put our hands to the plough, we can restore some sanity and humane direction to human endeavors. We have learned one lesson: hope is not in a leader, it is the spark of leadership inside each of us. Each of us has an instinct for what Kenneth Boulding called “integrative power.” In the Philippine revolution of 1986 it was dubbed “people power”: the flame inside of individuals that cannot be extinguished by either politicians or the corporate usurpation of humanity. In the form of Arab Spring, hope is now passing through the phase where individuals are awakening from inertia to restless action that can be perfected to greater degrees of effective nonviolence.

As a friend of ours from Damascus recently shared, “One of the main characteristics of the Syrian revolution is that we are all working openly. The wall of fear has disappeared.” That is a taste of hope.

Albeit unnoticed by the mainstream and its media, nonviolence did not rest on its laurels since the heyday of Gandhi and King. We have an international institution now called the “right to protect” (R2P) which puts in play what is otherwise an abstract notion: the unity of life. We have an International Criminal Court which, for all that it perpetuates in a retributive model of justice, does, again, signalize the underlying unity of all people. In the words of Francois Fenelon (1651-1715), which have somehow become buried under the rubble of our industrial civilization, “all wars are civil wars because all men are brothers.”  These are signs of hope, as is the fact that insurrectionary groups are learning to share their “best practices” with others around the world—witness, for instance, the Serbian Otpor presence in Tahrir Square. 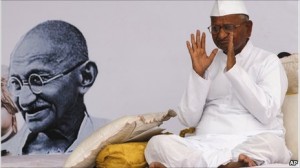 At the start of this week, in Delhi, Anna Hazare broke his fast for the right reason. It had done its work: Indian parliament agreed to the demand of Hazare and his supporters, “Team Anna” joined by some several hundred thousand Indians, that a commission of disinterested individuals be established to control the country’s rampant corruption.

What’s hopeful there is threefold: Hazare is orginally not “people” but person, so sparks of nonviolent energy are potentially everywhere—six plus billion of them. Secondly, Hazare has explicitly located himself in the Gandhian tradition, showing that “truth crushed to earth will rise again.” When something very positive about human nature is brought to the surface it is likely to stay there if and when individuals are imaginative and daring enough to seize on it. Thirdly, there are methods in nonviolence that awaken one’s adversaries to act against their self-will in favor of the well-being of something greater than themselves and their personal self-interest. We can even dare to hope that some of the people who went along with Hazare’s ultimatum sensed as they did so that their personal well-being was part of the whole and not in opposition to it. If that idea were to catch on, self-interested competition at the expense of others would be on the way out. The consequences are inspiring to contemplate.

What is preventing these hopeful developments and others we have not mentioned from becoming a whole new frame of reference? At the Metta Center, and elsewhere, we think the answer is to be sought by looking to ourselves. Gandhi called it svadeshi, or localism. Some years ago, when we told a young friend we wanted to start a new think-tank to develop an overview that would help these hopeful developments become a movement, Katie shot back: “We don’t need a new think-tank, we need a hope tank.” So we started one.

Each Friday after meditation and a potluck breakfast, we have discussions that are open but focused, namely on the theory of nonviolence, which we consider the essence of that spark. We invite you to host your own in your local community. Bring two or three friends, or strangers, together in a coffee shop, your living room, a community center, and have the audacity to explore possibilities, learn, discuss and create strategy for nonviolent change in all of its dimensions. Learn everything you can about nonviolence. Have full faith in the conclusion that Gandhi reached after fifty years’ ceaseless experiments: “nonviolence is the greatest force at the disposal of Mankind. It is the supreme law. By it alone can mankind be saved.”