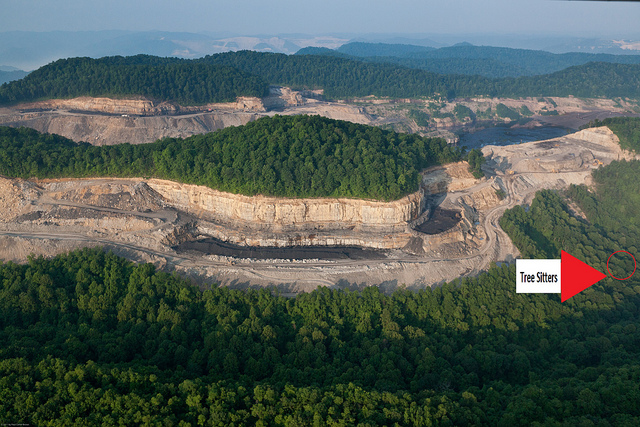 The next round in the fight against mountaintop removal is underway. With Alpha Natural Resources—a leading coal producer in the US—seeking to renew a strip mining permit, activists have been doing all they can to rally opposition ahead of tonight’s public hearing.

The most visible sign of protest has been what some are calling a “historic tree-sit,” which began on July 20, when a couple activists with the group Radical Action for Mountain People Survival ascended two trees, setting up camp on platforms approximately 80 feet off the ground. One of them has been there ever since, while the other left after 13 days. The latter spoke about her experience in the following video:

Tree-sitting has become a fairly common tactic for those fighting mountaintop removal since it stalls mining activities and gives activists on the ground time to pursue legal recourse. As a long-term strategy, however, it can be limited—particularly to the length of time a person can endure life in a tree. Julia Butterfly Hill famously lasted 738 days. But generally, a month is a real accomplishment. That’s why it’s good MTR opposition isn’t limited to tree-sitting. As Jeff Biggers reported for Alternet:

In an analysis of the water quality data from the Bee Tree Branch, Goodwin’s inspection with state officials found “quickly escalating levels of aluminum in a stream into which the Bee Tree mine discharges.”

This kind of science and investigative work provides an important balance to the direct action—not only because it gives activists more credibility against industry defenders who say they’re only out to take away jobs, but also because the health factor is becoming increasingly hard to overlook. A recent study found that cancer rates in mountaintop coal mining country are twice as high as non-mining areas.

The turnout at tonight’s public hearing and whatever transpires from it may signal the extent to which people in the Coal River Valley are fed up with the destruction of nature and the declining health of their community. If not, perhaps the tree-sitter can help bide for more time.

Hurray, I am pregnant! Oh wait, what about the planet?

What does a book have to do with a movement?