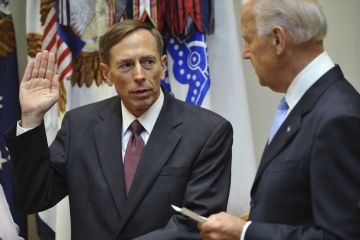 With newly retired General David Petraeus sworn in as the head of the Central Intelligence Agency last week, we are reminded, as the New York Times put it back in April when he was appointed to the position, that this is only “the latest evidence of a significant shift over the past decade in how the United States fights its battles — the blurring of lines between soldiers and spies in secret American missions abroad.” This shift of the agency’s function from gathering “intelligence” (we wish) to carrying out murderous operations has been going on steadily, and we all know what it means: torture has been enshrined as a regular feature of our military enterprise. CIA personnel regularly torture prisoners, regularly cover up much, but not all, of the evidence for these heinous crimes against humanity, and have, up to now, been winked at by the public and Congress for the part that comes to light.

Of course, this shift intensified after 9/11, and the tenth anniversary of that horrific day has given us an occasion to really revisit what it means. We should be aware that no people can survive such degradation of their most basic values. When the CIA/US Army shifts more and more to paramilitary operations it shifts more and more out of the few safeguards that were erected around  modern militaries to prevent them from carrying out grave abuse. It makes them look more like the death squads of Central America and Colombia than a democratic institution.

The medieval Church had its “secular arm,” to which “heretics” were handed over for (often horrible) deaths, providing the Church and the public with the convenient illusion that they had handed over with their victims the responsibility for killing them. The CIA (and doubtless other formal and informal “security” agencies to greater and lesser degrees) has its parallel in its “black budget” and even blacker deeds, its appeal to “security” as an excuse and cover-up for inhumane acts that can never bring security to any person or nation. The Church burned a French peasant named Jeanne d’Arc, whom it later declared had been a saint; what we are burning is the soul of American democracy.

I am focusing here on torture, but equally shameful and counter-democratic are the drone attacks which for me exemplify sheer cowardice and the necessity to carry all this out in secret so that, as the New York Times report of April 28 goes on to say, “the American spy and military agencies operate in such secrecy now that it is often hard to come by specific information about the American role in major missions in Iraq, Afghanistan, Pakistan and now Libya and Yemen.”

There are two things a democracy cannot tolerate, without losing its fundamental character: secrecy and violence. The latter may not be as obvious, but think about it: democracy derives its whole meaning from the sanctity of life, the worth of the individual. Violence negates both.

Perhaps the most important lesson to learn from this pernicious shift is that it was and will be inevitable, as long as violence—whether in uniform or not—is the underlying force on which we seek to build our security. The journalist Norman Cousins pointed this out long ago when it was revealed, thanks to the Freedom of Information Act, that U.S. Navy personnel some time after World War II had carried out an “experiment” of spraying lethal bacteria into the fog over San Francisco Bay, killing at least one person whose grandchildren were then suing the Government. As Cousins said, there is no such thing as a clean, sanitized military that can take over the job of protecting us: people have to protect themselves with the robustness of their institutions and integrity of their values, because when we set up an elite to do it for us with destructive force it will not be possible to keep that force within civilized limits.

There are thousands of Americans who have reached out to Muslim fellow Americans to counteract, one on one or in small groups, the dependency on violent defense by overcoming the very hatred and superstition that make us think we need it. There are peace ambassadors like the tireless activist (and Waging Nonviolence contributor) Kathy Kelly who have gone to Afghanistan to carry reconciliation to the lands most devastated by the perceived need for revenge. These are the people who are really showing us the way to security, and with it the real defense of everything that makes our democracy meaningful.

The official story about the reason for 9/11 attacks has it that “they are jealous of our freedoms.”  If so, we have handed Osama bin Laden and his cohorts a victory they could scarcely have dreamed of, for a people that gives away its moral integrity to a clandestine force is neither brave nor free. In the end, the entire system of war and militarism will have to be replaced by nonviolent equivalents—and they do exist—if we want our democracy to be real. The torture and secrecy that have now come to light in the heart of that system is a good place to start.

Death squads and democracy: a hidden legacy of 9/11