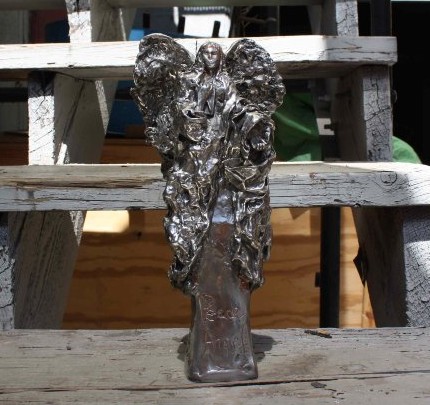 I’ve always liked the War Resisters League’s broken rifle logo.  But it raises a question: What do you do with all that metal after the gun is snapped in half?

While the Bible talks about beating swords into plowshares, over at God’s Politics, Sojourners web editor Cathleen Falsani writes of another, more artistic possibility. Some of the more the 2,700 guns that were traded for grocery gift certificates at a gun buy-back event run by the Violence Prevention Coalition of Greater Los Angeles (VPC) earlier this year are now:

being “up-cycled” — melted down and re-purposed — as works of art.

One such guns-to-art creation is the “Angel of Peace” sculpture by artist Lin Evola, founder of the Peace Angels Project in California. Founded by Evola in 1992, Peace Angels “uses art as a tool for peace, working with schools and organizations at both a local and global level.”

As Zak Stone writes in GOOD, VPC has also comissioned a series of these statues “to commemorate the work of local leaders who take a stand against violence with their ‘Angel of Peace Award,'” and is getting the local community involved in the process:

“Every time the kids would come in, they’d bring other kids,” says Hector Calderon, a graffiti artist and metalsmith at La Fonderie who coordinated the youth program. Athina Cuevas, a 21-year-old intern at Homie Unidos, says she helps out because she “believes in a world without violence.”