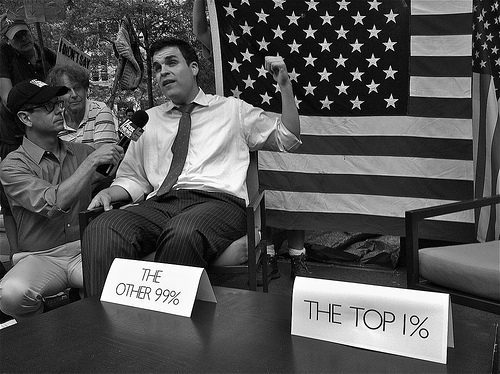 Occupy Wall Street has signaled the changing weather of a looming “American Autumn” and consequently galvanized the progressive movement. The 99 percent, as they call themselves for the interests they want to represent, have shown tremendous courage in the face of police brutality. They have also demonstrated remarkable perseverance, despite the general lack of accurate mainstream attention on their efforts to reclaim a democracy that takes the human being into account over corporate interests. But perhaps the most inspiring aspect of this movement is that its members are choosing nonviolence to achieve their objectives. Nevertheless, there is little doubt that the movement would be more inspiring, more effective, and ultimately truly nonviolent, by including the one percent.

Nonviolence is not a mere strategic tactic as touted by scholars of political theory, including some within the progressive movement itself; it is more comprehensive, and as such, much more powerful than the limiting definition these people have adopted (to our detriment as a movement with a real future). The basis for the power of nonviolence is emerging more and more in science, not to mention that it has always existed across the wisdom traditions—namely as a positive force governing human interaction that allows us to build deeper bonds and uncover a greater sense of unity as people.

Gandhi (who celebrated his birthday on October 2nd) said, “It is the law of the humans,” meaning, we exercise our full humanity as we exercise our full capacity to do good to others. And it is illogical to think that we can raise the image of humanity if we do not take all of humanity into account. Within that excluded one percent are people, indeed some powerful people who will simply point out our hypocrisy of methods if we dehumanize them in our movement. When we use dehumanization as a tactic, we borrow it not from any true theory of nonviolence, but straight from the paradigm of violence. It is the violent who gave us “corporate personhood;” we need to espouse radical humanization to set right that distortion.

As Gandhi disclosed in regard to his national struggle against the British Raj, “Behind my non-cooperation, there is always the keenest desire to cooperate on the slightest pretext even with the worst of opponents.” Of course we are not blind to the evil that has been perpetuated in the name of citizens of the United States by the one percent. Those grievances are well known. Nor do we deny that there is a group with whom we are in opposition; but we have to be clear about where that opponent resides. When Gandhi says that he is willing to compromise with his opponent it is because he was aware of a higher reality, that we are an interconnected whole that in the end, our opponent is none other than ourselves.

“Conquer anger,” the Buddha says, and “you will conquer the world.” It is in conquering ourselves that we will begin to conquer our foes and have the full force of nonviolence at our disposal for persuading our opponent to change, not by violence or domination, but by employing the right means to, as Gandhi said, “compel reason to be free.” Conquering anger does not mean suppression or passivity, it means using it for constructive ends; it means transforming it into a creative force. Gandhi put it this way, “I have learned through bitter experience the one supreme lesson to conserve my anger, and as heat conserved is transmuted into energy, even so our anger controlled can be transmuted into a power which can move the world.”

This is the secret of nonviolent action: conserved anger can become love, not a soft, passive love, but a love that can disarm a person expecting a harsh remark or an insult. Our friend David Hartsough, for instance, experienced this force at a lunch-counter sit-in in a segregated Virginia. When his life was threatened with a knife at his chest by an angry segregationist, David, in an effort to transform his anger and fear turned to his aggressor and said quietly, “You do what you think is right brother, and I will try to love you anyway.” The man dropped his knife, began to cry and left the restaurant.

This is why at the Metta Center we recommend finding a spiritual practice such as meditation. We recommend practicing it everyday, anywhere. Gandhi himself turned prison time into an opportunity to meditate and continue to build the movement. With the October 2011 protests looming large, we have a great opportunity to keep our flame going and build it and other protests currently underway into an enduring movement. That one percent of energy saved each day in meditation is going to keep us from burning out, from harboring resentment and anger, and for keeping the struggle going for building a nonviolent future for the United States. We will get there fully when we are chanting, “A nation united can never be defeated” and mean all of us, 100 percent.