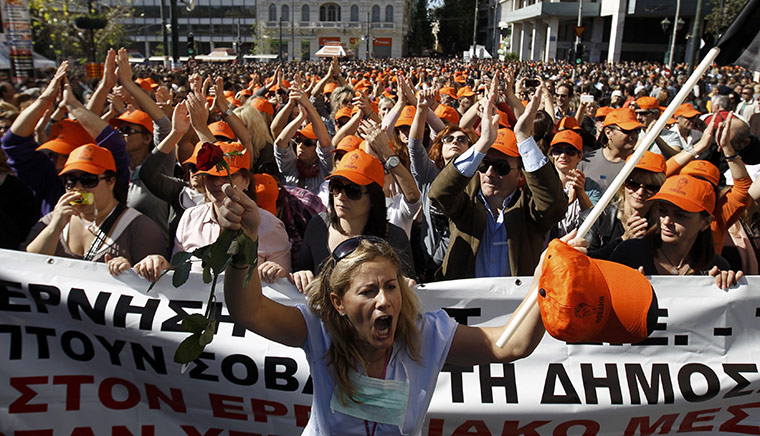 In an effort to stop Greece’s parliament from voting for further austerity measures today and tomorrow, the Greek people have effectively shut the entire country down, as part of the 48-hour general strike. As Time reports:

The strikes have shuttered government offices, public services, shops and even bakeries. Taxi drivers walked off the job, as did air-traffic controllers (though they shortened their work stoppage from 48 hours to 12).

Unfortunately, as has been common in past demonstrations in Greece, some protesters broke windows of storefronts and clashed with the police, throwing rocks and molotov cocktails at them.

Despite the many images of such violence, Theodora Oikonomides, a Athens resident who was at the enormous rally today at Syntagma Square told the Guardian that:

A group of between 20 and 40 people, really no more, then started throwing stones. I recognised some of them from previous events. They never seem to get arrested.

From footage of the clashes, her estimate seems to be far too small, but most reports have said that the group engaging in violence was a small minority of what was an otherwise peaceful strike and rally.

The Associated Press is now reporting that the vote this evening went in favor of the further austerity measures, but the bill will not be passed until its articles are voted on tomorrow.

As I watch the Greeks give everything they’ve got to stop this legislation from going through, I couldn’t help but wonder why protests in the US haven’t attempted a general strike, which is one of the most powerful nonviolent tactics.

Yes, the United States is a much larger country both geographically and numerically, which would make organizing such an action more challenging, but if Greece can pull it off, why can’t we?

If the Occupy Wall Street movement is eventually to put the kind of pressure on the government and corporate power to truly address the structural problems with our economic and political systems, a serious nationwide general strike that clearly demonstrates who actually makes this country tick may be called for.

If the Greeks can shut their country down, why can’t we?