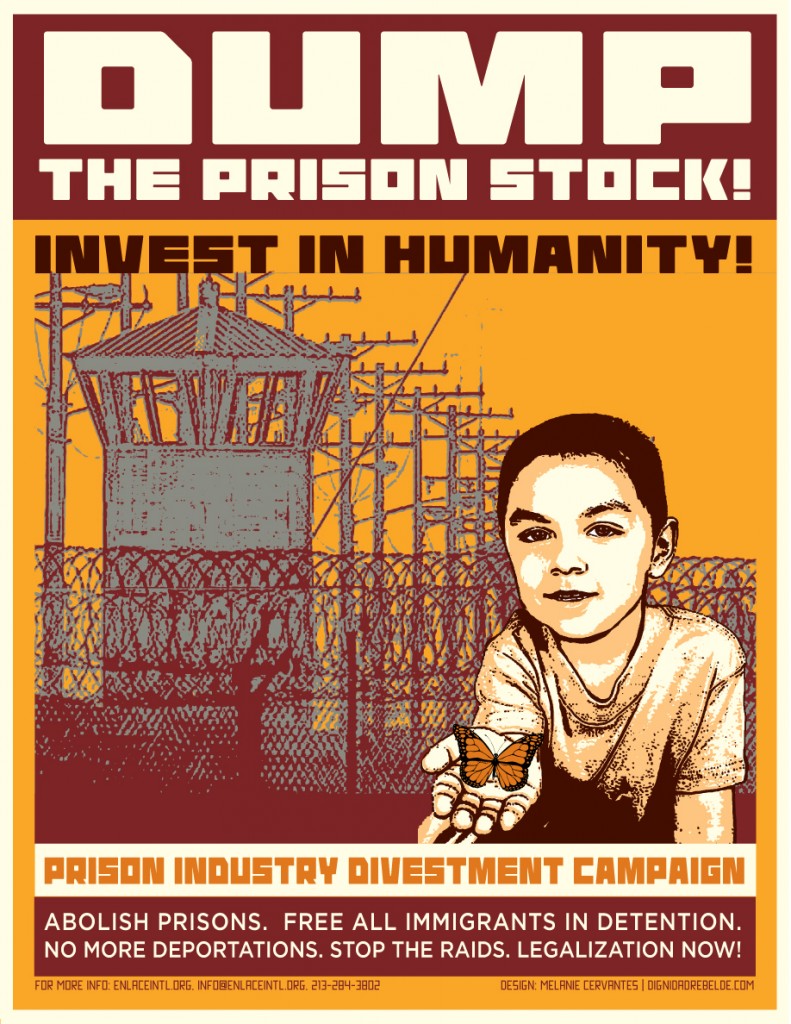 Local community-based immigrant advocacy groups, including VOZ, Oregon New Sanctuary Movement (ONSM), and the Partnership for Safety and Justice, converged in a peaceful demonstration this past Saturday outside of the Wells Fargo building in Portland, Oregon as part of a nationally coordinated effort in support of the National Prison Industry Divestment Campaign. Demonstrations, workshops and other actions were held by partner organizations across the country in the cities of Wichita, New York and Seattle.

Protestors called for the immediate divestment of investments made by Wells Fargo and other major shareholders in private prison corporations such as the Corrections Corporation of America (CCA) and Geo Group Inc., whose business models actively pursue harsher immigrant incarceration policies such as those seen in Arizona, Georgia and more recently Alabama.  The detention centers and prisons that these and other corporations bank on are often plagued with instances of sexual and physical abuse against immigrants who do not have access to legitimate legal recourse due to their status.

Peter Cervantes-Gautshi, (check out his highly censored story, Wall Street and Our Campaign to Decriminalize Immigrants), who was present at the Portland action, stated that “we wanted to show Wells Fargo that this movement is growing and that more and more people are becoming aware of their involvement in using tax dollars to put people in cages. They need to instead invest in creating good jobs for people.”

A delegation of demonstrators also entered the Wells Fargo building in order to inform the manager that failure of the bank to divest its shares from corporations that promote severe incarceration practices and policy will result in a substantial amount of customers closing their accounts. The manager was not present and the delegation was shuffled off to someone who, according to Cervantes, “had little authority and was less than helpful.” The demonstration outside remained lively and spirited as drivers honked in support and pedestrians gave their “thumbs-up” of approval.

Meanwhile in Kansas, Sunflower Community Action (SCA) held a Popular Education Assembly designed to educate the public on the connections between the new wave of anti-immigrant laws, the private prisons that lobby for them, and the bank that provided the investments to make it all possible: Wells Fargo. SCA is calling on Wichita to join people across the country in divesting from, and refusing to do business with Wells Fargo.

The protests are part and parcel of a series of nationwide demonstrations implemented by an impressive network of community organizations who have decided to heed the call for a national month of action. Through educational workshops, nonviolent direct action and concrete strategies for demanding shareholder divestment, the campaign intends to raise public awareness regarding the intricate and nefarious relationship between big business (aka Wall Street) and government within the rubric of the prison-industrial complex.

Previous actions have taken place in cities such as San Francisco, Minnesota and Denver, with more planned next week, including Wichita’s Zombie Crawl later today, where members of Sunflower Community Action, in solidarity with the OccupyWitchita movement, will present a theatrical memoir entitled, “Investments of Mass Destruction.”

These events have been particularly effective in tying together the multitude of seemingly disparate demands (the proverbial “laundry list”) that have come out of the Occupy movement. Organizers and spokespersons have proven adept at demonstrating and highlighting the fact that corporate-government collusion is the root cause of innumerable consequences of misery, inequality and poverty.

I see this campaign as one of the more effective and substantial movements to be explicitly aligned with the “Occupy” sentiment in that its primary participants and organizers are speaking directly to the reality of the most downtrodden and impoverished segment of the 99 percent, particularly the constituent members of our nation’s disenfranchised communities of color.

Yet the campaign also does not ignore the systematic targeting, dehumanization, humiliation and torture of those who aren’t even counted amongst the “official” 99 percent, namely the undocumented, whose only “crime” more often than not is earning an honest living through the provision of essential services that the “documented” covet and demand.  Yes, you can tell a lot about a person and a nation based on how they treat the “least amongst us.”

At the core, this divestment campaign isn’t about papers (no, not even the green ones); it is about dignity and unity. For what good is paper if it can purchase and/or confer the ‘legal’ right to kill, steal, exploit and imprison the innocent and hard-working with impunity? Our solidarity is, and now must prove to be, mightier than the dollar. Divest from corruption. Occupy Everything. Together as one.

All is not Well with Fargo: divesting the revolution