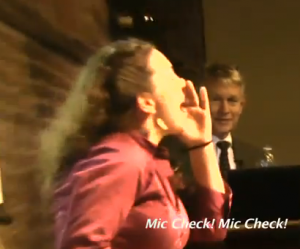 I did my best to smell and look expensive, like someone who would normally come out on a Monday night to hear “venture capitalist and turn-around CEO Steven Pease,” author of a 622-page book called The Golden Age of Jewish Achievement. The program began with a complimentary light dinner, then the talk: “Why Jews are Disproportionately High Achievers.” This was the first in a series of Wall Street-oriented events hosted at Birthright Israel’s alumni headquarters, a loft on West 13th Street with exposed brick walls and tasteful track lighting.

Inside my free copy of The Golden Age of Jewish Achievement—Birthright, flush with the cash of Wall Street bajillionaires like Michael Steinhardt, is very big on free—I found tables with statistics: 21% of Ivy League students are Jews, 11% of senators, 40% of NBA team owners, 31% of Forbes’ 400, 24% of Fortune‘s “25 Most Powerful People in Business,” 72% of “25 Real Estate Fortunes Among Forbes 400,” 23% of all Nobel prizes, and on and on. In every arena you could think of, Pease extolled “disproportionate Jewish achievement.”

The last time I’d been in that loft was early 2010, for a pre-trip Birthright orientation. (I wrote about my subsequent trip in The Nation.) But this time, I came with ten young Jews—a minyan—to Occupy Birthright. To liberate Birthright by repurposing its space.

It turns out that the human microphone is a powerful disruptive tool. Last Thursday, for instance, teachers in Chicago rather awesomely Occupied Scott Walker. “Mic check!” they yelled, times two, and proceeded to shut down a fancy breakfast.

“Watch out for the microphone,” Steven Pease told me as I stepped over the cable, en route to the food table. He is a kindly gray-haired man, with a pair of glasses perched atop his head. “Aren’t Jews very accomplished at everything?” I goaded him on. “I thought we were the best at not tripping.” He smiled and answered, “Basketball, the Olympics—very good.” This man apparently cannot be satirized.

I wanted to know who these people sitting around me were, what kind of jobs they work, how they feel about the occupiers laying claim to public spaces and shaping them for their own purposes. But then my friend and co-interrupter Max interrupted my schmooze plans, pointing out the chapter in Pease’s tome devoted to glorifying Lev Leviev, the blood diamond billionaire and settlement construction impresario. Leviev was once a major Birthright donor.

Generally speaking, I’m not much of a chanter. “You come from a long line of cowards and draft dodgers,” my dad has always told me. “Stand at the back.” At demonstrations against the Separation Wall in the Occupied West Bank, I’ve coughed and cried from IDF tear gas—but it was carried on the wind. I am the rear flank by default. And there is a further way to achieve a comfortable distance from experience: scribbling constantly in a notebook.

Israel-loving Jews have a special rage for disrupters. Last November, at the annual Jewish Federations of North American General Assembly in New Orleans, members of Jewish Voice for Peace—which also helped organize this Birthright interruption—stood up one by one interrupting Benjamin Netanyahu’s speech. A rabbi ripped one protester’s banner with his teeth. The final interrupter was put into a chokehold after she unfurled a banner that read, “The settlements betray Jewish values.” The man who choked her turned out to be a 7th grade teacher at his synagogue.

We waited and waited for the opening mic check. Steven Pease told us about how he started using Excel spreadsheets to catalogue Jews, like some kind of pre-assimilation “who’s a Jew” throwback. It was cultural, not genetic, he explained. “There’s no reason why blacks, Germans, Jews, Hispanics—anybody—can’t do this.” If Pease said any of this down at occupied Zuccotti Park, everyone would probably lump him in with that anti-Semitic nutjob yelling, “Jews control Wall Street!”

And then, at long last, the mic check came, and we filled the room with our voices, purging it of all the grodiness we’d just heard. We began:

We are
the Jewish 99%
and we’re calling all Jews
nationwide
to join in solidarity
with Occupy Wall Street
AND with Palestinians
who live under occupation
every day!

Let’s stand up
to the 1%
Of the Jewish community
Birthright doesn’t represent us
We will not be fooled
by corporate CEOs
telling us
we are the Chosen People
and reinforcing
Jewish stereotypes.
We won’t be bribed
with free trips to Israel
that whitewash
the occupation of Palestine.
We demand
a redistribution of power
in the Jewish community.
We are young
Jewish
and Proud!
Throughout history
Jews have been persecuted
as scapegoats for powerful bankers.
These memories
give us responsibility
to speak out
against corporate exploitation
and human rights violations.

We made it through a few more verses and were not exactly greeted with applause. A man behind me asked, “Are you guys anti-Semitic?” Two of the women in our crew had their mic check scripts grabbed by their seatmates, who ripped them up into shreds. A man near me corrected, “Gaza isn’t occupied.” (Tell that to the Gazans, or tell that to the activist-filled flotilla that was boarded and diverted by Israeli forces in international waters on Sunday.) There were, of course, calls for us to “get a job.”

And so, one by one, we were (gently) ejected. Liza Behrendt, a rosy-cheeked interruption co-organizer, was led to the curb by a Birthright employee who remarked somewhat mournfully, “You ate all our food.”

We did our best to continue the occupation from the sidewalk. Our voices were becoming hoarse, and we grew tired. Soon, we acquired a disgruntled passerby, an ultra-Orthodox man getting in our respective faces. He shouted down the human mic’s solo shouter, demanding a “dialogue” none of us wanted, utterly derailing the repetition by turning us into a confused clamor. In this way, the human mic is only human.

Chanting half-heartedly, we asked one another if it was time to go home. What’s the point now? Something hard and angry flashed within me as the shouting grew intolerable. As if I were watching an out-of-body experience, I saw myself jump the ultra-Orthodox man, but didn’t. Never before have I fantasized violence.

A fresh-faced girl of about 17, apparently a neighbor, pranced into our chanting sidewalk cluster while doing a little dance, her long hair flowing behind her while she chanted in a  singsong voice, “You guys are all douchebags who don’t know shit about Israel.” Soon she was shouting and being shouted at, the rage level of the whole group rising, the crowd becoming a mob. The next thing I saw was the girl hitting a Palestinian woman named Nancy in the face, to which Nancy replied with a flurry of fists. They were pulled apart, no one hurt. I wondered if those had been the first blows between an OWS protester and counter-protester in New York to date.

Human mic speeches began, and my friends spoke eloquently about the dispossession of 750,000 Palestinians in 1948—the occupation of Israel. We were joined by a crew of Palestinians from the Jenin Freedom Theater, a renowned institution in the West Bank. “Where is their Birthright?” shouted my friend Max.

After nearly two months into OWS, I had never been the solo shouter on a human mic. As the others speechified, I felt crippled with the fear of stepping up and finding myself at a loss for words. But something shifted inside me. Maybe it was the mob mentality’s capacity for good that suddenly compelled me to shout “Mic check!” with no pre-planned speech in mind. I will never watch the video, because I know it was glorious, and I don’t want to risk watching anything that might suggest otherwise.

“I am a Birthright alum,” I began.

Eventually the police came. A too-skinny woman with a tan in November, Birthright’s Rebecca Sugar, tried to talk the cops into arresting us. All the Birthrighers had left and the lights had been turned off. Sugar took them inside. When they emerged, her thin lips were all the more pursed in displeasure.

“Next time you do this at an event like this,” the cops told us, “there’s going to be a police barrier.” We laughed. One woman retorted, “What are you going to do—barricade this whole city?”

The cops slammed their cruiser doors. “You guys are behaving like children,” they said with irritation. We cheered: a collective thorn in the side of the powerful.

Kiera Feldman, a Brooklyn-based journalist, has reported for The Nation, Mother Jones, n+1, PRI’s The World, AlterNet and Killing the Buddha. Follow her on Twitter.

Should we fight the system or be the change?