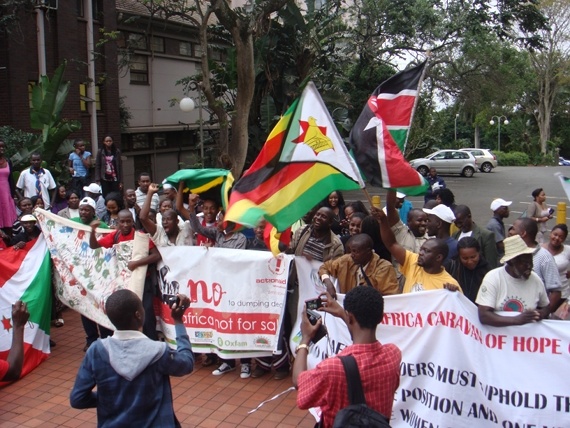 Most of the rich nations gathering at this year’s UN climate summit have already conceded defeat when it comes to producing any kind of binding treaty to slow greenhouse gas emissions this decade. But that isn’t going to stop poorer, more climate-vulnerable nations from trying.

Costa Rican president José María Figueres is calling on these vulnerable countries to “occupy Durban” — the South African city hosting the summit from its launch yesterday until December 9th.

“We went to Copenhagen [in 2009] with the illusion we could reach an equitable agreement. We went to Cancún [in 2009] where we saw slight but not sufficient progress. Frustration is now deep and building. Now we hear that we will need more conferences. Sometime we have to get serious. We should be going to Durban with the firm conviction that we do not come back until we have made substantial advances.”

While it is not known whether anyone will take up Figueres’s call to action, the Guardian did speak to one ambassador who said, “In the corridors [here] there is talk of occupying the meeting rooms, but there could be sanctions. So it needs to be big inside in order to have impact and nobody is punished. We are at the beginning.”

The Guardian also noted that Seyni Nafo, spokesman for the important 53-country Africa group, is on record as saying, “Action that might make it [climate change] visible must be considered. We are exploring a lot of avenues and options. You have to take that seriously.”

Meanwhile, outside the conference space, protestors have formed Occupy COP17 (as this is the 17th Conference of Parties to the Convention on Climate Change). The General Assembly held its first meeting yesterday against the backdrop of a banner that read “Conference of People.” Before breaking off into groups to discuss ideas for solutions to the climate crisis, former Bolivian Ambassador to the UN Pablo Solon took the people’s mic:

This point has been raised by many African environmentalists as well. At a COP17 protest in Johannesburg on Saturday Earthlife Africa program officer Makoma Lekalakala told the South African Broadcasting Corporation that she was marching to “make sure that this COP doesn’t become another failure, a failure that would cost the lives of millions of South Africans.”

To further highlight what many Africans may soon face as a result of climate change, civil society groups have set up a mock refugee camp near the convention center, where about 2,000 climate justice activists from around the region will be based during the next two weeks. One of their main goals is to get the youth involved, which is vital since they represent 70 percent of Africa’s population.

There are some, however, who are already involved. About 200 young people traveled from Nairobi for two weeks in a caravan of buses through Tanzania, Malawi, Zambia, Botswana and South Africa, organizing concerts along the way to draw attention to the impacts of climate change. Now in Durban, they plan to organize more events that will appeal to the African youth.

As pressure mounts both outside and inside a climate conference many people see as one of the last great hopes to avert the worst effects of climate change, it’s worth pointing out, as Occupy COP17 does on its website, that Durban is the place where “Nelson Mandela cast his first vote and Gandhi held his first meeting.” In other words, Durban is a symbol of what people power can achieve and these next two weeks are without a doubt the right time for that legacy to grow.

Occupy Durban: climate talks draw protests inside and out