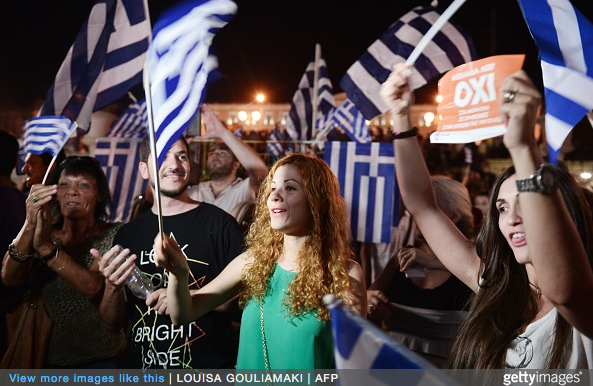 After dining on cod on July 7, European leaders representing the economic elites went back to work figuring out how to run over the Greek majority in Europe’s first democracy. The serving of cod, presumably from Iceland, is ironic considering that it was the Icelanders who six years ago defied European investors — and by doing so saved their economy and bolstered their well-being. Movements for justice around the world have much to learn from keeping in mind both of these national dramas.

When Iceland’s 1 percent brought the economy to its historic crisis in 2008, Icelanders could not get any money from their ATMs. It was the worst economic collapse in Europe since World War II.

When Greece’s 1 percent brought the economy to its downward economic spiral in 2010, Europe’s 1 percent stepped in and Greece’s centrist government accepted the imposition of austerity measures. The result of the ensuing five years of austerity? Greece now threatens to beat Iceland’s record as Europe’s worst economic collapse.

When Iceland fell apart it initially followed the rules, turning to the International Monetary Fund for help. However, the people brought down the ruling government and installed a leftist government that defied the IMF’s prescription. Iceland quickly rebounded, avoiding high unemployment and preventing people’s loss of their mortgaged homes. Iceland’s democracy refused to bow to the IMF’s austerity requirement, and bailed out the people instead of the banks.

In contrast to the results in the United States and Europe of post-2008 austerity, where the wealth gap has widened, Iceland’s solution produced a shrinking of its wealth gap. Iceland increased its social safety net, increased taxes on the rich and reduced taxes on low-income people. In the U.N.’s 2012 World Happiness Report, Iceland came in number 1 in the world.

During a research trip to Iceland in 2014 I interviewed education professor Hanna Ragnarsdottir and asked her about the impact of the collapse on Icelandic education. “We had to tighten our belts, or course,” she responded, looking solemn and pausing in thought for a moment. Then, to my surprise, she told me that they avoided laying off teachers or other staff. They did leave vacant some positions and put off new projects, but “now things are looking up again,” she said.

While there are many economic differences between Iceland and Greece, I’m struck by the overwhelming determination in both countries to take charge of their own economies. Their popular movements understand that austerity is actually a weapon in the class war. In Iceland, the majority was able to reclaim self-determination and create a left solution to their economic crisis — and it worked. Nobel prize-winning economist Joseph Stiglitz said, “What Iceland did was right. It would have been wrong to burden future generations with the mistakes of the financial system.”

At the moment, the Greek majority is fighting for the same freedom, but the famously undemocratic European Union has no intention of allowing anything except its 1 percent solution.

What does this mean for social movements in the United States and elsewhere?

Make transparent the costs of the austerity weapon.

Fortunately, when the IMF urged cuts in health care Stuckler and his colleagues were called in by the Icelandic leftist government for a consultation. The government learned that going along with the IMF would mean increased disease, injury and death for Icelanders.

Using international statistics, Stuckler demonstrates that the United States and other countries have been suffering unnecessary disease, injury and death by allowing the economic elite to run the economy. Social movements could empower nurses, doctors and social workers to tell the truth about the terrible price to our health.

Don’t wait: Create crises to expose the role of the economic elite.

In both Iceland and Greece the majority allowed the minority to create their crisis through wrecking their economies. The U.S. majority up until now seems willing for the 1 percent to wreck our economy through its climate policies.

As strategist Bill Moyer pointed out in his 2002 book “Doing Democracy,” the role of social movements is to create a mini-crisis that alerts the majority to what has been going on behind its back. That’s what the campaigns of the civil rights movement did in Birmingham, Selma and elsewhere. Some activists do understand the need for a “crisis” and try to induce one by creating one-off mass actions where the power-holders gather, but mass bashes at summits and political conventions have diminishing value.

The Student Nonviolent Coordinating Committee and Martin Luther King Jr. showed that a crisis created by a nonviolent campaign is the more effective wake-up call to the majority. Strategic 1 percenters sometimes realize this and attempt to head off crises that expose them by giving way, making compromises and accepting our demands. The movement gains whichever response the economic elite makes: either concrete gains that give a despairing people hope that action matters, or stonewalling that provokes a deepening crisis that puts a brighter spotlight on the greed and incompetence of the economic elite.

It’s easy at a distance to say that Icelanders and Greeks could have saved themselves a whole lot of trouble by mounting focused mass nonviolent direct action campaigns to stop the abuses of the elites in their countries, for example, the avoidance of taxpaying in Greece. If the series of nonviolent campaigns grew — as they did in Norway and Sweden in the 1920s and 1930s — the economic elite would have found their position eroding and a power shift might have occurred. A tiny glimpse: Norwegians can go online and read the tax return of anyone in the country. Those are the kinds of tools made available once the majority has established a real democracy.

Build alternative institutions that build confidence, the skills of cooperation, and teamwork.

Middle class Americans are generally brought up to be competitive with each other. At the same time, they are socialized to accept the overall norm of fitting in, including joining the larger agenda of the owning class. That’s one reason why middle class white anti-racist activists compete with each other (“Who’s more politically correct than whom?”) while refraining from campaigns that could actually dislodge racist institutional patterns.

Dealing with one’s own compulsion to be competitive is tough, but a useful arena for change is community, and we can create community in our living choices, activist organizations and co-ops.

Assist the majority to realize that the economic elite plays by different rules.

The willingness of national elites in Iceland and Greece to support international muscle to hold on to wealth at the price of the suffering and death of their compatriots can be hard for majorities to wrap their minds around. Nationalism still has its appeal, and it is especially challenging for people raised middle class to be duly cynical about their masters — in the United States, as well as in other countries.

Many of us need to learn cynicism. As Aldous Huxley wrote, “It’s good to be cynical, if you know when to stop.” The stopping point for me is at the point of movement-building, to be warm and welcoming to those members of the owning class who courageously join the rest of us in putting the common good first. That kind of togetherness — solidarity — is the best alternative to nationalism.

How the Mississippi Freedom Summer can be best honored

4 lessons from Iceland and Greece for movements fighting austerity