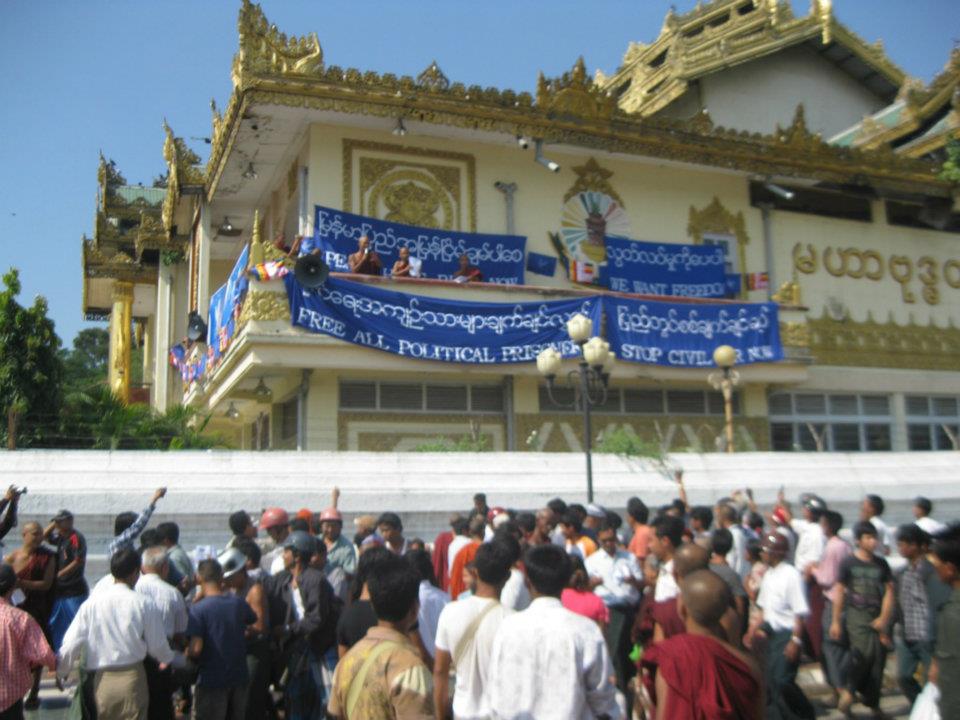 Burma is now seeing it’s own version of the Occupy movement. On Tuesday, a group of monks staged an occupation of the Maha Myat Muni Pagoda in Mandalay, which is one of the most revered Buddhist sites in Burma. They made their presence and intent known by hanging large banners that read “We want freedom,” “Free all political prisoners” and “Stop civil war now.” Throughout the day they gave speeches to the expanding crowd of monks, civilians, and secret police. People donated water, food and other supplies and sent it up to the occupiers via ropes.

This protest comes at a crucial time as Burma’s ruling officials are trying to win over the international community into believing that real democratic reforms are happening. On Monday, there was expected to be an additional release of political prisoners, however, the releases never happened. Despite growing conflict and human rights abuses in the country, the Association of Southeast Asian Nations (ASEAN) granted Burma a huge prize by announcing on Tuesday that Burma could take the chairmanship of the regional body in 2014. So Burma’s political prisoners stay locked up, and even more get detained. Since the elections last year, Burma’s political scene has been a mixture of minimal changes followed by brutalities against activists and ethnic minorities.

This current protest is a direct challenge to the regime’s propaganda of reform. The monks’ demands are simple: a release of all political prisoners, an end to attacks against ethnic communities, genuine talks of national reconciliation and lifting of censorship laws that prohibit monks from preaching freely.

This is the largest public demonstration of monks since the 2007 Saffron Revolution and this protest aims to reignite that public memory. It is strategically important that they are holding this protest in Mandalay, which is Burma’s second largest city and is also where the country’s largest congregation of Buddhist monks resides. Many young monks have eagerly listened to the words of those protesting and reigniting their fervor can have huge consequences. There are as many monks in Burma as there are soldiers.

Local authorities don’t want to risk the public backlash that cracking down against the monks would cause, and so have been working to suppress the protest by utilizing elderly Buddhist clergy. These abbot monks have been pressuring the protestors to move locations and stop their actions. A negotiation was reached to move to another monastery, and when they did over 1,000 people followed them. The monks have vowed to continue their protest, but it is uncertain how long police will let it continue.

One of the leaders, Ashin Sopaka, is a friend of mine and I know he does not give up easily. He understands the risk of such an action, but also recognizes the importance of publicly testing Burma’s leaders to see if they are still just the same generals but in civilian clothing. You can stay up to date on what is happening via this Storify.