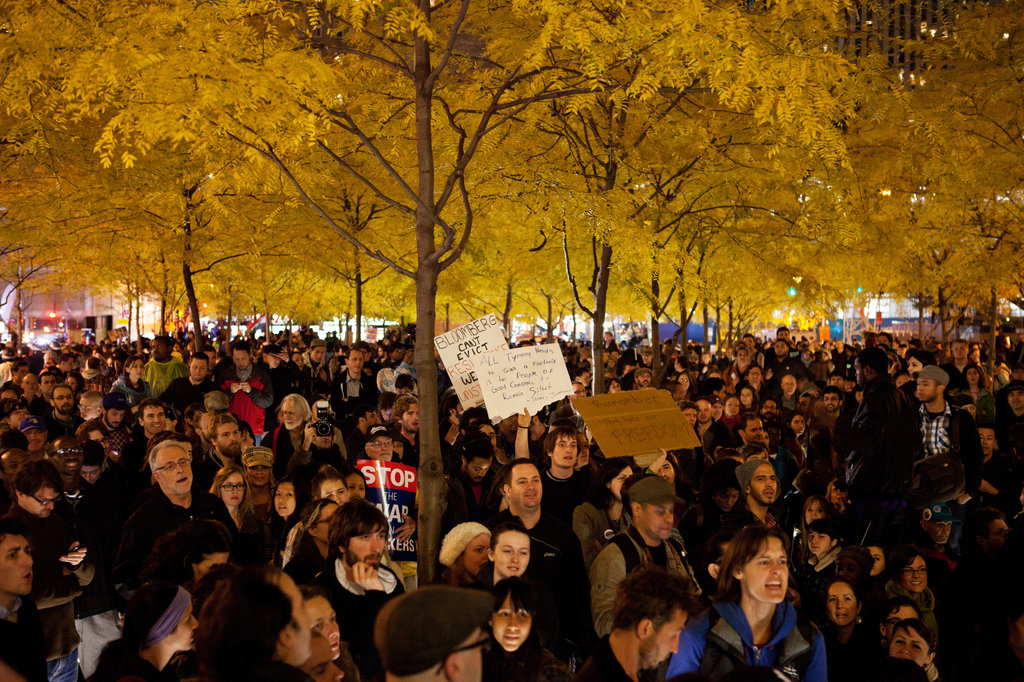 The heart of Plato’s Republic is a treatise on how humans are to organize themselves into a collective form of governance so as to best steer the ship of state. Five forms of government are posited—aristocracy, timocracy, oligarchy, democracy, and tyranny—and philosophized about to determine which is most fit to govern the city. Lest we jump to quickly to conclusions, I’ll spoil the surprise for the high school seniors getting set to take on massive college debt to read Plato in freshman seminar: it’s not democracy.

So Plato—one of the most influential philosophers whose mentor (Socrates) was executed by the state—would not be a fan of Occupy Wall Street’s scathing critique of the corporate state? Hardly. He was just intimately aware of the dangers of majority (mob) rule as well as the tendency toward violence, repression, and injustice in timocracy, oligarchy, and tyranny. His vote—pun intended—was for an aristocracy where the philosopher-king (sic) ruled. Democracy, for Plato, is dangerous because of the willy-nilly nature of the masses, whose opinions can sway as quickly as the winds blow. It was direct democracy, after all, that sentenced his mentor to death. And as poll after poll shows—from Presidential candidate primaries to Jay Leno’s infamous “Jay-walking”—America may not be ready for direct democracy a la Athenian style.

But the course of human history has revealed, with particularly urgent reminders in 2011, that the people want to have a say in how their lives are governed. The philosophers and the ruling elites will acknowledge such desires with compassionate concern and then abruptly dismiss them as being naïve, too unrefined, and incapable to steer the ship. But this Platonic problem—how to steer the ship—lies not in rendering the leader(s) best fit for the helm, but in the size of the ship itself. It is a lot easier to steer a canoe than an ocean-liner. Too many captains on the ship? Well it’s a lot easier to reach consensus on a fishing boat than the Titanic.

Consider this: the titanic banks that are too big to fail demand the centralized power of the solitary philosopher-king type aristocracy for business as usual to function. But break those banks up, decentralize their power, localize the monetary reserves and fiduciary responsibility to neighborhoods whose charter is tied to rule of the people on the block, and that ship sails a lot smoother.

Critics no doubt will dismiss it a well-intentioned idealism and that we are stuck with what we got. But as General Assemblies, working groups, and Spokes Councils—including all their flaws and weaknesses—have proved able to steer the ship. Or rather, the many ships that is Occupy. As much as this movement is about saying no to the oligarchy disguised as an aristocracy that pretends to be a democracy, it is also about popular education, making each person fit to “rule” and giving their voices a platform to be heard—even as it struggles to do that with the vestiges patriarchy, racism, and other forms of oppression lingering in this movement.

At its best, having a preferential option for traditionally marginalized voices, so long as it avoids tokenism, can be recourse for building more inclusive, participatory communities. Speaker stacks that limit speaking time to two minutes force participants to clarify their thought and prevent opinions and comments from devolving into diatribes. Practices like the 90 percent majority rule for proposals to pass GAs at OWS and Occupy Chicago are examples of modified consensus that can be an added protection against 51 percent mob rule.  The nonviolent people power of occupations and alternative forms of governance and decision-making that share power is a paradigm shift for what is possible. We are the 99 percent and we are the philosopher-kings, queens, and rulers of our own collective future.

Occupying and steering our own ship