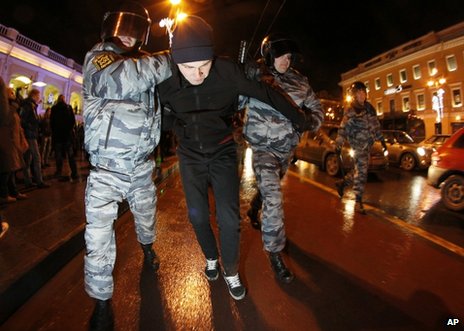 Allegations of electoral fraud have sparked protests throughout Russia. As many as 6,000 people took to the streets of Moscow Monday night; several hundred protesters, including well-known blogger and anti-corruption activist, Alexey Navalny, were arrested in Moscow and St. Petersburg (According to the BBC there were close to 600 arrests in Moscow alone). “The reaction to last weekend’s fraud-tainted parliamentary elections has been like nothing I have seen since the early 1990s,” wrote Maxim Trudolubov, an editor at the daily business newspaper Vedomosti.

Though discontent with the Kremlin and ruling party, United Russia—dubbed the “party of crooks and thieves” by Navalny—has boiled over in recent weeks (most notably when Vladimir Putin was booed after taking the stage at a mixed martial arts event), few expected parliamentary elections would be the catalyst for large-scale demonstrations. The opposition has called for a follow-up protest on Saturday to take place in Revolution Square, just several hundred feet from the Kremlin. Demonstrations are also being planned in over 60 Russian cities from Saratov in the south to Siberia. Pro-Kremlin rallies are also being organized and many fear a broader crackdown is imminent.

The mood has shifted dramatically in Russia over the last year. Opposition movements from the Defenders of the Khimki forest to RosPil, Navalny’s anti-corruption whistleblowing website, have gained large followings. At the same time Putin’s seeming invincibility has begun to fade. (However, he remains a popular political figure in Russia. Recent figures from the independent Levada Center show him with roughly 60 percent support, a number just about every international leader would envy.) His announcement in September that he would run for president next year, though hardly a surprise, was met with a growing sense of fatigue and frustration. The very real prospect of Putin remaining in power for another 12 years—he can run for two consecutive six-year terms—has simply emboldened the opposition.

Rather than accept the deal struck between Medvedev and Putin and offered to the people as a kind of fait accompli the Russians are voicing their discontent. What seemed to be just a lot of online chatter in recent months has suddenly spilled into the streets.

“This new protest wave is by no means limited to opposition parties,” wrote Yevgenia Albats, editor of The New Times, an independent monthly news magazine. “It has drawn in young people, who used to have little interest in politics. When the Medvedev-Putin tandem decided in September that the prime minister would become president and vice versa, young people were deeply offended that their opinion was not solicited. All at once, a generation understood it had two options: to leave the country, or to start the struggle.”

Young people have not only been offended by the ruling tandem’s top-down decision but by the way the authorities have attempted to control public discourse. The Internet has largely been an open and unregulated space in Russia. Bloggers don’t face the same kind of scrutiny or legal restrictions imposed on mass media. Even before the election, videos of outright bribery—buying votes—were posted and widely circulated online. On Sunday, evidence of ballot stuffing and literally hundreds of cases of electoral fraud were captured on cameras and smart phones and beamed around the country. So when United Russia received a disappointing fifty percent of the vote—what the Kremlin may have assumed would insulate them from allegations of fraud—people didn’t buy it. They could see for themselves that the vote was rigged and, in all likelihood, the party in power had received far less support.

At the same time a coordinated Distributed Denial of Service (DDoS) attack on several websites—most of them in some way affiliated with the opposition, from the liberal radio station Echo Moscow to the independent election monitoring organization, Golos—was viewed as being launched by United Russia. “The attack on the website on election day is clearly an attempt to inhibit publication of information about violations,” Echo Moscow editor-in-chief Alexei Venediktov wrote on Twitter. So the elections turned into a double affront: the vote was stolen and one of the few public spaces available for open discourse sabotaged.

It’s unclear where Russia’s opposition movement is headed or how the authorities will respond to sustained protest and growing public frustration, especially in the run-up to presidential elections in March. Former Soviet leader Mikhail Gorbachev has called for a re-run of the elections, which he has said “do not reflect the people’s will.” Meanwhile Navalny, the popular blogger and opposition figure who has made his political ambitions clear, was among those arrested Monday night and sentenced to fifteen days for defying a government official. News of his arrest spread quickly and by the early hours of the morning thousands were watching a live video feed of protesters demanding that he have access to a lawyer. In Russia, it seems, defiance is no longer limited to the relatively safe precincts of the web.

What good are elections in East Africa?

Mandela: A reflection from South Africa

Russia on the brink?