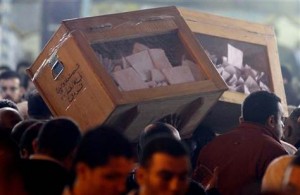 Egypt began its first round of balloting in November, one of the outcomes of the January uprising that ousted the dictatorship of Hosni Mubarak. This followed the military’s attempt to hold onto power by using draconian measures against renewed protests in Tahrir Square, where military and police killed 40 and injured 2,000. With two more rounds of voting remaining, it is small wonder that many Egyptians are afraid of what is to come. Early indications are that the Muslim Brotherhood will show well in free parliamentary elections, and the more doctrinaire Salafists will claim seats. Debates over the prospects for the Arab Awakening now rage as a result.

After a spellbindingly rapid series of events in the Middle East in the early months of this year, progress seems to have slowed. The liberal spirit that characterized those nonviolent revolutions appears to be dissipating in favor of old rivalries—as well as the specter that new forms of repression will simply replace their predecessors.

What’s happening now in Egypt and Tunisia—to say nothing of Bahrain and Syria—is also bringing back to the fore worn-out arguments claiming that nonviolent struggle works slowly, while violence is quick. Efficient, even.

This kind of argument is often given as a justification for not taking the time to investigate or learn how to fight with nonviolent struggle. I have heard this view advanced by communists, Baathists, Marxists and radical proponents of armed struggle, despite the fact that, until recently, few empirical evaluations have been conducted to determine whether it is actually true. Considering that Gandhi confronted the British for 25 years after he returned home to India in 1915, and the U.S. civil rights movement took a full decade between 1955 and 1965 to realize legal protections for equality in public accommodations and elections, I can see some anecdotal basis for such scorn.

Yet the past 40 years have seen momentous developments in our comprehension of nonviolent strategic action. Not only can it achieve major political objectives, but it can lead to more stable and equitable long-term results that benefit all parties to a conflict, improve the odds for reaching negotiations, and lay the groundwork for reconciliation. Even so, much of the research has focused on the actual conflict with an oppressor, as opposed to what might follow it. In the Arab world, relatively little information has been available concerning the next steps in moving from dictatorship to democracy. Still, it is clear enough that some seeds for democracy are actually embedded in the practice of nonviolent conflict itself. And, truth be told: this can be slow.

My own experience working for four years at the heart of the Student Nonviolent Coordinating Committee (SNCC) in the U.S. civil rights movement suggests some reasons for why nonviolent struggle might help in the formation of democratic institutions. One of the first objectives of a nonviolent mobilization must be the building of unity. Rarely does a state of unity pre-exist; it must be created in order to succeed, and this requires some form of democratic decision making.

Although this point requires more study, my personal experience suggests that the process of making decisions is one of the most important keys to unlocking the intriguing tendency of nonviolent movements to yield democratic formations. In SNCC, we tried to make all decisions by consensus—something in the news earlier this autumn with the Occupy Wall Street movement. The achievement of consensus, however, is far from simple. In SNCC it meant discussing a matter and reformulating it until no objections remained. Everyone and anyone present could speak. Participants included those of us on staff (a SNCC field secretary was paid $10 weekly, $9.64 after tax deductions), but, as time went on, an increasing number of local people would participate as well—individuals whom we were encouraging and coaching for future leadership. Our meetings were protracted and never efficient. Making a major decision might take three days and two nights. This sometimes meant that the decision was in effect made by those who remained and were still awake!

When building a nonviolent movement, one cannot order another to take a public stand or break the law. Individuals must decide for themselves whether they are ready to make the sacrifices entailed and pay the penalties that civil disobedience requires. The experience of making such profound decisions, both individually and as a group, cultivates democratic skills and an expectation of participatory processes in future governance. This phenomenon isn’t found in movements that rely on violent tactics.

One of the most thought-provoking findings in Erica Chenoweth and Maria J. Stephan’s new book, Why Civil Resistance Works, is its substantiation of an idea that first struck me years ago. While working, teaching and researching in different parts of the world, I’ve looked in vain for examples in which armed struggle or guerrilla warfare led to democratic outcomes, all the while encountering ardent defenders of the refrain that what is taken by violence must be retrieved by violence—including freedom or democracy. I heard this time and again in Africa, the Middle East and elsewhere. I didn’t, however, see evidence of its validity.

What Chenoweth and Stephan found is that approximately one quarter of the violent insurgencies that they studied across the period of 1900 to 2006, and which ultimately captured power, succeeded. This was, however, a much lower rate of success than for nonviolent campaigns. Moreover, they write, the “conditions in these countries after the conflict ended have been overwhelmingly more repressive than in transitions driven by nonviolent civic pressure.” Remarkably, even the long-term effects of failed nonviolent campaigns are more favorable to democracy and peace than the long-term results from violent insurgencies. In their data concerning 218 violent insurgencies since 1900, democratic governments resulted perhaps 5 percent of the time. In fact, they say that none of the countries that experienced primarily violent uprisings can today be categorized as democratic. Their data show that the stronger and more cohesively the nonviolent civic coalition operates in societies during the years immediately preceding a democratic transition, the more it leads in the direction of freedom and democracy. As far as the rapidity of violent insurgencies, their data show that they retard democracy while speeding the process and likelihood of a return to civil war.

In the western hemisphere we have a good example of how mobilizing and sustaining a popular movement of nonviolent action may go hand in hand with forming civil-society institutions and sustaining democracy: Chile. The “days of protest” that started in 1983 forced General Augusto Pinochet to concede ground to a nascent opposition. Mild concessions brought about what the Chileans termed an “opening,” and as the 1988 plebiscite on his presidency approached, Pinochet yielded still further to the pro-democracy movement to make the vote appear fair and enhance his international standing. The whole process took years for Pinochet to hand power to a democratically elected president in 1990, but since the end of the Pinochet dictatorship, the country has sustained a robust process of economic, social, and political reconstruction.

Today, fears for the outcome of the Arab Awakening often derive from the uncertainties facing countries where a coherent and coordinated quest for democracy had long been impossible. Tyrannical leaders and their international sponsors and allies wanted weakened civil societies that could not check their power.

It is extremely doubtful that political, economic and social conflicts in the region will disappear. Yet how people engage with each other in the presence of discord can change. What has been accomplished by the pro-democracy movements in the Arab world is no trifling matter. For instance, former U.S. First Lady Rosalynn Carter reported of the October elections in Tunisia, “This was as peaceful and calm an election as I have ever observed.” However slowly, and through whatever difficulties, there is little doubt that the Middle East is being transformed for the better. And the new leaders will learn that, should they fall short, nonviolent uprisings can recur on their watch.

The short and the long of creating democracy