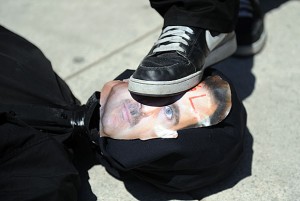 As chants of “Al-shaab urid iskat al-nizam” (“the people want to bring down the regime”) rise, so, too, does the hailstorm of bullets. As people come out into the streets to express themselves, so, too, do the tanks. Syria’s revolution is entering its ninth month, the Assad regime uses familiar tactics in its attempt to crush dissent. There is nothing creative about deploying tanks and snipers to villages. There is nothing creative about using rape as a tool of war, especially against an unarmed population. In contrast, however, the Free Syria movement has responded to these assaults with amazing creativity. Syrians continue to take to the streets in peaceful protest against the Assad regime—every day, in nearly every city, in nearly every village.

Being creative takes work. Nonviolent creativity, especially when faced with live ammunition, takes steely willpower and a fierce commitment. Syrians have demonstrated both as they slowly but surely rid themselves of a regime that thinks nothing of using rape as a tool of repression, dismemberment as a message, or kidnapping as a reminder. That the protests have remained largely peaceful is awe-inspiring; that Syrians are so creative under these circumstances is astonishing.

Activists both in Syria and abroad collaborate via Skype, Facebook, and Twitter to make their voices heard without resorting to violence. The results are inspiring: a laser shines a green beam across Damascus and onto the Presidential Palace. Activists in Homs—the city with the best sense of humor—videotape themselves launching eggplant grenades. They yell, “We are your armed gangs!” and hurl zucchinis at the oncoming armed security forces. Hundreds gather in a main square in Bayada, Homs, and lay on the ground, motionless. In unison, they begin to whisper “Al-shaab urid iskat al-nizam.” As they rise slowly, so do their voices—until their shouts to topple the regime become a deafening roar.

And then there are the names they choose for the major days of protest. Friday, December 2 was known as the “Friday of the Buffer Zone,” when protesters were calling for the international community to create a buffer zone or humanitarian corridor to protect unarmed civilians from the regime’s military and armed thugs. A few weeks ago, protesters named the day “Your Silence is Killing Us” in response to the Arab League’s inaction on Assad’s brutality toward unarmed civilians. The named protests carry the Syrians’ messages to the world. To decide on these names, several ideas are proposed on a Facebook page and everybody—in Syria and abroad—gets to vote. The most popular name is then selected and communicated all over Syria. Welcome to democracy! For most Syrians, this is the first time they have been able to participate in a free and fair election.

Another example is general strikes. Students went on strike about a month ago in response to a new Assad “reform” measure under which failing students would be allowed to pass their courses. Elementary, high school and university students went out in protest, chanting, “No school until there’s no Assad.” Last Thursday, notices went out to Syrians via Twitter, Facebook and Skype, and from there, hushed whispers across entire communities, to declare a general strike. As it turns out, it is now illegal to be on strike—in other words, to stay at home—in Assad’s Syria. Being outdoors, however, carries its own deadly risks—whether from the tanks positioned at the entrances of every city, or the snipers tending their posts on rooftops.

Finally, Syrian activists abroad are taking bolder steps to assert their independence from the Assad regime. In Libya recently, activists hoisted the Independence Flag over the Syrian Embassy in Tripoli. In Cairo, a huge poster of Assad was placed in the street so that motorists could drive over it. During a recent protest in Washington, DC, horse manure was spread on a portrait of Assad. Syrian-Americans proudly snapped photos and immediately shared them with their friends and family in Syria. In Mississauga, Ontario, Syrian-Canadian activists conducted a flash mob at a popular shopping mall. At a designated time, all participants “froze” while watching YouTube videos of protests in Syria, while holding up Free Syria flags, and while displaying banners detailing the number of massacres that day.

These nonviolent expressions, taken widely as flagrant disrespect of Assad, would have been unthinkable before the revolution.

Rafif Jouejati is a spokesperson for the Local Coordination Committees in Syria.

Syrian women organize for security, one tent at a time

Prospects for revolution in Africa’s 55 countries

The Syrian resistance’s monopoly on creativity