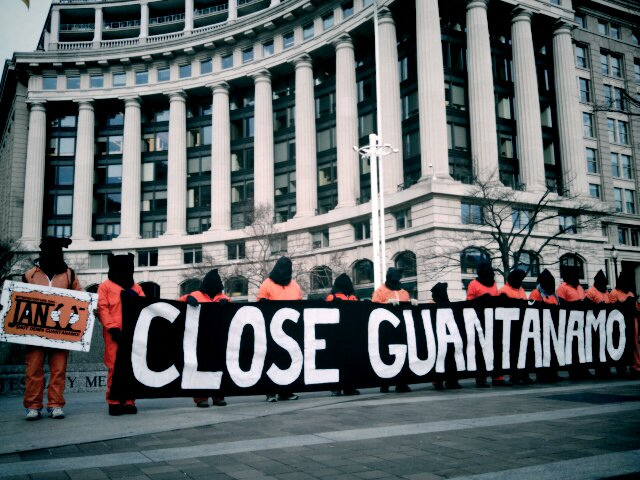 The defendants file in—some looking neat and upstanding, some in their best approximation of the same. They all look tired. Sleeping on the floor of a church can do that to a person.

The white haired, slightly amused and always alert judge, the white noise machine when the lawyers confer with the judge, the stern and fit marshals, the wall to wall carpet and wood paneling. Yes—we are in a DC court. Take off your hats, gentlemen and ma’am, no knitting allowed in the court.

The matter before the court is unusual. The defendants are representing themselves, with legal advisors on hand. They stakes are high—if convicted, they could face up to a year in jail.

On June 23, 2011, a day the House of Representatives was scheduled to debate provisions that would eventually become the National Defense Authorization Act just signed into law by President Barack Obama that included a measure to strip funding from any efforts to repatriate Guantanamo detainees, fourteen activists stood one by one and addressed the men and women elected to represent their interests. Here is part of what they said:

Today the House of Representative is in the process of contemplating not the passage of a bill but the commission of a crime. Provisions in the proposed Defense Appropriations Bill grant the United States powers over the lives of detained men fitting of a totalitarian state that uses the law itself as an instrument of tyranny. The law would make the prison at Guantanamo permanent by denying funds for the transfer of men to the United States, even for prosecution in civilian courts.

Spread throughout the Gallery, the fourteen were able to complete their statements before being led away by Congressional guards. Many of the Representatives on the floor listened intently, while others jeered derisively. Everyone within hearing range understood that the activists were objecting to the continued abuse and detention of men at Guantanamo—many of whom have been cleared for release under President George W. Bush and President Barack Obama and continue to be held largely because of the political cowardice of Congress.

Only four completed the trial. The government failed to identify the other ten. One of the ones who went through the trial was Shakir Ami aka Brian Hynes.

Shakir Ami is not a name you hear every day in DC court. It is not exactly right, either. But its genesis is in an action Witness Against Torture did a few years ago at the Supreme Court, when 80 of us occupied those hallowed halls—shutting it down for (what we think is) the first time. None of us brought identification, opting to go through the system with the names of men at Guantanamo.

Thus, we symbolically brought them into the U.S. court system. For most of us, it meant just a very long processing through the DC jails and an opportunity to say the name of “our” defendant in a court of law. For some men at Guantanamo, it was the first (and some perhaps only) time their names were heard in the U.S. justice system. For Brian Hynes, it meant more—the correctional officers who processed Brian misspelled and garbled Shaker Aamer, rendering it Shakir Ami—but the symbolism remains striking and is pervasive. In the DC system, Shakir Ami is Brian Hynes’ alias and every time he is arrested, he’ll have an opportunity to talk about Shaker Aamer.

Aamer remains at Guantanamo. He is the last remaining British resident at Guantanamo. The rest were released years ago and have made documentaries, written books and become active in the international movement to shut down Guantanamo. Aamer is an educated man, born in Saudi Arabia but a legal resident of the United Kingdom who is married to a British national. He had been in Guantanamo for nearly ten years, and from early on was a leader amongst the prisoners, encouraging them to demand better conditions and organizing protests and hunger strikes in response to abuses. For this leadership, Aamer has been singled out for harsh treatment and remains in solitary confinement. In September, the BBC reported that Aamer was on hunger strike and being forcibly fed through a tube. In a letter quoted in the article, Aamer wrote that:

Inhumane treatment is taking place at the [Guantanamo] hospital among other areas, especially affecting the sick and those who are on (hunger) strike and our deprivation of real treatment, health, diet and appropriate clothing which are not provided to us, nor we are allowed to provide them for ourselves.

Shaker is the father of four. His youngest son Faris was born after he was in Guantanamo. They have never met or touched. Shaker was cleared for release from Guantanamo by the U.S. government in 2007, and yet he remains in Guantanamo.

None of the details about Shaker Aamer were admissible in the trial. Brian Hynes was interrupted and silenced every time he mentioned Shaker’s name. But the facts of Aamer’s case bear repeating as President Barack Obama used the New Year’s holiday to sign into law the National Defense Authorization Act, a piece of legislation that codifies into law a set of dangerous and controversial policies and protocols that have evolved over the last ten years of the global war on terror.

In response, the Center for Constitutional Rights wrote that it:

strongly condemns the U.S. Congress for passing, and President Obama for signing, the 2012 National Defense Authorization Act (NDAA), which effectively endorses war without end and makes indefinite military detention without charge or trial a permanent feature of the American legal system. This is the first time since the McCarthy Era that Congress has written indefinite detention into law.

We had hoped that President Obama—a constitutional law professor and believer in the aspirational course of American justice—would uphold his promise to veto this radical law that threatens to roll back both decades-old legislation enacted to combat McCarthy-era excesses and 19th-century limitations on domestic military policing. At the same time that heroic activists in the Arab world are risking their lives to rid themselves of the remnants of their authoritarian and militaristic regimes, the United States is embracing practices contrary to the basic aspirations of any constitutional democracy.

Brian Hynes and the three co-defendants rested their case on Wednesday. On Thursday they were found guilty. On Friday, the judge sentenced Mike Levinson to two days in jail and then suspended it, gave him 6 months unsupervised probation, told him not to engage in illegal activities on Capitol grounds or buildings for 6 months, and—in lieu of a fine—granted his wish to make a $150 charitable contribution to the organization of his choice. The rest of the defendants will be sentenced on Thursday, January 12.

This is not the end. It is the beginning. Opposition to the NDAA is coming from all quarters, and manifesting itself in flashmobs in Grand Central, arrests at the White House, and trials in Superior Court.

Our work continues in DC, as Witness Against Torture’s Hungering for Justice fast enters its fourth day and we gear up for “Ten Years Too Many: National Day of Action Against Guantanamo” on January 11.

We only wish the real Shaker Aamer and his family could join us.

Combating online abuse with the principles of nonviolent resistance

A Guantanamo prisoner has his day in court

For Black Lives Matter protesters, there are no days off