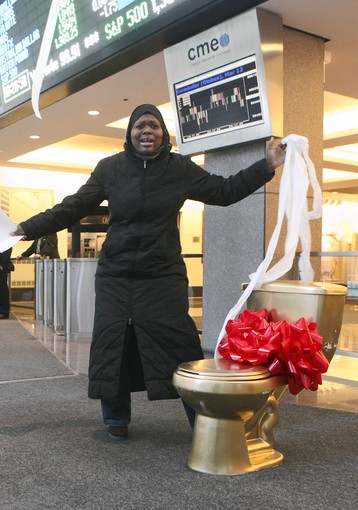 Stand Up Chicago—a coalition of labor and community groups working to “reclaim [tax] funds for meaningful job creation and investment in strong schools and communities, to secure a brighter future for Chicago’s working families”—invited Chicago’s wealthy elite to take a seat on the golden throne—that is, a toilet.

The coalition awarded the golden toilet to Terrence Duffy, Chairman of the Chicago Mercantile Exchange (CME), as a way of protesting the CME’s recent gift of $109 million from Illinois taxpayers. Close to a hundred Chicagoans—each representing one of the millions that the CME received from city and state tax breaks as well as TIF funding for bathroom renovations, a new fitness center, a cafe, and state-of-the art audio-visual conference room at the Chicago Board of Trade—presented Duffy with the gift and asked for a meeting with him.

Shani Smith, a working-class mother from the Calumet Heights neighborhood of Chicago, was one of the spokespersons at the event. In an interview with her afterwards, Smith said that she finds herself “between unemployment and under-employment” while social services and education services are being cut in her neighborhood. “Meanwhile, [the CME] is recording record profits at the expense of the taxpayer. We want to send a message: We want some of our money back! Our neighborhoods desperately need it.” Smith, whose home teeters on foreclosure, thought the action was spectacular and had powerful visuals. Indeed, the toilet is a creative and humorous piece of protest—reminiscent of Otpor’s famous Milosevic whack-a-barrels.

The diverse group, representing neighborhoods all across Chicago, was unable to meet with Duffy, but the golden toilet—complete with a big red bow—was left in the lobby with the hopes that it would be installed as part of the luxurious renovations and used by the executives. Catherine Murrell, an organizer with Stand Up Chicago, does not think their chances of getting a meeting with Duffy are high. “The CME is not concerned with us,” she added.

The golden toilet action is one of many that Stand Up Chicago has organized in the past years to draw attention to corporate welfare. Murrell also said future actions were being planned around April 17—tax day. But Stand Up Chicago is doing more than just raising awareness. The coalition, together with Chicago Political Economy Group (CPEG), commissioned and published a jobs plan—”Investing in Chicago Communities: A Jobs Fund for a Future That Works“—that could create up to 40,000 Chicago jobs. And where would the $1.4 billion needed for these jobs come from? Well, by asking the CME to pay $0.25 per transaction on high risk speculation on derivative trading. The average worth per trade: $233,000. That’s right, a mere .0001% per derivative transaction—twenty-five cents—holds the potential to transform the prospective outlook for one in every six of Chicago’s unemployed.

These kind of protests, which capture the attention with dramatic and humorous action, open space for more serious kinds of conversation. Stand Up Chicago is doing just that. Their Chicago Community Jobs Plan is meticulously well-researched and comes out of grassroots canvassing of various Chicago neighborhoods to find out what the struggles and needs of ordinary Chicagoans are. While City of Chicago Mayor Rahm Emanuel and the State of Illinois legislature continue to provide corporate welfare at the expense social welfare, the mysteriousness of corporate finance is being demystified and made digestible to the people by civic action and popular education. The solutions are out there and more and more activist groups are beginning to grasp and promote them with real authority and with expanded partnerships, like that between Stand Up Chicago and CPEG, and the excellent, and realistic, report they produced.

UPDATE: Some good news!  Protest works.  A week following Stand Up Chicago’s creative “golden toilet” action protesting controversial tax breaks and TIF funding awarded to the Chicago Mercantile Exchange (CME) for luxury renovations, the CME–along with two other companies (CNA Group and Bank of America)–have agreed to give back $34 million in tax breaks to the City of Chicago.

Both the CME and Bank of America have been targets of political and economic protests in Chicago in past months.  While it is difficult to substantiate quantitatively this victory for people’s movements, it is certainly worth celebrating and should be considered an affirmation of Stand Up Chicago’s work (as well as their allies like Occupy Chicago and others).

What does it take for activists to get your attention?

Beautiful Trouble’s guide to wining the numbers game, defending democracy and challenging business as usual to build the future we deserve.