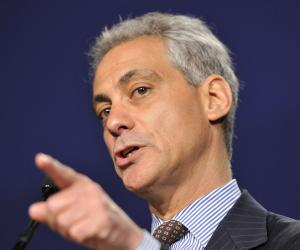 Chicago Mayor Rahm Emmanuel, who has been dubbed “Mayor 1 Percent,” got mostly what he wanted.  The “Sit Down and Shut Up” ordinance that Emmanuel legislated in November just passed the City Council.

Members of Occupy Chicago and other groups protested the draconian law that further criminalizes dissent by making protest more costly and more restricted for citizens.

Emmanuel, using the upcoming NATO-G8 summit that is set to take place in Chicago this May as an opportunity to foment fear of protesters, used the legislation to limit access to public parks and beaches, increase the costs and requirements for obtaining permits, and give unilateral power to himself and Chicago Police to quickly deputize law enforcement officers and obtain special equipment for dealing with protests.

Initial proposals in the ordinance to increase minimum fines for obstructing or resisting a police officer from $25 to $200 and maximum fines from $500 to $1000 were not a part of the final bill—in large part due to the massive outrage from civil liberties and social justice groups in Chicago.

Nonviolent social movement organizations will have to think creatively about how these changes will effect their activism. Activists who have long been accustomed to small fines and convivial police may have to consider further acts of noncooperation that may include jail time for refusal to pay fines that they consider unjust.

Solidarity across issue-based groups and solid organizing may be the best way to make the enforcement of these laws untenable. If protesters refuse to pay the fines and force judges and the city to fill the jails, history has taught time and again that an unsustainable situation is created for the power holders.

So long as protesters are willing to suffer the hardships and inconvenience of noncooperation and jail, thereby gaining sympathy from the wider public—a hallmark of Gandhian nonviolence that the Civil Rights movement extolled–the City of Chicago may be forced to re-evaluate its position.

After an assassination, the world stands in solidarity with the Zapatistas

Nigeria’s #EndSARS movement has suspended protests, but vows to come back stronger

Sit Down and Shut Up: what price will we pay?