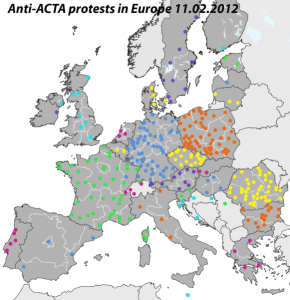 ACTA, or the Anti-Counterfeiting Trade Agreement, has united hundreds of thousands of people around the world in protest, both on the Internet and in the streets. Across Europe, activists in more than 20 countries called for a day of action on February 11, demanding that this treaty—which would set new international standards for intellectual property controls—not be ratified by the European Parliament.

Although the numbers in the streets on Saturday were larger than some past protests against ACTA, poor weather meant that there were fewer than organizers hoped. 300,000 people were expected to take part throughout Europe, but the total number was probably only a third of that—including just 8,000 people here in Romania. The protests also failed arouse much interest in the media. The next day of action has been scheduled for the 25th of February, which may be enough time for more people to become informed about the issue and for the weather to clear up. Organizers, in any case, are confident that the treaty will not pass, that they will not be forced to give up their virtual freedom.

Those opposed to ACTA believe that its provisions—from further policing people’s behavior on the Internet to banning generic drugs—will have chilling effects on civil society everywhere. It seems to them a high price to pay to protect the profits of the relatively small number of multinational corporations that stand to benefit.

When the negotiations for the treaty took place between 2007 and 2010, furthermore, there was little opportunity for public comment, and its framers were not democratically-elected officials. Zuzana Roithova, who represents the Czech Republic in the European Parliament, went so far as to say back in June, “The European Parliament has had no representation in ACTA negotiations.” A statement from Reporters without Borders added, “It is extremely regrettable that democratic debate has been eliminated from talks that could have a major impact on such a fundamental freedom as free expression.”

Among the Romanian organizers—who include activists, artists, students and computer programmers—the goal has been to create a protest that is above all creative, contrasting the potentially stifling effects of the treaty with the creativity of a culture based in a conception that a society’s intellectual property should be shared. Anti-ACTA parties were organized in Bucharest and Cluj Napoca, at which people drew banners, created plaques and held brainstorming sessions about how to make the protest more interactive. Organizers uploaded photo and videos on a memory stick, strapped it to a carrier pigeon and released it at the start of the protest as a symbolic gesture. After protesting in Bucharest’s main square for about six hours on Saturday, a march headed toward the nearby historic center of the city, where most of the pubs are located, to try to convince as many people as possible to join them.

In places where such protests have taken place, politicians have showed signs of being willing to listen. After protests on January 25 in Poland, Polish leaders announced that they wouldn’t allow the treaty to be signed in their own country’s parliament. Much the same thing has happened in the Czech Republic as well. On this issue, at least, those in power in Europe seem to be willing to respond to popular protests.

Alexandru Predoiu is a student at SNSPA (National School of Political and Administrative Studies), currently finishing the last year of his masters program. He is studying the effectiveness of nonviolent actions applied in democratic countries and has been a long-time activist for different human rights watchdog groups. He is presently trying to establish the first training program in Romania that offers activists the knowledge to use nonviolent actions in order to obtain what they want.

Students assert their ‘right to dissent’ in India

How will the Bergdahl-Taliban prisoner swap impact Guantánamo?