In the midst of the excitement that continues to surround the Occupy movement, it can be unfortunately easy to forget that occupations tend to be anything but empowering. Creativity and imagination often fall by the wayside when the struggle of daily life becomes the main focus of thought. Yet it is those very positive traits that lead to liberation.

Last summer, while traveling in Paris, I met a Palestinian playwright named Abdelfattah Abusrour, who has made it his life’s mission to inspire the imaginations of the young people living in refugee camps in the West Bank. He runs a cultural center in Bethlehem’s Aida Camp called Al Rowwad (which is “pioneer” in Arabic), where children are taught, what he calls, “beautiful acts of resistance.”

Shortly after seeing him perform with his adult troupe–several members of which have been with Al Rowwad since they themselves were children–I sat down with Abusrour to get more of his story, which can now be read in the current issue of The Progressive. Here is just a quick excerpt: 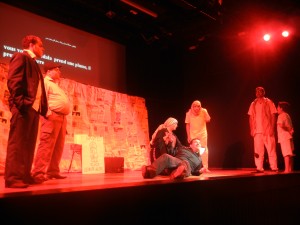 Just moments after performing a dramatic final death scene, Palestinian playwright Abdelfattah Abusrour was back on stage delivering an afterword that was no less intense. Speaking softly, Abusrour told the small Parisian audience about his work back home in Bethlehem’s Aida refugee camp where he grew up and now runs the Al Rowwad Cultural and Theater Training Center.

“We are a beautiful people and we want to show our humanity to others, as well as ourselves,” Abusrour says. “We need to see beautiful acts of resistance. It’s not always linked to blood and martyrs and destruction.”

For Palestinians like Abusrour, who lived the hardships of occupation, resisting isn’t the question. “To exist is to resist,” as Palestinians often say. The question is how to resist.

“I firmly believe that nonviolence as a strategy will win,” he says. “And the way to do it is through building this culture of people who think they can create a world based on nonviolence and the strength of people power.”

To read the rest of the article, visit The Progressive‘s website or, better yet, buy a copy. And if you are interested in hearing more about Abusrour’s work,  you may get the chance to see him in person, as he will be visiting U.S. cities in April and May to raise international support for Al Rowwad—more info on that, to come.

How to counter Trump’s efforts to reduce outrage

Brooklyn stands up for trans women of color

Beautiful acts of resistance in Palestine