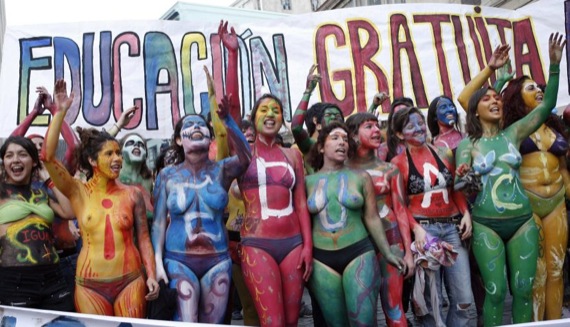 After a storm comes the calm. Following eight months of struggling to roll back the privatization of education in Chile, the various organizations representing the Andean country’s student movement are now in a temporary and strategic withdrawal as they plan to impact the political system more directly. This year, they will not solely oppose the lack of public funding for education, but a whole political structure that they view as serving only a few.

The students have made clear that the spirit of civil resistance in Chilean society survives after the popular movement that defeated Augusto Pinochet. The persistence of the movement has already led to a re-distribution of power within President Sebastián Piñera’s cabinet, which students accused of acting like a continuation of the Pinochet regime, intensifying privatization and increasing the socioeconomic gap within the population. The government increased its 2012 budget for education by 10 percent, to $1.2 billion; this includes an increased number of scholarships for high-achieving, low-income students by 24 percent. The government also made the system of credit more flexible for students and cut interest rates on student loans.

Still, President Piñera’s approval ratings suffered a tremendous fall, ending the year at 23 percent, while the student movement’s registered at 89 percent. Piñera tried to gain international sympathy at the General Assembly of the United Nations in September last year by applauding the student movement as a “noble, big and beautiful cause,” but his rhetoric has not been enough to convince many Chileans.

Over the past year, the student movement distinguished itself by refusing to align itself with any political party, especially leftist parties that could tarnish its aims with co-option and compromise. This decision increased the diversity of participants. The Chilean students also distinguished themselves in the creative direct action they’ve used both to excite the public imagination and to distance themselves from the establishment.

Conscious of the state’s repressive potential, organizations like the University of Chile Student Federation raised awareness about the necessity of avoiding violent actions in order to strengthen the effect of their efforts. They knew in advance that media coverage would focus on anything perceived as violent, thus driving national and international attention away from their real objectives. Although there were few violent clashes between riot police and the protesters—in May, August and September—the movement still acted in such a way that the police had to accept responsibility.

When violence did begin to break out, the students kept calling for one another to respond by acting creatively. In July, they gathered in front of La Moneda Presidential Palace for a kiss-in that lasted 1,800 minutes—the same number of millions of pesos that they want to see invested in public education. In June, around 3,000 students danced to Michael Jackson’s “Thriller.” Each carried a gravestone with his or her name, profession and amount of student debt written on top.  After that, it became almost common to see students doing choreographed dances in the streets while wearing superhero costumes. One of the bigger dances happened in July, when the Minister of Education Joaquin Lavin was removed from his position.

By August, the government stepped up its crackdown, and students were shot with guns and chemical spray. Their usual reaction, though, was to organize another protest; at night, they got people all over the country to bang their pots and pans, just like the “call to the streets” that they used to do during the Pinochet regime, a tactic called cacerolada.

Meanwhile, the numbers and diversity of participants progressively increased. What started as a student movement of 15,000 students in May was later joined by miners, labor unions, professors and parents. The headquarters of two main leftist parties—the Democratic Independent Union and the Socialist Party of Chile—were occupied on June 30, bringing in students from the private universities, making the numbers surge closer to 400,000. Later in September 22, and given the tiredness after months, there were 180,000 protesters in the 35th mass meeting. There have been some well-known names in the movement, like Camila Vallejo, Ariel Rusell, Julio Sarmiento and Giorgio Jackson. Despite their frequent public appearances, however, they always remained amongst the other participants as no more than spokespeople, avoiding any official leadership role.

The winter’s temporary withdrawal has given the students a chance to reflect on and evaluate their previous tactics. The challenges in the coming months are clear: the movement has to be stronger at the local level and to win over more current political actors while also producing some of their own. It has to ensure that Chileans come to think of affordable education as a common interest and a public good, rather than something to be bought and sold. When everyone has access to educational opportunity free from crippling debt, the whole society benefits.

This weekend, a one-stop-shop to militarize your town