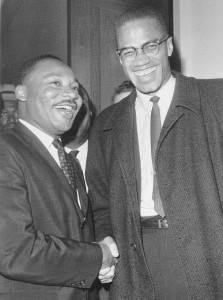 The headline in the Philadelphia Inquirer told us last week that, on the other side of the country, a brick hit a police officer in Oakland and sent him to the hospital. Civil Rights organizer Jim Bevel predicted headlines like this in the ’60s when arguing about the then-current version of “diversity of tactics.” He said something like: “We want people to talk about our issues, about the suffering of our people from racism and poverty. When you throw the brick, people don’t talk about our issues, or the thousand black people on the streets that day, they talk about the police officer who was hit by the brick.”

The question for all those, whether using black bloc tactics or not, who consider adding to the Occupy movement tactics of either property destruction or violence: Do you want the issues of injustice to be talked about, or your bricks? In my own definition, property destruction is not the same as violence—there can be very significant differences between the two. But in this historical-political situation, the impact of either is similar; they give an easy out for people who don’t really want to talk about injustice.

I don’t, however, recommend Chris Hedges’ recent essay, “The Cancer in Occupy,” as a model for how to respond to the black blocs. Demonizing, calling people names, using the giveaway metaphor of “cancer” (I’ve had cancer) is about as far away from effectively opposing a tendency one disagrees with as it’s possible to get.

We have such good models in the tradition of nonviolence. Dr. King, James Lawson, John Lewis and so many others in the Civil Rights movement who had to respond to those willing to advocate violence showed us how to do it. They were themselves mentored by people like A. J. Muste whose largeness of spirit in dealing with defenders of violence went all the way back to the 1919 Lawrence, MA, textile strike.

Dr. King, for instance, famously had a public dialogue with Malcolm X, and I myself was involved in a radio broadcast debate between Malcolm and Freedom Rider Albert Bigelow. But less well-known to the public were the thousands of hours spent by SNCC and SCLC organizers dialoguing with advocates of violence wherever they found them: bars, pool halls, on the street, in church basements.  Bayard Rustin seemed to have unlimited patience in going into the wee hours of the night over whiskey with black comrades who believed the time had come to include violent tactics. Rev. James Orange, a strongly-built staffer for the SCLC, was given the job in the Chicago campaign of winning over the largest and toughest African-American gang, the Blackstone Rangers; Jim was beaten up repeatedly by gang members to test his courage and sincerity before he was finally led to the gang leaders who agreed, in the end, to join the campaign and be nonviolent “peacekeepers.”

The issue of the appropriateness of property destruction and/or violence is, like any other aspect of community organizing, not settled by blanket statements or posturing but by getting in there and dialoguing, over and over again.  Advocates of nonviolent action need to learn from the Civil Rights movement and the field of community organizing in this way—there really aren’t any shortcuts.

I personally am as furious as anybody about the oppression that’s dealt out by the 1 percent, and my background as a working class gay person give me plenty of stories I can tell about injustice. But my hope for those now devoting themselves to Occupy is to keep your eyes on the prize. We already have in this country the model provided by heroic African Americans of how to stand up to violence—whether from the police or the KKK—in a way that keeps a city’s or nation’s attention on the real issues.

If, in good conscience, you just can’t stand for what looks to you like ineffective nonviolent struggle, then launch your own campaign with your preferred tactics and see how it works out for you. The public debate between Ward Churchill and me might be useful as you think about strategy. And if anyone else would like to debate me publicly on this subject, let me know.

How not to block the black bloc