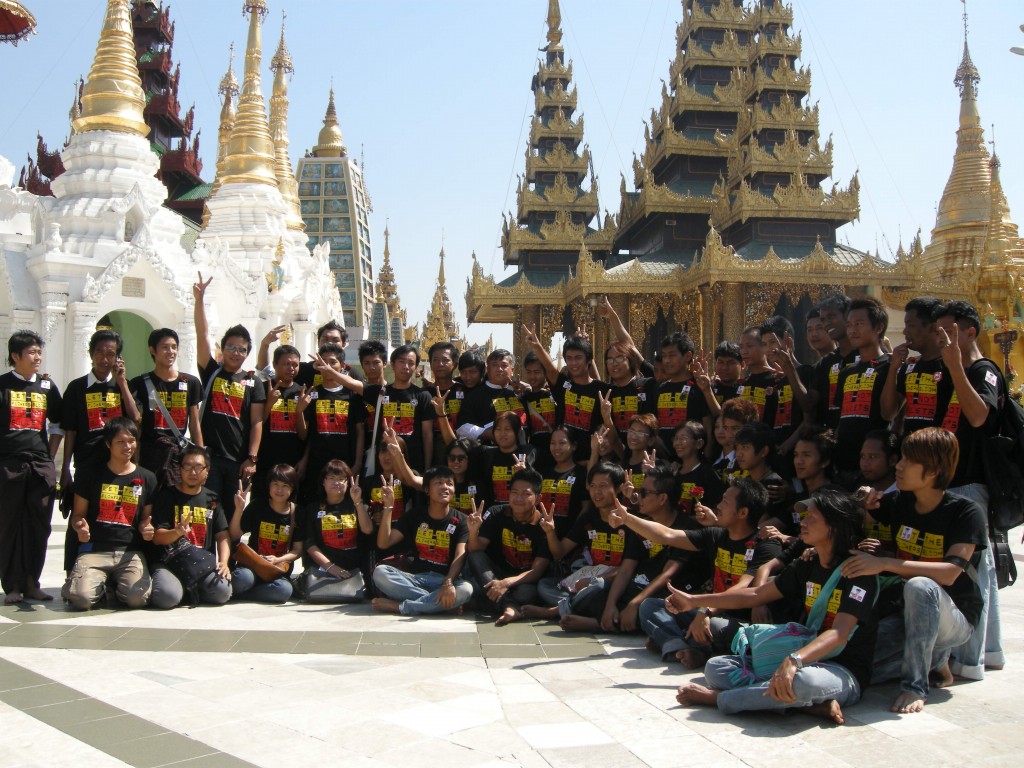 Conflict and abuses against Burma’s ethnic minorities often gets looked over, not just by the international media, but also in Burma’s major cities like Rangoon. In central Burma, the fighting seems like a distant issue. Especially with such acute censorship of the media, the reality of the situation is often misunderstood and underestimated by people living outside the conflict areas.

Generation Wave, an activist group composed of hip hop singers, graffiti artists, poets and other hip urban youth, wants this mentality to change. Peace and an end to militarization not only concerns the Karen, Kachin, Shan, or other ethnic groups, it is something that affects all Burmese people. Last week they staged several actions in Rangoon as part of their new campaign “Let the Flowers Bloom, But Not Bullets.” 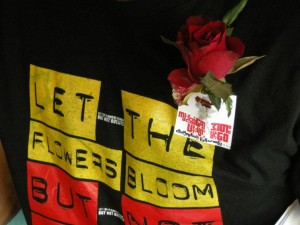 They received support from top activists such as the 88 Generation leaders, as well as some of Burma’s most popular rock stars. Rock singer Aung La and his band Reason supported the Peace Campaign by wearing T-shirts during their Valentine’s Day concert. Generation Wave also did a prayer action at the Shwedagon Pagoda in Rangoon on February 14 and passed out roses, stickers, and talked with visitors. They also worked with the singer Linnith to release a new song calling for peace in Kachin state. (Listen to it here.)

The campaign was received with much popularity, with lots of young and old Burmese sharing the news about the actions. The T-shirts are becoming a real hit with more people wanting to buy them. The Burmese authorities didn’t respond to the action. Instead they have chosen to wait and see what what the next part of the campaign will be like.

Often Burma’s youth have to struggle simply to get an education and find ways to meet their basic needs. It is incredibly inspiring to see young people doing what they can to stand up and promote peace for all. However, the end is hardly near. The conflict is growing in Kachin areas, with the Burma Army is still attacking Kachin Independence Army troops and civilians with the aim of wiping out Kachin resistance. The conflict has resulted in the displacement of 55,000 to 70,000 people in Kachin areas. Another concern is the sustainability of the ceasefire agreements in eastern Burma, as it is yet uncertain how long they will last. Since the agreements were signed there have been reports of the Burma Army moving in troops in Karen areas, continuing to fire mortars and taking food from villagers. The Karen National Union is becoming more skeptical as well, saying that there is not a ceasefire yet and conditions still need to be discussed.

At the heart of the conflicts is the issue of what a unified Burma should look like. Generation Wave’s actions come shortly after February 12, or what is known as Union Day in Burma. It is a day to commemorate the signing of the Panglong Agreement, which 65 years ago laid out the pathway for a federal government in which ethnic groups would have equality and the right to self-determination. This agreement was never implemented. Since then, Burma’s minorities have continually fought for a political system that respects their ethnic, religious, and cultural identity.

It is not common to see Burma’s ethnic majority, the Burmans, take public action for the rights of other ethnic groups, so this new campaign adds hope that Burma’s new generation might be the one to finally heal ties.

“I believe that our campaign could wake the people who are thinking our country has already changed. Actually if there is no true peace there can’t be any development or democracy in this country. So we want to urge people to be involved in the peace process and ensure real change,” says Moe Thway of Generation Wave.

Who really has power in Burma?

A revolution comes in stages — Occupy or otherwise