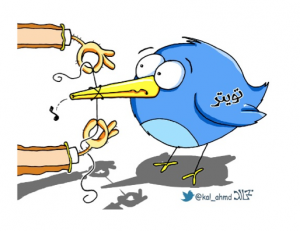 Last month, Internet users and companies rallied together to defeat the Stop Online Piracy Act and the Protect IP Act, two proposed U.S. bills that sought to give media corporations the tools to combat illegal file-sharing but would have potentially had chilling effects on free speech. It was an innovative protest waged almost exclusively online, and American Internet users rightfully celebrated the despised bills’ demises. However, two of the very same companies which pushed hard to maintain a free and open Internet in the U.S. gave indications that they would not do the same for users in the rest of the world.

On January 26, Twitter noted on its blog that, as it expanded overseas into regions with more restrictive Internet policies than our own, it would be willing to censor tweets on a country-by-country basis when requested by legal authorities. This unfortunately-timed announcement, coming on the heels of the anniversary of the start of the Arab Spring protests in Egypt, for which Twitter received much credit for at the time and after, was widely panned. Twitter itself once proudly asserted, “Our position on freedom of expression carries with it a mandate to protect our users’ right to speak freely.”

The example that Twitter provided in its post was mild enough—pro-Nazi content would be blocked only in countries where it is forbidden by law like France or Germany but would be displayed in other countries where it is not illegal—the announcement is clearly aimed at assuaging political concerns from wary governments in places like Saudi Arabia, Turkey and Thailand. Thailand, one of the more heavily censored countries in the world, even officially came out in support of Twitter’s plan, suggesting that the two might “collaborate” in the future.

Though Twitter got slammed by bloggers for this, the announcement was also a victim of bad timing, coming as a startling contrast to the anti-SOPA, pro-free-speech rhetoric still dominating the front pages of tech sites and in the midst of more unrest in the Middle East. In actuality, Twitter already engages in taking down illegal posts (though the ones the company has publicly revealed to Chilling Effects seem to be mostly regarding minor copyright infringement cases) and is merely following a well-established precedent of multinational corporations, even idealistic Internet companies, bending their values in order to enter foreign markets. This is merely a case of moral equivalence, however, and no amount of transparency and good intentions to the contrary should suffice to make it more than that.

In political terms, once a service like Twitter becomes subject to oversight from every government in the world, it is a crippled one. It may continue to serve well as a way to chat with celebrities and trade viral videos, but it no longer will be a tool for free speech and justice. And unfortunately, because of network effects, even if a more open tool designed specifically for political work were released to fill the gap abandoned by Twitter, it would have a hard time reaching out to non-activists. Those who chat with celebrities will remain happily on Twitter.

Twitter has tried to claim that what it is doing isn’t out-and-out censorship. It promises that the company’s take-downs will be merely reactive, coming only after a valid legal request. There will be no blacklists and Twitter will not have a team of censors invisibly scrubbing its site clean of questionable content the way Chinese Internet companies do. However, it isn’t so far-fetched to think of a day when Twitter will be required by law to pre-emptively sanitize its site. In fact, one of the primary “features” of SOPA would have been a requirement that companies actively monitor against copyright infringement, risking an immediate shutdown for any lapses. As Internet scholar Rebecca MacKinnon noted in a recent anti-SOPA op-ed,

Recent academic research on global Internet censorship has found that in countries where heavy legal liability is imposed on companies, employees tasked with day-to-day censorship jobs have a strong incentive to play it safe and over-censor—even in the case of content whose legality might stand a good chance of holding up in a court of law. Why invite legal hassle when you can just hit “delete”?

One of Twitter’s defenses is that all take-downs will be transparent—a sort of checks-and-balances system that in theory discourages those sorts of non-mandatory deletions. Tweets and users will not simply be disappeared; instead, notices will be posted when content has been restricted, allowing viewers to know that content has been suppressed and giving readers the opportunity to verify the legality of the deletion. Of course, users in other countries might be able to view the sensitive material, but what good is that if the content of the tweet—say an announcement of the date and time of a protest—is banned in the only location for which it has “IRL” value?

Earlier in the month, Google also quietly noted that its Blogger web platform would redirect viewers to country specific domain names, thus allowing for similar country-by-country restrictions. Though neither Google nor Twitter mentioned China in their official announcements—Blogger and Twitter have been banned in China in previous years and each company has for the most part given up trying to compete with entrenched local competitors—the specter of Chinese-style Internet regulation obviously hangs over both of their decisions. Artist and activist Ai Weiwei, who resorted to posting to Twitter after his Sina Weibo account—China’s version of Twitter—was censored and shut down, threatened to quit Twitter if the company began censoring. If Twitter moves toward a Sina Weibo model of social media, should other Internet users committed to the cause of free speech quit as well?

‘The means of production’ — free software and Occupy Sandy