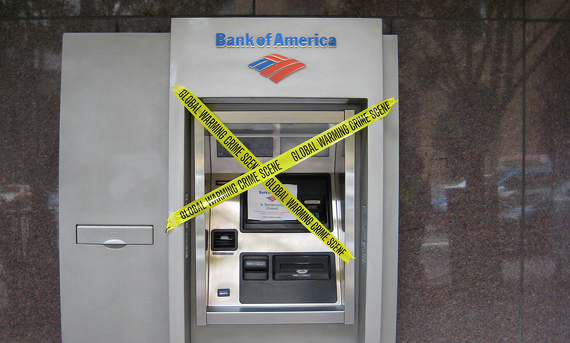 The other day I sat in the living room of a friend’s house painting banners, designing flyers, scheduling nationwide conference calls, planning fun ways to protest—and discussing banks. Actually, it was just one bank in particular: Bank of America. I was at a “work party” for the Fight BAC campaign—BAC is the stock market ticker name for Bank of America—and we were preparing for last Wednesday’s F29 “Shut Down the Corporations” nationwide day of action. As we cheered the launch of fthebanks.org, put the finishing touches on a banner and discussed what we wanted from the campaign, I started having that nagging thought again: Can we really break up the largest bank in the country?

My involvement with Fight BAC began in January. The general idea was explained to me like this: Bank of America is almost totally bankrupt and is probably going to need a bailout sometime in the next year. It is already dependent on taxpayer money. This time around, there’s still time to prevent another bailout. The only way to prevent this from happening is through starting a massive public campaign to create a political climate in which an educated and empowered populace recognizes that this bank has already failed and must be broken apart. If we can pull this off, it would send a signal to the financial industry that it has to start being accountable to the public. From there, we would have a chance to change the whole system.

Instead of focusing on one of the bank’s particular practices—like the efforts against Chase’s investment in the environmentally devastating practice of mountaintop removal, or the protests against the bailouts that followed the 2008 financial crisis, after the fact—the goal here was preemptive: break up Bank of America and force a radical, necessary rethinking of our financial industry.

What is wrong with Bank of America anyway? Matt Taibbi, as usual, puts it bluntly:

This bank has systematically defrauded almost everyone with whom it has a significant business relationship, cheating investors, insurers, homeowners, shareholders, depositors and the state. It is a giant, raging hurricane of theft and fraud, spinning its way through America and leaving a massive trail of wiped-out retirees and foreclosed-upon families in its wake… all of us, as taxpayers, are keeping that hurricane raging.

There is a Bank of America ATM branch on the corner a few blocks from my house. I walk by it at least once a day, often more times than that. As I look at its shiny ATMs behind the squeaky-clean glass windows, I think about the small restaurant that used to be there, about the shoe store that was there before that and about how Bank of America has failed but won’t go away. I think about how those ATMs are made possible through money that should be invested in schools, in social services, in anything other than this bank.

I also think about how the company’s stock price hit a low of $4.92 in December, losing over 55 percent of its value in the past year, including 40 percent of that in three months. I think about how it is rumored to be retreating from some parts of the country as its financial woes deepen and it looks for ways to cut costs, meaning that it will close branches in “less profitable” areas. Or how it has absorbed tens of billions of dollars in mortgage-related loses and stands to lose tens of billions more from the continuing foreclosure and housing crisis. How in October 2011 the bank moved trillions of dollars of risky derivatives from its Merrill Lynch unit to its retail bank, a move that effectively means that these trillions of dollars of risky investments are now FDIC-insured by taxpayers. The Fed encouraged this in order “to give relief to the bank holding company”—a justification that shows, once again, how the interests of big banks are prioritized over those of the rest of us. I think about how it is already morally and financially dead, a “zombie bank” surviving through bailouts, legal loopholes and dubious accounting. I think about how it is under investigation for predatory lending practices and about how it has invested $4.3 billion in the nightmarish coal industry.

I think about all this and get angry. I usually kick at the curb as I cross the street. Sometimes I walk on the other side of the street to avoid having to walk directly by the BofA kiosk. Sometimes I want to act like the crazy New Yorker I am and stop whomever I see in there to tell them all these things and make them promise to close their account.

To make doing so easier, the Fight BAC campaign has as its first goal a nationwide educational effort to ensure that everyone, everywhere, knows how bad BofA is and why. We want people to not have anything to do with this bank, to move their money on the March 15 Move Your Money Day (using this simple tool) and to make sure that, this time around, unlike in 2008, “too big to fail” is exposed as a myth that protects the interests of the financial industry instead of the people. But it is also a campaign to present alternatives and ideas about what we, as active citizens, can do to create real alternatives to the financial industry. One excellent example of this is the 325-page white paper that the OWS Alternative Banking Working Group wrote to the SEC. This campaign isn’t relying on politicians or the government to break up the failed banks; it’s calling on people to rethink our financial industry at its core.

Many of the actions will be symbolic: protests where people bring parts of their homes and pile them in front of a Bank of America to symbolize the way it breaks up homes through fraudulent mortgages and foreclosures; protests where we pile dirt to symbolize the mountains destroyed through coal mining; protests where we withdraw all of our money in pennies; protests where we bring our credit card bills and our student debt bills and pile them in front of the bank. We will keep disrupting foreclosure auctions to prevent houses from being sold. We will have general assemblies at their stockholders’ meeting in May, where we will hold a conversation about what breaking up the bank means to us and what we will want to do with its collective wealth—with our collective wealth.

February 29 was the beginning of the campaign. On March 8, International Women’s Day, the nationwide Women Occupy group will target Bank of America in a variety of creative actions. On March 15 there will be a Move Your Money Day during the Occupy Homes Week of Action against banks. Throughout all of this we are asking everyone to imagine what it would mean if through protests and media and educational campaigns we could break up one of the largest financial institutions in the country and, in doing so, lead the way to real alternatives.

Manissa McCleave Maharawal is a writer, activist and a doctoral student in the anthropology department at the CUNY Graduate Center. She has been involved with and written extensively about the Occupy movement since it started.

Can OWS bring down Bank of America?

New Hampshire’s No Coal No Gas campaign deployed kayaktivists and a garden blockade as part of its latest day of mass action aimed at closing Merrimack Station.

Sudan’s generals have torn up the transition playbook. But don’t count out the masses

This movement is taking money away from fossil fuels, and it’s working

Is this a strike wave?