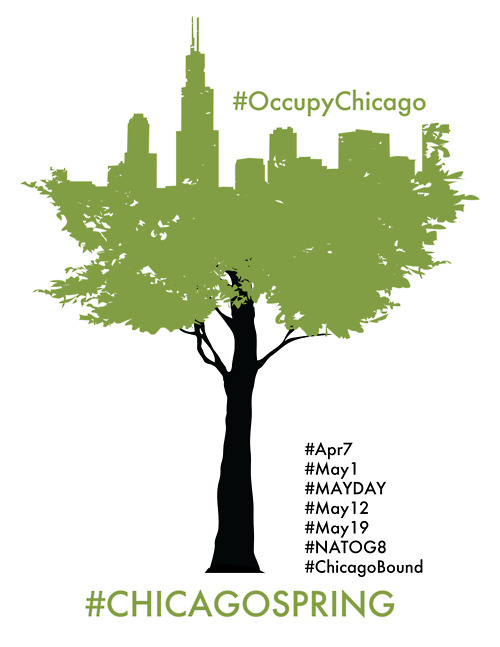 Taking nearly everyone by surprise, the White House announced last Monday that the world’s economic leaders with the G8 would not be enjoying the sights and sounds of a democratic #ChicagoSpring. The announcement that the G8 would be skipping President Obama’s hometown in favor of the much more remote and secure Camp David location reveals the fears the administration has of public assembly and popular protest.

Huffington Post’s Julie Pace reported that “security and the possibility of protests were not factors in the decision” made by the White House. Not a security concern? That is a hard pill to swallow, considering the city expects to spend between $40 and $65 million to police the Chicago protests and Obama’s recent signing of HR 347, the “anti-Occupy” law officially known as the Federal Restricted Building and Grounds Improvement Act of 2011. Clearly, the administration is anticipating “security concerns” regarding the thousands of citizens nonviolently demanding more democracy, justice and peace.

Sugar Russell, an activist on the Occupy Chicago Press Committee, spoke with me via email about the Chicago Spring and the G8 move. “The location of G8,” said Russell:

will not affect our plans to voice dissent against the atrocities that G8 inflicts upon the global population. The move signifies that they are afraid of the global voices that will be gathered in Chicago and that they feel the need to hide.

While the G8 summit has been rescheduled for May 18–19, NATO leaders will still meet in Chicago on May 20–21. Even though most activists consider this a people’s victory—one of the key goals of rallies and marches (and the threat of them) in nonviolent strategic action is a public show of force—some have speculated that the NATO-G8 may also split what was shaping to be a historic union of antiwar and economic justice groups. The Occupied Chicago Tribune, however, claiming victory for the relocation, printed a joint statement from Occupy Chicago and CANG8 that suggests the movement has, in fact, been strengthened:

The G8 moving to Camp David represents a major victory for the people of Chicago. The leaders of the 1% are moving because of the overwhelming resistance to the NATO-G8 war and poverty agenda in Chicago. Our city is filled with tens of thousands of people who are struggling to keep their heads above water, fighting against the effects of the economic crisis caused by the leaders who would have been gathering here. The communities of Chicago are fighting to save their schools, keep healthcare available, and to defend their jobs from cutbacks that are a hallmark of the governments of the G8.

The city has carried out a campaign to intimidate and vilify protesters, claiming that protests lead to violence. In fact, the main source of violence in the world today is the wars being waged by NATO and the US.

We will march on May 19 to deliver our message: Jobs, Housing, Healthcare, Education, Our Pensions, the Environment: Not War! We and tens of thousands will be in the streets that day for a family-friendly rally and march, with cries so loud they will be heard in Camp David and across the globe. We will be in the streets that day to fight for our future, and speak out against the wars and their cutbacks are designed to benefit the 1% at the expense of the 99% of the world.

Russell affirmed Occupy Chicago plans to continue focusing on the Chicago gatherings, which includes an April 7 kickoff rally for #ChicagoSpring, the May 1 “Day without the 99%” and the People’s Summit and Occupy Festival on May 12–13. “We are sure that there will be some protesters going to Camp David,” said Russell about the NATO-G8 protests on May 19–21, “although we are already receiving a groundswell of support from around the country. People are letting us know they will be in the streets of Chicago this spring.”

Ministerial meetings and summits like the G8 have increasingly been held at remote locations to lessen the likelihood of mass protests, which have become common venues for democracy and global justice activists to mobilize around. When the G8 was last in the U.S., it was hosted at the isolated and luxurious Sea Island Resort in Georgia.

The institutional violence and anti-democratic nature of NATO-G8 is again affirmed by Obama’s unilateral decision to move the G8 summit. Neither of these bodies allow for the people to participate directly in crafting the policies that affect so many and to characterize the talks as needing protection from interruption—as HR 347 does by criminalizing the protesting of persons or events under Secret Service’s direction—reveals the authoritarianism of the system. Without provocation, it is unlikely that the state will outright suppress the Occupy movement with direct violence. Rather, the state needs the force of the law to protect itself from protest and civil unrest, particularly when that defiance is nonviolent and more difficult to counter.

The assault of peoples’ rights to assemble and petition are under attack by Congress and the President—the so-called democratic representatives of the people. “HR 347,” said Russell,

interferes in [our] ability to petition our government directly through means of peacefully protesting by making it a federal charge to do so. Our country has operated and been able to keep our elected officials safe without making peaceful protesting a federal crime, so we ask, “Why now? What has changed?” The answer is that there is a popular uprising happening in this country and our government is scared of what the people have to say about how they are operating.

Turning the tide: inside a Texas city’s struggle to stop deportations