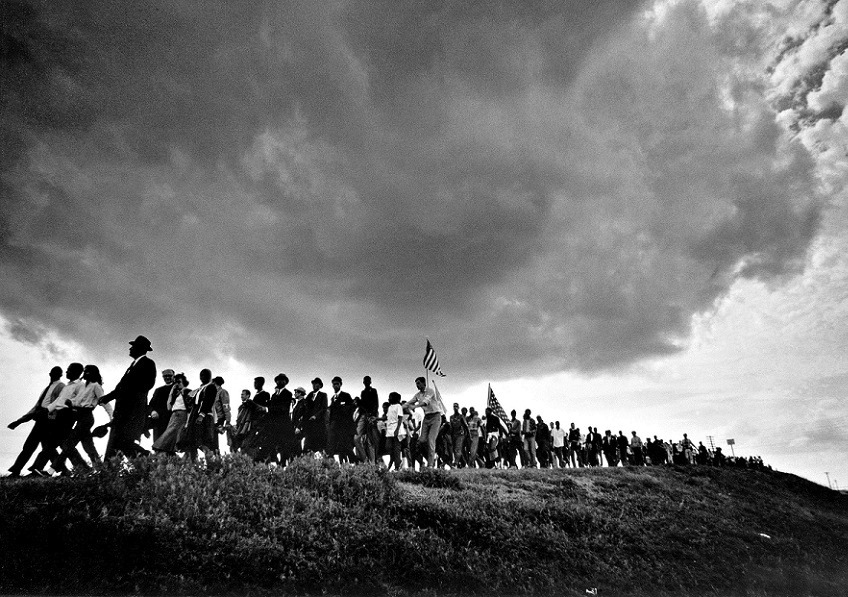 Forty-seven years ago this week, Martin Luther King Jr. set out with 3,200 civil rights activists from Selma to Montgomery, the capital of Alabama, to call on the state and the nation to dismantle the structural obstacles to suffrage for African Americans. Two weeks before, on Sunday, March 7, 1965, hundreds of marchers had been brutally attacked on the Edmund Pettus Bridge by Alabama state troopers and local police officers on horses wielding clubs and whips amid a storm of tear gas.

“Bloody Sunday” horrified the nation and motivated a reluctant Lyndon Johnson to provide federalized National Guard protection for a renewed march, after the movement succeeded in getting a court order to allow the demonstrators to proceed. As federal judge Frank M. Johnson Jr. ruled, “The law is clear that the right to petition one’s government for the redress of grievances may be exercised in large groups … and these rights may be exercised by marching, even along public highways.” Over the next four days, the marchers walked 50 miles, sleeping at night in fields alongside Jefferson Davis Highway. Over 25,000 people arrived at Alabama’s Capitol building on March 25. Less than five months later, Johnson signed the Voting Rights Act of 1965 into law.

Though this watershed moment took place nearly five decades ago, its power remains undiminished. For years this event has been marked with gatherings, speeches and reenactments of this now-archetypal journey for justice. Nonviolent change is often a journey that is new and uncharted—breaking new ground, setting a new direction; at the same time, its power can also derive from retracing and giving new meaning to a past path for freedom. It can be improvisational and creative. And it can be rooted in acts of remembrance and reenactment. A word that works for both of these realities is “pilgrimage.”

This year, the League of United Latin American Citizens (LULAC), the Hispanic Council and the Labor Council for Latin American Advancement (LCLAA) joined with countless of other civil rights organizations in the Selma-to-Montgomery march as an opportunity to take a stand against Alabama’s anti-Latino legislation, HB 56, considered the strictest anti-immigrant bill passed by any state in the U.S. The president of the Leadership Conference on Civil and Human Rights, Wade Henderson, wrote:

Last week’s 47th commemoration of the Bloody Sunday March of 1965 marks a new phase in the civil rights movement. It represents a turning point for people from all backgrounds, who are joining together, not only to remember our shared past, but also to fight for a shared future. It’s a moment of recognition from all sides that, though our nation has progressed since 1965, we are not yet finished with the struggle to include everyone in the fullness that American life has to offer.

For Henderson, the past and the present are colliding, and just as people took action half a century ago, it is critically important to draw on that same energy and example to continue to struggle: “The state of Alabama … is once again using fear and intimidation as weapons against those without power. This time, the targets are Latinos and the aim is to drive them from their homes and their communities.”

The original Selma-to-Montgomery march was not a choreographed or historically enshrined ritual. It was a radically ad hoc set of strategies that had to be revised over and over again until, improbably, the waters parted. Improvised as it was—playing each new factor by ear—the journey nonetheless was a pilgrimage: “a sacred journey” or “a journey of transformation.”

At the same time, this ongoing pilgrimage deepens the march’s original meaning by using its memory on behalf of unfinished business. Like many geographical nodes of the civil rights itinerary spread across the South and beyond, Selma is a destination that joins past and present in new and creative ways. The route to the capital is even memorialized as the Selma-to-Montgomery Voting Rights Trail, a U.S. National Historic Trail.

The anthropologist James Preston speaks of pilgrimage as “spiritual magnetism.” Theologian Richard R. Niebuhr writes that pilgrims “are persons in motion—passing through territories not their own—seeking something we might call completion.” For me, pilgrimage is a journey to the depths of reality, including its woundedness and sacredness, seeking the power and possibility of healing and transformation.

Pilgrimage, in this sense, is not simply a solo act—it is not simply a quest for individual fulfillment. It is a process of engaging the reality of injustice and violence as well as the potential for nonviolent change, and even reconciliation.

This is why I have a keen interest in the many forms of social change that literally involve movement, including Gandhi’s Salt March, the United Farm Workers’s 1966 march to Sacramento, the decades of nonviolent civil disobedience at the Nevada Test Site (which requires a journey into the simultaneously empty and rich Nevada desert), or innumerable marches organized by the peace, environmental, labor and Occupy movements.

Marches, walks and processions are not simply a way to “be visible”; they are symbolic journeys from A (the grinding present) to B (a more just and peaceful world). They are dramatized expeditions to a center of significance. They seek a metamorphosis of conditions. And they deliver the message in person. Such journeys accrue their meaning by taking each step, by sleeping by the side of the road, by gauging the tremendous dangers and possible opportunities of doing so. No doubt the Southern Christian Leadership Conference or its allies could have rented a fleet of buses to make the trip from Selma to Montgomery in about an hour. The meaning of the experience, though, included the totality of the journey. Without this tremendously symbolic and tremendously physical dimension, the exercise may well have been pointless.

In their book The Archetype of Pilgrimage, Jean and Wallace Clift identify many motivations that spur pilgrims to set out: to experience a place of power; to get outside the normal routine of life so something new can happen; to reclaim a lost or abandoned or forgotten part of oneself; to give thanks; to answer an inner call; to seek pardon; to look for a miracle. While the Clifts are mostly drawing on individual-oriented pilgrimages, many of these elements are at work in pilgrimages of social liberation, like the one to Montgomery in 1965—and 2012.

In 1995, on the 30th anniversary of Selma, then-former Governor George Wallace attended the commemoration. The one who had once staked his political career and national reputation on such inflammatory racist rhetoric as “Segregation then, segration now, segregation forever,” held hands with African-Americans and sang “We Shall Overcome.” Colman McCarthy describes the scene:

It was a reaching-out moment of reconciliation, of Wallace’s asking for—and receiving—forgiveness. In a statement read for him—he was too ill to speak—Wallace told those in the crowd who had marched 30 years ago: “Much has transpired since those days. A great deal has been lost and a great deal gained, and here we are. My message to you today is, welcome to Montgomery. May your message be heard. May your lessons never be forgotten.” In gracious and spiritual words, Joseph Lowery, a leader in the original march and now the president of the Southern Christian Leadership Conference, thanked the former separatist “for coming out of your sickness to meet us. You are a different George Wallace today. We both serve a God who can make the desert bloom. We ask God’s blessing on you.”

In reflecting on this exchange, McCarthy was reminded of what Dr. King had once said:

Forgiveness does not mean ignoring what has been done or putting a false label on an evil act. It means, rather, that the evil act no longer remains as a barrier to the relationship. … While abhorring segregation, we shall love the segregationist. This is the only way to create the beloved community.

Dr. King wrote an autobiographical essay entitled “Pilgrimage to Nonviolence.” As it did for him, the pilgrimage metaphor can capture for us the struggles of the journey. But it can also hold out the possibility of arriving at the spiritual center, what he deemed “the beloved community.” Such a move can, if only for a moment, reward those longings that have propelled us forward, including the desire to experience a transforming kind of power, to discover a new reality, to answer an inner call, to reclaim our true selves, to answer a call, to seek pardon—and even to experience a miracle.

Amid a deadly crackdown, protesters in Colombia are finding ways to break the stigma of dissent

The pilgrimage to Montgomery, then and now