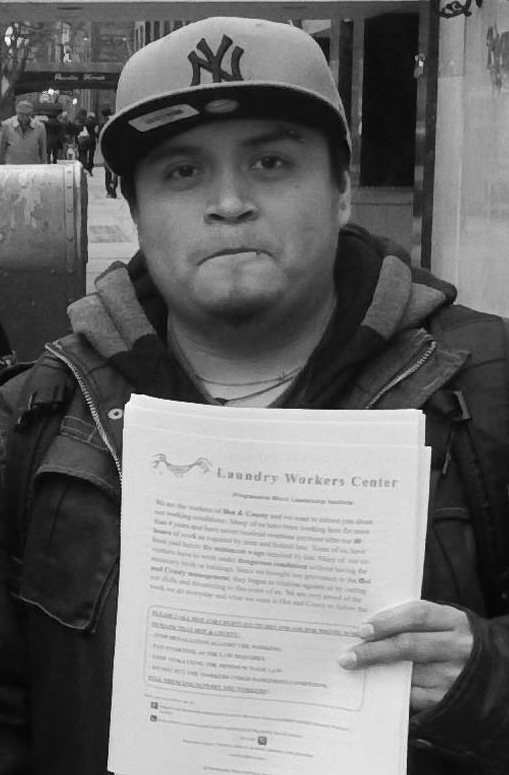 The manager of a Hot and Crusty bakery on New York’s Upper East Side watched through the window as a handful of workers speaking broken English passed out fliers to customers inside. Across the street, a private detective in a shiny black SUV surveyed the scene as potential customers and well-dressed women scanned the quarter-sheets detailing the chain restaurant’s abuses: below-minimum-wage paychecks, threats of cutting hours, refusal to negotiate with the workers for safer conditions. (Other violations were left off, including multiple accounts of sexual harassment.) One of the workers exiting the restaurant flashed those flyering a discrete thumbs-up.

The workers were from another branch of the chain bakery 20 blocks south, where they launched a successful organizing campaign with the help of the Laundry Workers Center. Now, as they continued to push for negotiations, the team was expanding to other restaurants to put pressure on the owners.

A coalition including Occupy Wall Street, unions and community groups have called for “a day without the 99%” on May 1. One of the greatest challenges in preparation for that has been organizing precarious workers — those in non-unionized sectors like restaurants, domestic care, retail and freelancing, where jobs turn over fast and some lack U.S. work permits. Yet the Laundry Workers Center, which is part of the May Day coalition, is organizing worker-led campaigns capable of escalating to actions such as walkouts and facility takeovers if wages and conditions don’t improve. Even within unionized sectors, these types of workplace actions are rare in the United States. Yet this is just the kind of radical, unsanctioned organizing that the Occupy movement is trying to help spread through the call for a general strike that many assemblies have issued for May Day.

The Laundry Workers Center (LWC) formed last year to fill the gap between unions and charitable service providers, which help provide workers with additional skills or U.S. work permits but little more. The mission was to organize laundromats — a sector that has never been organized in New York City on a mass scale — and the group plans to launch a 15-laundromat campaign later this year.

Workers from Hot and Crusty approached the young LWC in the fall, after being turned away by a handful of other organizations. Following an eight-week crash course in political consciousness and race and gender equality, the 14 workers launched their first action on January 21, the coldest day of the winter.

Amid the falling snow and bitter temperatures, a crowd of 50 workers, family members and Occupy Wall Street activists gathered a few blocks north of the restaurant at 63rd Street and 2nd Avenue, stamping their feet and blowing hot air into cupped hands. The week before, LWC organizer Virgilio Aran had laid out his honest expectations: it was almost a certainty that the workers would all be fired. The group marched toward the restaurant chanting “Jefes, escucha, el pueblo esta de lucha!” (Bosses, listen, the people are in the fight!) Inside the building, the remaining workers walked off their stations and, together, they presented the manager with the list of their demands: improved workplace conditions and wage increases.

“You don’t know what you just did,” the manager hissed at one of the workers. Yet within months, instead of being fired, the workers had been offered keys to the store by corporate higher-ups, the branch manager asked to join the campaign and Aran won the right to organize in the restaurant — an unprecedented victory for a non-unionized workplace. Yet, behind the scenes, management is building its resistance, hiring an anti-union lawyer and threatening every worker and organizer with a lawsuit.

As the campaign builds, the stakes of repression are getting higher, with organizers warning of conspiracy charges and managers using the police and immigration offices to intimidate the workers. At one of the last actions, for example, a manager tried to disperse the protest by calling the cops. Yet the workers stayed put, even ridiculing their boss when the police couldn’t prevent illegal flyering.

“When he saw that, the boss was so nervous,” says one of the workers.

The Hot and Crusty workers are prepared to escalate as well, through walkouts, lock-ins and a possible occupation of the workplace itself — all tactics that might be expected in Buenos Aires a decade ago, but hardly in today’s mid-Manhattan. Today, the workers and their supporters plan to occupy restaurant chain owner Mark Samson’s Park Avenue office.

The workers’ fearlessness in the face of harsh consequences suggests that the campaign has become about much more than negotiating for these particular jobs at this particular chain store. Rather, it’s the beginning of a renewed struggle for precarious workers everywhere to gain power and control in their own workplaces, on their own terms.

Watch a video of a discussion about immigrant worker justice at an Occupy Wall Street planning meeting for May Day:

With eyes on May Day, OWS allies escalate against jefes